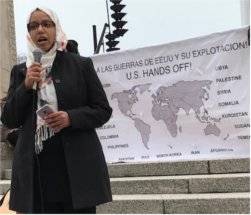 Shireen Al-Adeimi, a Yemeni-Canadian activist and doctoral candidate at Harvard. 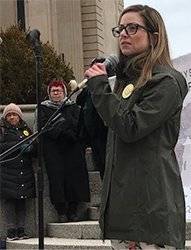 Randi Nord, a journalist
with Geopolitics Alert and a member of the Detroit branch of Workers World Party. 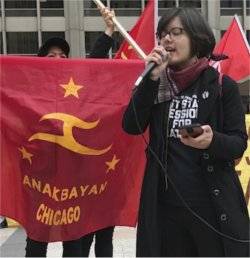 More than 300 people turned out in Chicago on April 21 to demand an end to U.S. foreign wars and to domestic repression, in an action called by the new Chicago Anti-War Coalition. After an initial rally in Grant Park, the demonstrators marched through the Loop to two more rallies, one at Trump Tower and the other at the Chicago Tribune building, chanting “Money for schools, not for war!” and “U.S. out of Syria!” They pledged to return to the streets, and called for a massive action in August on the 50th anniversary of the police riot at the 1968 Democratic Convention.