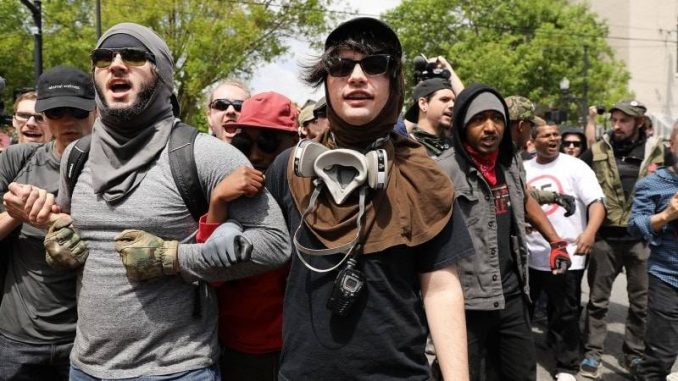 Newnan, Ga. — Hundreds of anti-fascists gathered in Newnan, Ga., on April 21 in opposition to a rally held by a neo-Nazi group known as the National Socialist Movement. The large anti-racist crowd was multinational, multigenerational and consisted of both local residents and people who came from around the region to frustrate the Nazis’ attempt to organize and propagate white supremacy.

In contrast to the large, diverse crowd, it is estimated that roughly 25 to 30 Nazis were in attendance. With the heinous acts of violence in Charlottesville last August fresh in the country’s consciousness, anti-racists made sure to come out in large numbers to send a clear message to white supremacists that while their racist and anti-immigrant agenda is supported by the state and reactionary segments of society, including President Trump, the masses at large will drown them out and shut them down.

The Greenville Street Park was enclosed by an 8-foot metal fence, double barricades and a line of shoulder-to-shoulder rifle-carrying police. The hundreds across the street who chanted down the vile hate speech emanating from the park had to enter at designated checkpoints to be frisked. People were only allowed to bring a cellphone into this “protest pen.” No signs or even water bottles were allowed.

Many other anti-fascists chose to stay in the streets, keeping their bullhorns, signs and banners, and confronting the some 700 heavily armed police from 42 different agencies, including various city, county and state forces. All downtown intersections were barricaded, armored vehicles carried reinforcement troops, and drones and helicopters circled overhead. This large group persisted in marching through downtown Newnan, their banners and signs denouncing white supremacy, as they chanted, “No Nazis, No KKK, No Fascist USA.”

An early example of the repressive government force was that multiple police vehicles pulled up within minutes of a group of anti-fascists gathering at a corner. Confronting the protesters, police pulled youth off the sidewalk, slammed individuals to the ground and handcuffed them, as others pointed their assault rifles at the unarmed crowd.

During the course of the day, at least 10 protesters were violently arrested for wearing masks or happening to rub an officer the wrong way. Clearly, their mandate to “protect and serve” did not go beyond the fascists.

Such jack-booted tactics reflect the true role of the police in the maintenance of capitalism and white supremacy. As always, they are an occupying army in working-class communities of color. It should come as no surprise that the “boys in blue,” who kill people of color regularly and with impunity, would defend their brown-shirted brothers. The brutal arrests of anti-racists lay bare the relationship of the state to the order of white supremacy. In the words of the anti-fascists, “The cops and the klan go hand in hand!”