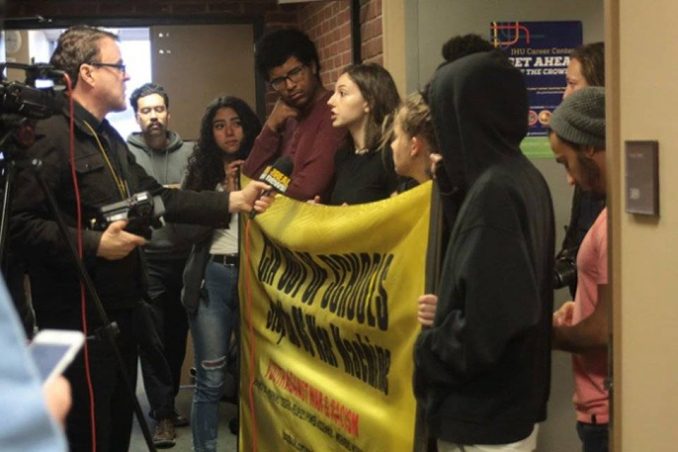 JHU also has a huge nuclear weapons contract with the Pentagon.

Ten Johns Hopkins University student activists from Tzedek (a U.K.-based charity that aims to provide a Jewish response to global poverty) and Students for a Democratic Society, plus members of Workers World Party-Baltimore and Baltimore People’s Power Assembly, protested on April 10 outside the last of three CIA recruitment events held that week at the university’s career center.

For about half an hour, the activists blocked the door with a bright yellow banner reading, “CIA Out of Schools, Stop the U.S. War Machine.” Chants such as “Hey, hey, hey, CIA, how many people did you kill today?” and “No Justice, No Peace, U.S. out of the Middle East!” echoed across the third floor of the administrative building, drawing the attention of employees working there.

It also drew security officers, who were unable to dispel the protesters. After protesting in front of the event, the activists moved the banner outside, where their chants of “Hopkins Builds Nukes!” were heard by groups of prospective students touring campus. The chants referenced a $934 million, five-year contract that Hopkins’ Applied Physics Laboratory recently received from the Department of Defense to build bases for nuclear weapons.

Youth Against War and Racism founded

This was the inaugural action of Youth Against War and Racism, a mass organization whose goal is to increase and mobilize anti-war and anti-imperialist sentiment among youth and students in the Baltimore area. Although anti-war organizations already exist here, YAWR’s founders recognized a distinct lack of concern among young people, who have been integral to the most famous and successful anti-war movements of the past.

Since their very inception, the U.S. government and ruling class have sought to expand their sphere of influence over the entire globe. The rulers first expanded their territory from the East Coast to the West by gradually stealing land, through violence and terror, from Indigenous peoples.

After spreading its control across continental North America, the U.S. set its sights overseas. From the annexation of Hawaii in 1898 to today’s U.S.-backed wars for regime change across the Middle East, the imperialist U.S. war machine has the sole purpose of protecting the assets and interests of the ruling class — not the people and not the principles of “freedom” and “democracy.” U.S. intervention only serves to destabilize entire areas of the globe and destroy the lives of the most vulnerable people in these regions.

The ongoing Syrian war is a classic example of U.S. intervention in a foreign nation — beginning with a covert CIA operation to back rebels attempting to overthrow the government and then casting that government in an unfavorable light to gain public support for that war. YAWR saw the need to respond forcefully to the recruitment events at Hopkins because it is clear that the CIA has no qualms about meddling in the affairs of other countries.

The ongoing attempts to secure U.S. world dominance affect the people here as well as those abroad. Hundreds of billions of dollars are siphoned away every year to fund the military, money that could pay teachers higher salaries, improve crumbling infrastructure and provide health care for the people. Instead, this money goes toward contracts such as the one the Department of Defense just gave Johns Hopkins to develop new military technology.

As police presence and surveillance are always higher in communities of color, and because the police are dangerous to these communities, people of color in this country are most directly impacted by the U.S. war machine, as are people of color abroad. Since the 1990s the government has been selling military grade surveillance equipment, automatic weapons and even armored vehicles to police departments across the country, including the Baltimore Police Department.

Youth Against War and Racism intends to keep the fire burning with a rally and march on May 5 commemorating the 50th anniversary of the Catonsville 9. They were nine clergy members who at the height of the Vietnam War in 1968 burned draft cards with homemade napalm outside the draft board in Catonsville, Md. To commemorate the legacy of these anti-war activists and to commit to reigniting anti-imperialist sentiment among youth, young people will say, “No to racism, no to war, no to war on Syria, and no to U.S. imperialism!”