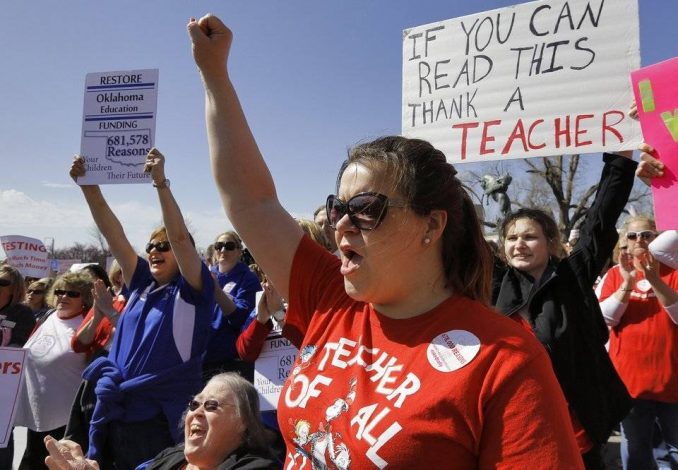 The valiant fight of Oklahoma teachers and school staff for long overdue raises and education funding culminated in a nine-day walkout in April, with active support from working-class communities around the state.

The walkout was declared over on April 12 by the Oklahoma Education Association’s executive board. The state American Federation of Teachers then held a conference call and polled their members.

By April 13, most districts expected teachers back to prepare for opening on Monday. Yet hundreds of teachers and supporters showed up at the Capitol to demonstrate. Over the weekend, the Oklahoma City AFT voted 64 percent to continue, leading that local to ask the large OKC district to keep schools closed on Monday. The district school management refused to support the teachers by closing schools, but the union sent a large delegation of members to the defiantly held Capitol rally.

Teachers statewide who are not ready to return to “business as usual” had varied reactions. Social media reflected determination by some not only to lobby with district permission, but to press the legislature by all means, including withholding their labor.

Some parent groups proposed boycotting the state tests and/or demonstrating even if schools are open. The Oklahoma Parent Teacher Association ran a Facebook poll April 12-13 asking: “Do YOU want to protest at the Capitol, in support of Oklahoma teachers, on Monday?” Some 84 percent of the 2,500 voters responded “Yes.”

Referring to walk-out marches of 50,000 educators and supporters, Oklahoma City AFT member Jesse Jackson told Workers World he is “happy we finally got Oklahoma to do something on that scale! Last May during the budget process, there were just 50 of us at the Capitol. … Teachers don’t have a lobby like the oil and gas interests do. The only thing that gets [legislators’] attention is the rank and file staying out. I’m glad we did it.”

Jackson confirmed that “the same forces that stood against teachers are for private prisons — the fastest-growing industry in Oklahoma — and it ties in with ‘New Jim Crow’ mass incarceration and with Immigration [ICE] detaining migrant workers.” He concluded, “Many are disappointed in what seems like an arbitrary ending. We want to keep the momentum going. … We were able to get something, but the fight is never over.”

Activist Camille Landry asserted that educators are “traditionally underpaid and undervalued because they are predominantly female.” Thus, there was “absolutely” solidarity from women’s organizations. In addition, “teachers at the legislature raised woman power among other intersections. Some talked about how school cuts hurt low-income, bilingual, immigrant and disabled students the hardest.”

Landry told WW of others, beside teachers, who mobilized, including Teamsters construction workers who refused to cross picket lines to renovate the Capitol, and food bank volunteers who made meals or “backpacks full of snacks” for students. She said, “The community overall did a super job of feeding kids,” noting that Oklahoma is one of the most “food insecure” states despite being an agricultural area. According to state data from 2017, more than 60 percent of Oklahoma students qualify for free or reduced-price school lunches.

Many who participated in the walkout and rallies described being told last week that “we are done talking about education” by legislators who refuse to support further taxes to close the budget gap. They reported being falsely labeled as threatening by politicians and media, but expressed excitement that dozens of teachers, with union encouragement, have filed to run for office in November.

One creative approach by the rank and file in struggle was a ­seven-day, 110-mile march from Tulsa to Oklahoma City. Led at one point by a high school marching band and greeted along the road with cheers, food and help, this action enabled grassroots community supporters to express their solidarity.

Class lessons from the struggle

Oklahoma education funding has been cut to the bone since 2008, dropping almost 24 percent over six years. But under the state’s anti-union “right-to-work” law, public workers, including teachers, are denied collective bargaining to fight back against assaults on wages, benefits, working conditions and the welfare of their students.

The recent walkout places education workers in direct conflict with powerful capitalist interests and shows the unreliability of politicians from both parties. What remains to be exposed in this struggle is that the heavy blow to education spending is due to runaway military spending and U.S. wars.

The growing wave of education strikes, plus widespread community support for these actions, is frightening big bosses across the country. An April 12 Guardian article revealed that the right-wing State Policy Network had just released a step-by-step guide on how corporate elites could damage popular support for the spreading teacher strikes. The SPN is an alliance of organizations that promote policies to weaken workers’ power. (tinyurl.com/y8b2rvc8)

Billionaires such as the Koch brothers and U.S. Secretary of Education Betsy Devos’ family are among SPN’s top financial and ideological backers.

Rank-and-file teachers and school workers in Oklahoma and elsewhere are building relationships, using social media and town meetings to discuss demands and plans. Collectively they are moving union leadership that’s more focused on politicians into responding to the will of the membership and devoting resources to the fight against class enemies.

The Democratic Party is also attempting to divert the struggle away from rank-and-file militancy and into the ballot box. The effort to funnel actions by education workers and other social movements into a mobilization around the 2018 elections may be even greater than in years past.

Going forward, Oklahoma educators deserve solidarity to consolidate their gains, to make their unions more militant and to confront new efforts by right-wing politicians. Punitive legislative moves include a ballot proposal to reverse the tax increases that the struggle won, as well as anti-strike measures.

But given the historic and continuing stranglehold of big business, purely electoral struggle is not the answer. For education workers, keeping a focus on building independent social and worker power will be decisive.

The Oklahoma actions, like those in West Virginia and Puerto Rico, are inspiring education workers in other localities, including Kentucky, Arizona, Colorado and Wisconsin.

Kentucky’s governor, Matt Bevin, is a hedge fund owner who appointed hedge fund directors to the teachers’ already insecure pension system. (tinyurl.com/yafnjup9) The Kentucky Education Association responded to Bevin’s recent veto of school funding bills HB 200 and 366 by calling a Day of Action on April 13 in Frankfort, the capital.

Demands reflecting the rank-and-file #120Strong movement included restoration of funding for preschool through college education and protection of pensions. About 30 counties canceled school, citing either the need to “advocate for our students and public education” or “the high number of teacher and staff requests for sick leave.” (tinyurl.com/y8ephy3v)

Some 10,000 school workers, students and supporters, including the Poor People’s Campaign, chanted and cheered speakers outside the Capitol on April 13 and spoke their mind to legislators inside. By evening, KEA informed members that the governor’s veto of school funding bills had been overridden, providing “much needed P-12 funding for the next biennium.”

But the KEA acknowledged continuing “serious concerns” such as regressive taxation. Other legislation attempted to restore the earlier sneak attack on teachers’ pension benefits, leaving them unresolved for current and future Kentucky teachers. (facebook.com/KEAmembers)

Teachers, school workers and community supporters in Arizona have launched the #RedforEd movement, an initiative of the rank-and-file-led Arizona Educators United. This movement is encouraging the Arizona Education Association to provide greater support for demands being put forward, including a 20 percent raise and the return of education state funding to its 2008 level.

Over 1,000 schools in Arizona held walk-ins April 11 — rallying outside before walking into schools — by teachers and school workers, who received broad community support. Two days later, Arizona Gov. Doug Doucey — who had earlier called the teachers’ organizing “political theater” — announced he would raise their salaries by 20 percent within two years. Education workers were skeptical of this vague promise backed by no commitment to funding sources. The #RedforEd movement is calling for action by teachers to keep up the pressure on politicians.

In Colorado, Englewood schools announced their closure on April 16, as education workers there said they would walk out and convene at the state legislature to rally for higher wages and increased education funding by the state.

In Milwaukee — where workers and oppressed people have been suffering massive austerity attacks since 2011 by Gov. Scott Walker and the banks — the Milwaukee Teachers Education Association packed an April 10 school board meeting with hundreds of angry members, supporters, parents and students to fight back against severe cuts to city schools. Wide support is mounting for an April 24 picket to defend public schools. The MTEA will also be joining Voces de la Frontera’s May 1 mobilization, Day Without Latinxs and Immigrants, in Waukesha. (mtea.weac.org)

All signs point to the wave of strikes and actions by education workers continuing and spreading.

The writers were part of a WWP Strike Support contingent on the ground in Oklahoma from April 1 to April 4.