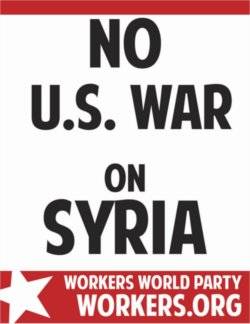 The Chicago Anti-War Coalition, a new formation composed of dozens of organizations, will rally and march on April 21 to demand an end to wars at home and abroad.

The coalition was formed in February. It seeks to mobilize the building anger in this city against wars being waged by the U.S. government on peoples throughout the world, including here in the U.S., where racism and police violence run rampant, and schools and housing decay from lack of resources.

Why do organizers believe this to be the right time to relaunch the anti-war movement in Chicago? Because, according to coalition literature, the U.S. government “continues to regularly bomb and drone-strike in Afghanistan, Iraq, Syria, Libya, Yemen and Somalia, and is funding a murderous covert drug war in Mexico. Now it is threatening new wars against North Korea, Iran and Venezuela, and has adopted a dangerously more aggressive policy on nuclear war, while engaging in dangerous brinkmanship with Russia.”

The action will begin with a rally at Congress Parkway and Michigan Avenue, followed by a march through the Loop to a second rally at Tribune Tower. Speakers will include Maria Hernandez of Black Lives Matter, Joe Lombardo of the United National Antiwar Coalition, Randi Nord of Geopolitics Alert, Frank Chapman of the Chicago Alliance Against Racist and Political Repression, Maya Arcilla of Anakbayan-Chicago, Dr. Anne Scheetz of Physicians for a National Health Program and Kathy Kelly of Voices for Creative Non-Violence.