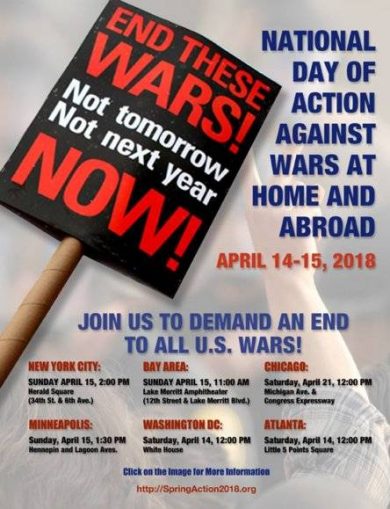 SpringAction 2018, a significant coalition of hundreds of progressive groups, has been mobilizing for anti-war demonstrations across the U.S. on April 14-15. Its appeal calls for an end to all U.S. wars and militarism along with fighting white supremacy at home and defending immigrant rights, as well as protecting the environment.

Radio host Mimi Rosenberg invited three of the New York based organizers of these demonstrations on her April 4 Morning Show on Pacifica Radio 99.5 FM, WBAI.org, to discuss these protests on the 50th anniversary of the assassination of Dr. Martin Luther King Jr.

The following are excerpts from the comments Kayla Popuchet, a Haitian-Peruvian student activist; Jose Monzon, a Black anti-war activist and member of Black Alliance for Peace; and Sara Flounders, co-director of the International Action Center and member of the United National Antiwar Coalition, made on the show.

Rosenberg: “You cannot remain silent,” say our next guests, when faced with the extreme militarists who have just joined the Trump administration, Mike Pompeo and John Bolton, calling for war on Iran and north Korea and new attacks on Palestine. What are the motivators for the “End U.S. Wars” action?

Popuchet: A call to end U.S. violence against oppressed people of the world, to end the U.S. putting interest in “resources” over people, and to draw the connection between U.S. militarism against oppressed nations, and the way the government treats our own people. The U.S. gives millions of dollars to Israel, where fascist IDF [Israeli Defense Forces] troops treat Palestinians as subhuman, the same way the NYPD [New York Police Department] treats people of color. The NYPD was trained by the Israeli forces.

Monzon: For me, a primary motivator has been [King’s] anti-war position, which has been a largely forgotten part of his legacy. It is no coincidence he was murdered the year after his “Beyond Vietnam” speech and at the same time he was organizing with sanitation workers.

To me, 50 years later, things are largely the same. Most of our tax dollars go to U.S. wars of aggression against poor people of color abroad while at the same time [the U.S.] is cutting programs for working people and people of color here at home. To me, we are living King’s famous quote that every bomb dropped in Vietnam explodes here at home in the form of less services for everyone.

Rosenberg: How do you see mobilization around anti-war, anti-imperialist, anti-globalization, against racist oppression with the youth community?

Monzon: We went to the March for Our Lives [on March 24] and gave out a lot of material on anti-war actions, Black Lives Matter, and people were very receptive. I think that even though the motivating factor has been opposition to personal “gun violence,” I think that there is a heightened sense of a need to oppose militarism and the assaults on marginalized people in this country.

I think the way to mobilize and link it for people is really to say: “Look, a large part of the reason why we don’t have services here at home and that there is a lack of education and health across the board is that so much money that should be going to creating a more equitable society here is being spent to destroy other nations abroad.”

Popuchet: My generation of youth, we are fighting back against the terrorism that threatens us. Being an oppressed person, I walk through the streets being nervous about the police, and that’s the way people in Palestine, Afghanistan, Iraq have felt their entire lives, because of my own government.

Rosenberg: What are the demands being raised at the anti-war demonstrations on April 15?

Popuchet: We oppose sanctions by the U.S. government because those kill people. We oppose U.S. nuclear threats. We oppose U.S. involvement in elections [in other countries]. Just look at what they did to my country in Latin America. We are opposing U.S. funding fascist states such as Israel and we also oppose the state violence that happens within our own borders.

Monzon: We are saying fund human needs and not endless war. So instead of spending money to destroy nations, let’s spend money to provide services here at home like universal health care and education.

Rosenberg: How do you see a way to move beyond a reactive strategy, to a more permanent solution to implement the goals you are stating?

Monzon: A big part of the strategy needs to be a revitalization of the anti-war movement. We can see that other movements have revived in the last few years in the Occupy movement, Black Lives Matter, #MeToo. If we can rebuild opposition to U.S. war, similar to the Vietnam era, if we can rebuild that movement, that will propel us forward.

Popuchet: The NRA [National Rifle Association] is the product of a larger system. If we can build consciousness about that, as part of the anti-war movement, we can apply that to any type of U.S.-foreign interaction. The U.S. is beating the war drums against Russia, against the DPRK [Democratic People’s Republic of Korea], while at the same time deploying more troops into the Black Sea area and Eastern Europe. If that’s not building and gearing up for a war, I don’t know what is.

Flounders: Thanks so much for this program and particularly on this day for Martin Luther King Jr., who made these links 50 years ago, and paid the price. The April 14-15 rallies are organized by a large coalition, so we are expecting an important mobilization in cities around the U.S.

Here in New York City, on April 15, we rally at 2 p.m. at Herald Square, 34th Street and 6th Avenue, and then we march to Trump Tower. At www.springaction2018.org you will see a list of hundreds of endorsers, a broad spectrum of the U.S. political movement that doesn’t always come together, but that has now united to oppose all U.S. wars, sanctions, coups, and the escalating attacks, repression, racism and cutbacks at home.

Monzon: People should come out on April 14-15, thinking of the increased U.S. war mobilizations, remembering that the U.S. has the largest arsenal of nuclear weapons in the world. There is a real potential to endanger all life on the planet. This is a fight for our lives.

Popuchet: For the sake of oppressed peoples internationally, there needs to be a revival of the anti-war movement. People here in the U.S. need to come out on April 14-15 to show their solidarity with the people who the U.S. has disenfranchised and marginalized. And not only for them, but also for the disenfranchised within the U.S., we need to stand together and call for an end to the violence, because we know the U.S. government is not going to do that.

Rosenberg: We’ve got to build that mass national movement, for people’s power. Let’s get to that demonstration.