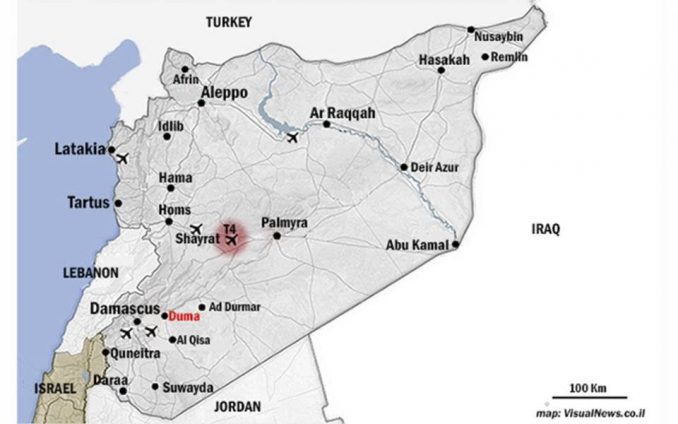 The night before April 12 was calm. An expected attack by the U.S. Armed Forces and their allies on Syria had not yet taken place. But many people in Damascus and across the country expect that the hostile and threatening language of Western government leaders — as spouted by President Donald Trump — and their diplomats on the United Nations Security Council, will be followed by missiles, bombs and destruction.

“They have already published lists of targets they want to attack,” Nabil M., a retired agricultural engineer, told us. His neighbor Hussam, who formerly worked for Mercedes-Benz in Syria, assumes that the U.S. Armed Forces “could bomb telecommunications, Syrian television, the presidential palace, ministries, bridges and military installations” in and around Damascus.

Hussam, shrugging his shoulders in response to the comment that most of the targets he named are civilian institutions whose bombing is prohibited under international law, said: “What did they do in Mosul in Iraq, in Deir ez-Zor and in Rakka here? The United States Army has no regard for international law.”

Heike W. is a businesswoman from Germany who has lived in Syria for more than 30 years.  She says that an imminent war will be “an American-Russian confrontation,” located in Syria.  This is international, she stresses, and is about controlling trade routes and resources, pointing out that China’s New Silk Road project challenges the West. Heike is convinced that “the U.S. and the other Western powers will not permit this region to be outside their control.”

Opponents of the Syrian government do not talk about it, but may silently hope that an attack by the West could “cut the head off” the Assad regime they hate. Others, however, shake their heads and fear further destruction and an extension of war and chaos.

The Syrian military, government and president are on alert, although the details [of their plans] are unknown. On April 12, Foreign Ministers Walid Muallem and Ali Akbar Welajati met in Damascus to discuss closer cooperation between Syria and Iran. Welajati is the foreign policy adviser to Ayatollah Ali Khamenei, Iran’s religious leader.

Israeli missiles kill 14 on Syrian base

At least four Iranian soldiers [and 10 other people] were killed in an Israeli attack on a Syrian military base in Palmyra in Homs province on April 10. Israel’s fighter jets attacked the base from Lebanese airspace, in violation of international law. Syrian air defense systems destroyed six of the eight missiles fired by Israeli fighter jets.

The Israeli Security Cabinet met on April 12 to discuss the situation in Syria and possible Western military operations against the country. Cabinet members said Israel should be as much a part of a joint Western attack as Saudi Arabia.

Germany is likely to have already marked and documented possible targets, using its reconnaissance Tornado aircraft and AWACS surveillance aircraft under the U.S.-led “anti-IS alliance.” Syria is like an open book to NATO monitors.

A Syrian government representative in Aleppo, who wants to remain anonymous, expressed incomprehension about the German government’s attitude in an interview with Junge Welt.  He said that Germany is a beacon culturally and economically — and in giving humanitarian aid. But in the Middle East, he emphasized, Berlin follows the U.S. and Israel.

The economic sanctions against Syria, the official said, harmed not only the Syrians, but also the German economy. Yet German leaders are sowing hostility towards Syria. He asks: “What do they want from us? You want my table, my jacket? I can give them both if they need them. As far as I have heard, the German population does not want war, not even in Syria. Why does the German government do the opposite of what the people want?”