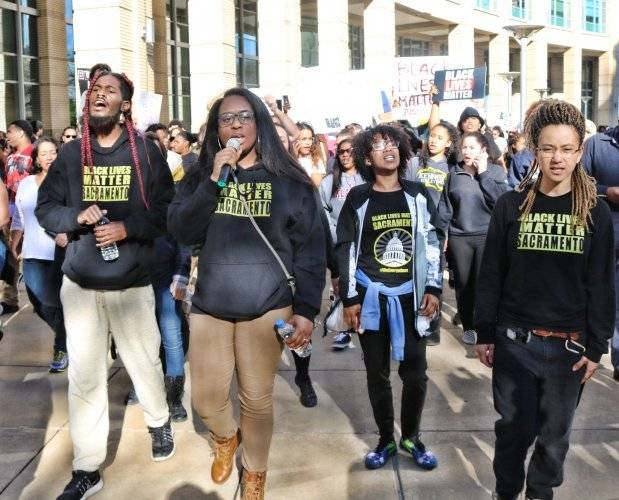 Sacramento youth shut down I-5 to demand justice for Stephon Clark.

The heinous murder of 22-year-old African-American Stephon Clark by the Sacramento, Calif., police on the night of March 18 continues to make national headlines, thanks to the heroic vigilance of the Black Lives Matter movement, national allies and social media.

Police shot at Clark 20 times in his grandmother’s backyard. The police said they “feared” for their lives, claiming Clark had a gun in his hand. But they did not find a gun — they found him clutching a cell phone.  Nevertheless, the cops handcuffed Clark as he lay bleeding to death.

Results of a March 30 independent autopsy, requested by Clark’s family, confirmed eight of the 20 bullets hit him in the neck, back and thigh, causing widespread breakage of bones and massive bleeding, especially in his lungs.  Based on these findings, Bennet Omalu, a forensic pathologist, stated, “His death wasn’t instantaneous. Death took about three to ten minutes.” (Washington Post, March 30)  Omalu stated that the police were facing Clark’s back when they starting shooting at him in the dark.

An “official” coroner’s autopsy has not taken place as of April 2. Clark is survived by his partner, Salena Manni, their two young sons, Cairo and Aiden, as well as his grandmother, Sequita Thompson.

There is video footage from a police helicopter and police body cameras of Clark’s shooting. But seven minutes after the shooting, the police muted their body cams, suggesting a cover-up. The two police officers who killed Clark have been put on “adminstrative leave” pending a police “investigation.”

According to the Washington Post, six people have been killed by police in Sacramento since January 2015 — five of the six were Black men, including Clark. (March 30)

Stevante Clark, Stephon’s brother, stated, “I know there could have been another way; he didn’t have to die. You’re going to know his name forever. You’re going to remember it like … Mike Brown, Eric Garner, Tamir Rice.” (Washington Post, March 21)

Following Clark’s murder, Black Lives Matter activists organized hundreds to shut down a section of Interstate 5 on March 23. Then protesters proceeded to the Golden 1 Center, where the home team, the National Basketball Association’s Sacramento Kings, was scheduled to play the Atlanta Hawks.

The protesters shut down the arena, keeping out the majority of fans there to see the game. The principal owner of the Kings, who is South Asian, joined by all the Kings players, the majority of whom are Black, made a public statement in sympathy with the Clark family.

Two days later, on March 25, before the Kings were scheduled to play the Boston Celtics, both teams wore “#StephonClark” on their warm-up shirts.  A former Kings player and an NBA All-Star, DeMarcus Cousins, now with the New Orleans Pelicans, offered to pay for Clark’s funeral.

Stevante Clark disrupted a March 28 community forum at a Sacramento City Council meeting, repeatedly shouting out his brother’s name in front of the mayor. Protesters outside the meeting then marched again to the Golden 1 Center where the Kings were playing the Dallas Mavericks. They blocked the entrance and once again caused a small turnout by the fans. As protests continued on March 31, a police car hit a 61-year-old woman, injuring her, and then left the scene rapidly, in what was described by those at the scene as “hit-and-run.” (Washington Post, April 1)

Matt Barnes, another former player with the Sacramento Kings, an NBA champion who is now retired, helped to organize a “March for Action!” rally at Cesar Chavez Plaza in Sacramento on March 31, which hundreds attended. Barnes has demanded that the district attorney and state attorney general prosecute the cops who killed Clark.

Barnes told “theundefeated.com,” a sports publication, “Twenty shots is a slaughter. People don’t even get shot 20 times in the video game ‘Call of Duty.’ Twenty shots [at] a 22-year-old boy is ridiculous. You have to have some accountability. They are not going to be able to sweep this under the rug now. The press secretary said this was an isolated situation in Sacramento. That couldn’t be further from the truth. This is a nationwide situation that needs to be addressed.” (March 30)

Barnes is on target with these words. For instance, on March 31, Louisiana Attorney General Jeff Landry announced that the two white Baton Rouge police officers involved in the July 2016 fatal shooting of Alton Sterling, a 37-year-old Black man, will not be charged with his murder. The police officer who shot Sterling in the back was fired while the other officer, who pinned Sterling to the ground, was suspended for three days. Both are scheduled to have “disciplinary hearings.”

More than a million people, many of them youth, converged March 24 in the streets across this country to demand “gun control.” Their action was sparked by the Feb. 14 massacre of 17 students at Marjory Stoneman Douglas High School in Parkland, Fla. During these marches, a number of Black youth and other youth of color made it clear, with their voices and signs, that they are against any police occupation of the schools as a solution to gun violence. The youth were clear that they would be the ones scrutinized and demonized by the cops.

During the marches, there were many signs demanding the disarming of the police. This is a righteous concern when police have no trouble apprehending alive white supremacist mass shooters like Dylann Roof, who admitted to the massacre of nine Black church-goers in Charleston, S.C., in 2015, and Nikolas Cruz, accused of slaughtering the Parkland students. But police continue to shoot to death Black victims like Clark and Sterling, who are then demonized by both the police and the mainstream media as criminals or as having criminal-like behavior.

The police are a repressive force trained under capitalism into a white supremacist mentality, so that cops treat people of color, especially the youth, as being expendable and less than human.

But this racist police war is creating a political answer, especially through the Black Lives Matter struggle, no matter what form that resistance may take. Sacramento Black Lives Matter has issued a joint call with the Anti Police-Terror Project in Oakland, Calif., for a “National Day of Action!  Stephon Clark WILL Get Justice!” on April 4. (tinyurl.com/yd972tv8)

Communities everywhere are called to organize local protests on April 4, marking the 50th anniversary of the assassination of the Rev. Dr. Martin Luther King Jr., in protest of Stephon Clark’s death.