Los Angeles — The achievements of union and community organizer Chris Silvera were celebrated on March 10 when he was honored here with the Lifetime Achievement Award of the Teamsters National Black Caucus of Southern California. 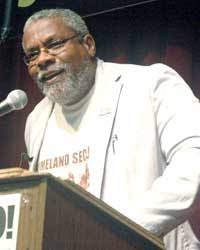 Silvera, based in Long Island City, N.Y., is a leader greatly admired throughout the U.S. for his militancy and strategic actions. He is the secretary-treasurer and principal officer of Teamsters Local 808. The local represents a diverse group of workers, including railroad, building maintenance, factory and public sector. Silvera is the longest serving principal officer in the Teamsters union.

The Teamsters have a long, revolutionary history in the Black liberation struggle. TNBC was formed in 1971 to ensure that Black workers are represented in key leadership positions in the union, and to promote affirmative action and educate Black communities in and out of the union.

The effectiveness of this work is apparent, as the Teamsters have a wonderful representation of Black leadership, including women. They are a powerful lesson in how a progressive union can lead by example.

The TNBC SoCal branch is nationally recognized as a revolutionary, progressive branch, so it was fitting that it chose to honor Silvera. The event was organized by Robert Turner, a major progressive force in fighting for the rights of Black workers.

Silvera was introduced by Sen. Maxine Waters, who highlighted the importance of Silvera’s victory in having International Workers’ Day (May Day) proclaimed as an official holiday for Local 808 workers.

In his acceptance speech, Silvera stressed the importance of revolutionary leadership. He opened with a quotation from the Rev. Dr. Martin Luther King Jr.: “Human progress is neither automatic nor inevitable. Even a superficial look at history reveals that no social advance rolls in on the wheels of inevitability. Every step towards the goal of justice requires sacrifice, suffering, and struggle; the tireless exertions and passionate concern of dedicated individuals.”

Silvera used this quote to highlight the work that SoCal TNBC does on a continual basis to make change through class struggle. He confronted Trump’s attacks on the working class and stressed the importance of all workers remaining united as the working class rather than hiding behind the safety of “middle class” labels.

The Local 808 leader stated that it is the union’s duty to organize and move its workers to understand that Trump is not for them, that Trump is explicitly anti-worker. He explained that the union should be used as a vehicle for advancement, not complacency, and that taking a risk to fight for rights earned by the unions is both necessary and needed.

He emphasized that union business agents must not accept tokens and trinkets for their silence and compliance, but rather be true representatives in uplifting Black communities all over the world, most especially in times of need. He spoke of global Black communities suffering because of U.S. imperialism, including Haiti, Nigeria and the Sudan — all needing solidarity from the TNBC.

Silvera highlighted the importance of recognizing the transformation of the U.S. from an industrial country to a service economy, and the need for service workers to demand and earn the same wages, securities and benefits as other unionized workers.

He called on the Teamsters as a whole to be responsible as leaders in the labor movement to uplift the working class. He defined the role of the TNBS as increasing the participation of Blacks in the working-class struggle in order to manifest true equality and dignity for all workers.

Silvera was accompanied by his longtime friends Clarence Thomas and Dolores Lemon Thomas. Thomas, a union organizer and retired member of International Longshore and Warehouse Union Local 10 from the Bay Area, played a key role in the historic closings of San Francisco ports to protest South Africa’s apartheid regime. Chris Silvera and Clarence Thomas were leading organizers of the landmark Million Worker March in 2004.