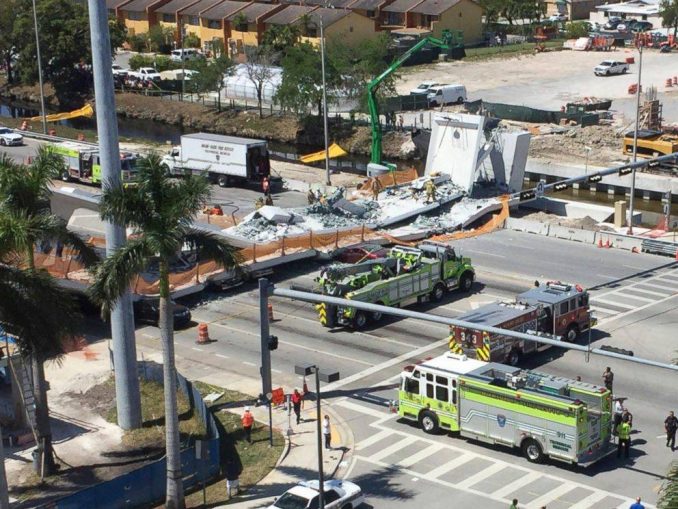 A pedestrian bridge under construction over a seven-lane highway leading to Florida International University collapsed March 15, killing six people and injuring 10 in a mass of crushed cars, steel and concrete.

The 950-ton span was being built under a new construction protocol called “Accelerated Bridge Construction.” Its intent is to speed up construction and reduce traffic interruptions by building bridges off-site, in this case by the side of the road running past FIU, and then rotating them into place. This last step occurred March 10 during a six-hour period.

According to the university’s website, the bridge was designed to weather a Category-5 hurricane and last 100 years.

Atorod Azizinamini, chair of FIU’s ­Civil and Environmental Engineering Department and director of its Accelerated Bridge Construction University Transportation Center, stated: “This project is an outstanding example of the ABC ­method. Building the major element of the bridge — its main span superstructure — outside of the traveled way and away from busy Eighth Street is a milestone.”

The Federal Highway Administration lauds ABC technology as a “timely innovation,” especially when “approximately 25 percent of our nation’s aging bridges need repair or replacement and our highways are already congested without the added strain of road closures.” (fhwa.dot.gov/bridge)

Given the pressing need to replace hundreds of bridges and other decaying infrastructure in the U.S., there is tremendous interest in ABC, which has been widely used in Europe. Not only does it save time and avoid rerouting traffic during construction, but it saves big bucks.

Like anything else, however, ABC bridge construction methods must be used carefully and to precise specifications, with consideration of safety put ahead of convenience and saving money.

The reasons for the collapse of the FIU bridge are probably going to take a long time to discover and likely involve multiple factors. Both Architecture News and the NBC affiliate in Miami have pointed out three serious errors known so far.

A meeting held by the engineering firm Figg Bridge Engineers with representatives from FIU and the Florida Department of Transportation accepted Figg’s assertion that cracks appearing in the bridge “did not compromise the structural integrity of the bridge,” even though Figg did not explain why the cracks appeared.

Work on tightening some internal cables in the bridge that had loosened, as well as a “dangerous” stress test, went on while traffic was allowed to flow under the bridge.

No temporary support structures were in place under the bridge, which would have helped prevent an abrupt failure like the one that occurred. But they would have cost money and interfered with traffic while being installed and removed.

“Innovations take a design firm into an area where they don’t have applicable experience, and then we have another unexpected failure on our hands,” said ­Robert Bea, an engineering and construction management professor at the University of California, Berkeley, after reviewing the bridge’s design and photos of the collapse. (canada.constructconnect.com, March 16)

In this era of deregulation, cutbacks and austerity, saving time and money might seem a worthwhile objective, but not when it comes to the safety and lives of pedestrians, drivers and workers.