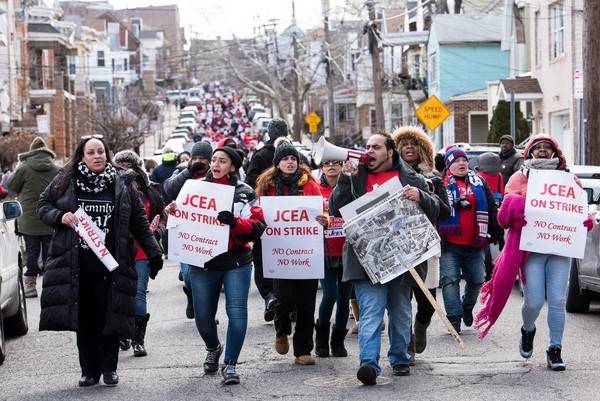 Jersey City, N.J. — Teachers here walked out on strike on Friday, March 16. Represented by the Jersey City Education Association, they refused to back down in the face of a court injunction that ordered them back to work. New Jersey state laws prohibit public sector unions from striking.

The teachers’ assertion of their right to strike has now won a big labor victory, according to union leaders. Late on Sunday, March 18, the JCEA announced that an agreement had been confirmed with the Board of Education, pending approval by a teachers’ vote to accept or reject the contract.

The union had spent the weekend making plans for picket lines in front of all 38 public schools, K through 12. Jersey City is the second-largest city in New Jersey by population (247,597) and is rich in racial, ethnic and language diversity. The overwhelming majority of the city is Black, Latinx, Asian and Arab. Its 30,000 public school students speak more than 40 different first languages.

A visit to the packed and bustling union hall confirmed an intense level of mobilization. Many other unions and community groups came to offer support and solidarity. Parents were arriving with bags of snacks and supplies for the strikers.

Friday’s picket lines in front of each school were greeted by drivers honking support. Many high school students joined their teachers on the lines. School nurses, paraprofessionals, secretaries, child-study teams, guidance counselors and noncertified administrators whose contracts are up next for negotiation also joined the pickets.

From each school there was a Friday morning march to the Board of Education. There, while drums pounded, the speaker system blasted the Twisted Sister song, “We’re Not Gonna Take It!” The teachers’ strike decision had followed a raucous school board meeting, lasting past midnight Thursday, which ended without the board satisfying the teachers’ demands.

Faced with the strike on Friday, mass demonstrations, marches and overwhelming community support, the board was forced to concede to a contract that met the teachers’ demands, including agreement on salaries and health care costs.

The burning issue across New Jersey and for many teachers in the U.S. is skyrocketing employee health care costs. Local teachers spoke of premiums as high as $1,400 a month, totaling $17,000 a year.

Due to health care costs increasing 15 percent in recent years, teachers were faced with take-home pay in 2017 totaling less than what teachers received 10 years ago.

The 4,000 teachers had worked without a contract since Sept. 1 as negotiations with the Board of Education ground on. The teachers last struck in 1998 when they also defied a court injunction and fines to stay out for five days. With unity and determination, they won an important victory 20 years ago. (tinyurl.com/yd2k3t9b)

Tax abatements for the rich

Jersey City’s rate of poverty at 25 percent is now double the state average. The city is sharply divided between expensive and hip waterfront and downtown development and heavily taxed immigrant and working-class neighborhoods facing gentrification.

The city’s claim of inability to meet the teachers’ demands due to lack of funds and a $65 million deficit was challenged by the teachers’ union. Jersey City offers tax abatements of 20 and 30 years to big real estate developers.

At a rally the day before the strike, JCEA president Ron Greco condemned Mayor Steven Fulop for his silence on teacher demands: “Nobody but developers get in to see him. Then he gives them abatements that do not pay any school taxes.” Fulop campaigned recently for re-election as a liberal, pro-union Democrat.

The strike’s success will have statewide implications, as unions across New Jersey struggle to cap employee health care costs.

The Jersey City strike was connected by teachers, many supporters and local media to growing national militancy by teachers and school workers, given the recent successful nine-day education workers’ statewide strike in West Virginia.

The Puerto Rican Teachers Federation, EDUCAMOS and allied teachers’ organizations in the Broad Front in Defense of Public Education (FADEP) have called a national teachers’ work stoppage March 19 in response to neocolonial austerity imposed by U.S. and Spanish capitalists. Kentucky teachers are fighting to keep their pension plan from being gutted by austerity “reform.” Arizona teachers have begun highly visible actions sporting “Red for Ed” T-shirts. Oklahoma teachers are set to strike April 2 in a state where oil and gas companies pay no property taxes on land holding their reserves.