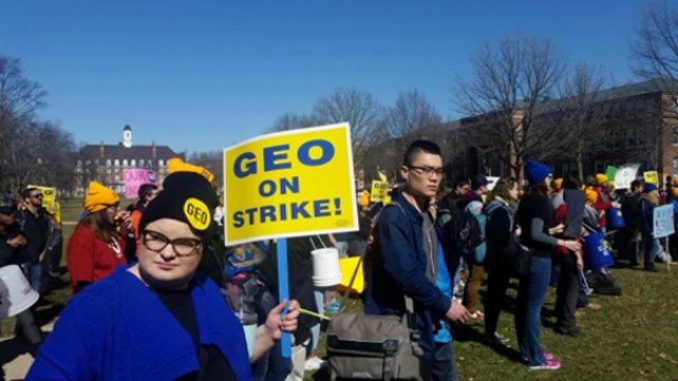 Graduate student workers at the University of Illinois Urbana-Champaign campus rallied Feb. 26 as part of a strike by members of the graduate worker’s union, the Graduate Employee Organization (GEO).

The strike began Feb. 26 after the administration refused to guarantee tuition waivers for workers.

Tuition waivers were initially secured in the first contract bargained by the Graduate Employees’ Organization in 2009. Without them, many graduate workers would have to pay twice their stipends to cover the cost of enrollment.

Ten days of eight-hour picket lines forced the cancellation and relocation of dozens of classes. GEO received solidarity letters and support photos from workers and their local unions around the U.S. and internationally.

Members and supporters turned out in the hundreds to rallies on the campus quad, calling on the university administration to return to the bargaining table. Strike activities culminated in a 24-hour occupation of multiple buildings on campus.

Faced with a choice between returning to the bargaining table and forcibly ejecting graduate workers from their own campus buildings, university officials decided to reconvene with the GEO’s bargaining committee on March 9. The occupation was suspended during negotiations.

The five-year contract was approved with 98 percent of the vote.  It provides substantial gains for graduate workers. Tuition waivers are once again secured, as are pay increases. Health insurance coverage was expanded; ethnicity, immigration status, gender expression and arrest records were added as protected information; and the ability to grieve microaggressions as discrimination was introduced.

The UIUC GEO’s Twitter and Facebook pages celebrated the victory, while maintaining a measured focus on what lies ahead for the organization, the importance of enforcing and improving their contract, and how graduate workers can win through unionizing their campuses.

A tweet from March 9 reads: “Did we get everything we want? No. Are there areas of our contract we need to strengthen? Yes. Will we continue to organize our workplace, empower members, and keep the fight for #EducationForAll alive? You better believe it. La lucha continúa.”