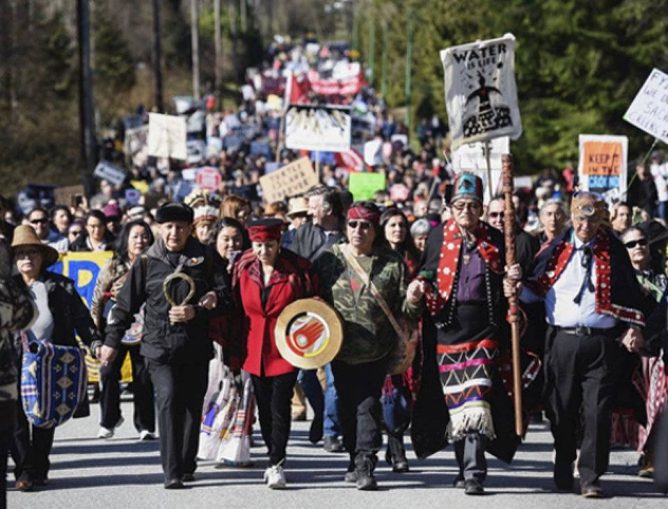 Over 10,000 people marched on March 11 in the city of Burnaby, near Vancouver, B.C., Canada, opposing the $7.3 billion Kinder Morgan Trans Mountain pipeline. First Nations, whose people would be most directly affected by this massive pipeline carrying bitumen oil from Alberta tar sands, led the rally. This is the largest fightback since the First Nations movement fought the Dakota Access Pipeline at Standing Rock, N.D.

The inlet at Burnaby is where the 700-mile pipeline will come to the shore and the oil will be loaded on tankers. Rueben George and other Native activists and elders from across Canada spoke at the rally. George represents the local Tsleil-Waututh First Nation, which is directly in the path of the pipeline.

Indigenous women have launched the Tiny House Warrior movement, with plans to build houses in the path of the pipeline. The rally was held in a clearing next to where the finished pipeline would come through, which is on unceded First Nations land.

Throughout the day, volunteers worked on an 18-by-21-foot “Watch House” directly in the pipeline’s path, only a short distance from the rally.

The Kinder Morgan pipeline will increase an old, smaller pipeline’s capacity from 300,000 barrels a day to 890,000. It will increase traffic in the Salish Sea from five to 34 tankers a month. It is inevitable that an oil tanker accident will occur, and overwhelm and destroy the ecology of the Salish Sea. That body of water includes the straits of British Columbia, between Vancouver city and Vancouver Island, and the Puget Sound in Washington state.

The Justin Trudeau federal government is promoting the pipeline, but the provincial and local governments oppose it.

The Protect the Inlet campaign includes First Nations on both sides of the Canadian-U.S. border, along with many community and environmental groups, with thousands of people pledged to commit civil disobedience to stop the pipeline.