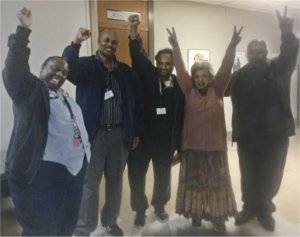 Custodians pleased with outcome of strike.

Durham, N.C. — Custodians in Durham Public Schools won $1.1 million in wages and benefit increases on March 8 after fighting for a few months. Workers had been complaining about going years without any pay increase. Many have only part-time jobs with no benefits.

After powerful testimony directly from workers, the DPS Board of Education voted to “in-source” the custodians back to direct DPS control and move away from a private contractor to clean the schools.

The deal covers all the district’s 294 full-time and part-time custodians who work for either Service Solutions or their subcontractor, Premiere.

The new decision will bring full-time workers up to potentially $16 per hour; move from a 401K retirement plan to a Defined Benefit Pension plan; and decrease monthly health care costs from $121 to $25 per month for individuals.

Part-time workers will see the largest wage increases. They will gain at least $3.22 per hour and paid sick days.

DPS contracted out the custodial services to Service Solutions 13 years ago in an effort to save the district money on the backs of the workers. This type of privatization is rampant across the U.S. in this period of dead-end capitalism and never-ending budget cuts.

An important aspect of this struggle was that it was rank-and-file Black workers, like Deborrah Bailey and many others, who led this fight and carried it forward to the finish. They had been organizing for months, including participating in direct meetings with DPS decision makers.

Bailey said of their organizing strategy: “We won because we had the gumption to go to the decision makers. We knew what we wanted – to be in-house. We can’t send in lawyers to represent us. It was the workers that were the worker bees that made this change possible. The beauty of it was that we had over 80 workers involved and speaking up, and we corroborated each other.”

The workers organized a meeting where over 65 custodians showed up to speak to senior DPS administrators about the need to in-source the jobs. These same workers also showed up at the Durham Workers Assembly on March 1 to speak about their conditions and appeal for help. The DWA helped mobilize community and labor support at the March 8 school board meeting.

The Durham Association of Educators, an affiliate of the National Education Association, played a very helpful role in communicating the workers’ demands directly to school board members and ensuring workers were on an official committee to resolve the concerns.

Just two years ago in late 2016, Service Solutions was contracting out the cleaning work to a subcontractor, Integrity Facilities Management, which declared bankruptcy and didn’t pay its employees for a couple weeks of work during the year-end holiday season. Undocumented Latinx workers who were not paid were impacted the most. Those workers organized some protests and finally got back pay.

Now, the same company is pitting these undocumented Latinx workers against the Black workers. The bosses have convinced the undocumented Latinx workers that the county won’t hire them directly. So the bosses coerced these workers to speak out in favor of the private company at the school board meeting, while a list of entirely Black workers challenged the company in favor of in-sourcing.

This struggle highlighted how the bosses use racism to attempt to divide and conquer the workers. But in the end, the workers overcame these racist attacks!

There have been three public assemblies since the municipal elections last fall where workers from many different industries, including fast food, construction, domestic service, city and university employees, and many others, have raised demands on their bosses. They have crafted a program of action, called a “Workers Bill of Rights,” to help establish standards for workplace safety, wages, benefits and union rights.

The assembly is also demanding that the city create a workers’ commission, which will be composed of workers from major industries and employers across Durham, and give it resources to enforce fair working conditions and wages.

The assemblies have been important launching places to gather community and labor support behind labor struggles and to mobilize actions to shame employers.

The Durham Workers Assembly is hosting public worker speakouts and organizing meetings the first Thursday of every month, and will be joining with the Southern Workers Assembly to host a workers’ school in the summer.