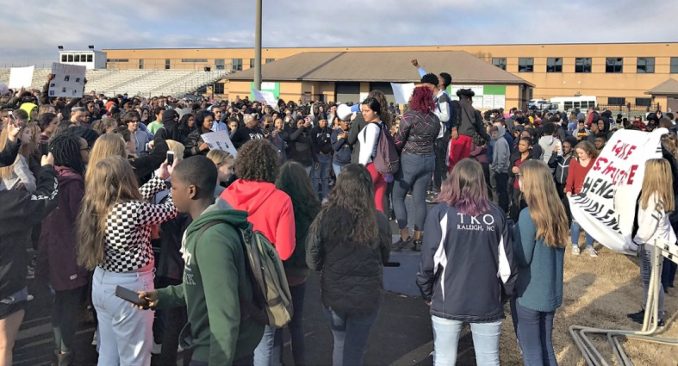 Raleigh, N.C. — A million students, from all ages and backgrounds, marched out of schools on March 14 in solidarity with the 17 victims of the mass school shooting in Parkland, Fla., on Feb. 15. They chanted: “When our students are under attack, what do we do? Stand up, fight back!”

The student-led walkout was called by youth activists in Parkland, who requested solidarity actions from students and allies all across the U.S., to demand an end to violence in schools. The Parkland activists’ request was simple: That everyone walk out of classes at 10 a.m., be outside for 17 minutes to honor and uplift the 17 lives lost, and demand that all schools become a safe space for all students and teachers.

This writer was an active organizer, with a small group of other students, in forming a walkout at our school, Leesville Road High School in Raleigh, N.C. During second period on March 14, we gathered in the main lobby of our school with a banner that read, “Make Our Schools Safe #endtheviolence,” and a bullhorn.

Soon hundreds of students — Black, white, Latinx, Muslim — along with teachers, filled the halls, ready to march out of the school. Many were wearing orange, used to signify opposition to gun violence since 2013, after the death of Hadiya Pendleton, a 15-year-old African-American student in Chicago.

Students held signs that read, “Stop the violence” and “No more silence.”  After a march to the football field, students of color leading the way, a brief program began, with two seniors taking the bullhorn and making space for participants’ thoughts as students and as women of color.

One 18-year-old student, Alia Hassan, said: “We stand in solidarity with Stoneman Douglas, Sandy Hook, Virginia Tech, University of Texas, Columbine, Red Lake. … The list goes on. This is the eleventh week of 2018, and we are 14 school shootings in. We are making the change, when our lawmakers have been oblivious to our safety.” She then uplifted the names of the 17 victims from the Parkland shooting, 14 of them students and three teachers, and called for a moment of silence.

Another student said she and her friends participated in the walkout because “it’s our duty to make change in our society today.”

To some students, a safe school means stricter gun control laws or outlawing the AR-15, a weapon most commonly used during mass school shootings.

But to most students, safe schools mean more than gun control.

Safe schools means arming our teachers, not with guns, but with better pay and more resources for the classroom. Safe schools means kicking police “resource officers” out of the schools and ending the harassment and criminalization of Black and Brown students. Safe schools means having all-gender restrooms for queer, trans and gender nonconforming students; and destroying the racist, sexist dress code that most schools have. Safe schools mean having more counselors and dismantling the school-to-prison pipeline.

The fight for safety in schools does not end with the March 14 walkout. Students are demanding that lawmakers and adult allies start listening and taking action to make schools safe.

On March 24, people from all over the country will be traveling to Washington, D.C., to participate in the “March for Our Lives” rally against gun violence. Organizers are asking for solidarity marches in different parts of the world. They are dedicating this moment to student-led activism, and will take to the streets to demand that safety becomes a priority.