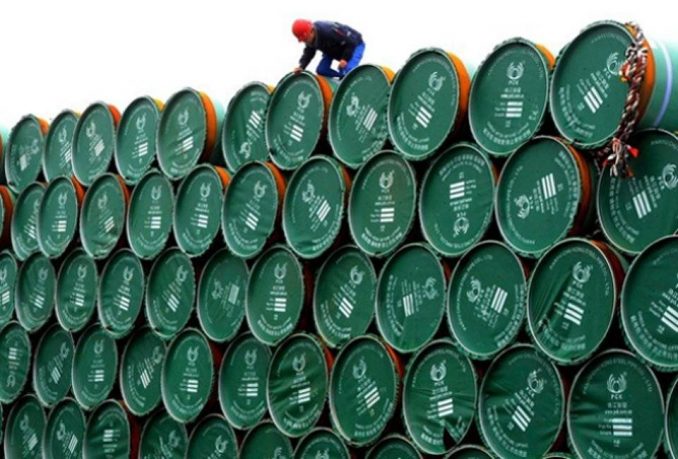 Buckets of steel pipes waiting to be loaded onto a cargo ship.

It would have been appropriate to have his buddy and “adviser,” tycoon Carl Icahn, standing behind him. Icahn raked in a cool $30 million by selling some of his stock in steel-hungry Manitowoc, a construction crane maker, a week before Trump’s tariffs were announced. The stock’s new owners might lose from the higher steel costs to Manitowoc. It’s doubtful that the Trump regime will investigate this as a clear case of insider trading.

But demagogue that he is, Trump knew that having a fellow billionaire present would have signaled that his tariffs are aimed at helping only the owners. U.S. workers have lost more than 60,000 steel jobs since 2010 from changes in technology that increase productivity, not from competition with foreign workers.

So instead of Icahn, Trump lined up a dozen or so steelworkers, decked out in jeans and hard hats, to witness the signing. Both AFL-CIO President Richard Trumka and United Steelworkers President Leo Gerard applauded Trump’s move. Gerard said, “Trump was able to see the steelworkers’ agenda.”

The two union leaders both attacked China, accusing that country of “overproducing” steel and aluminum. China ranks only ninth in steel imports to the U.S. and fourth in aluminum.

Most of Wall Street opposes Trump’s new tariffs. Many of their economists predict that far more other jobs will be lost than steel jobs saved. Of course, these wizards of high finance don’t care about workers any more than Trump does, but they are concerned that Trump’s tariffs may disrupt their carefully crafted global network designed to force subsidiaries to pay the lowest wages to their workers to win supplier contracts. If Trump’s measures touch off a trade war, that might lower their profit margins.

Thus, the Council on Foreign Relations estimates that 40,000 auto jobs will be lost due to the price hike for steel. The Associated General Contractors of America states that 30,000 construction jobs could be lost because of Trump’s tariffs. The Trade Partnership think tank estimates that for the 30,000 jobs that Trump’s tariffs might save, 150,000 other jobs will be lost. (qz.com, Mar. 5)

How should the working class view Trump’s tariffs? Should we line up behind the anti-worker, pro-corporate bigot-in-chief to “protect” the steel industry?

In 2013, U.S. Steel CEO Mario Longhi began a cost-cutting, “streamlining” program called the “Carnegie Way,” named after Andrew Carnegie, the founder of the steel company. The billionaire Carnegie, along with his goon Henry Clay Frick, locked out unionized workers in 1892 at the Homestead factory in Pennsylvania. Frick brought in dozens of mercenary Pinkerton agents, who shot down at least 16 workers as they threw out the union from the plant then.

Workers at U.S. Steel’s Gary Works plant have discovered that the company’s “Carnegie Way” plan has lived down to its name. Frank Bokodi, who has worked at Gary Works for three years, said that while USS “‘reported losses totaling hundreds of millions of dollars translating into zero profit-sharing and a horrible union contract with no raises in pay and major concessions by the USW [Steelworkers union] for its members, … Longhi has collected tens of millions of dollars in salaries and bonuses, yes bonuses for hundreds of millions in losses.’” (Northwest Indiana Times, May 10)

Should workers “protect” the bosses at Allegheny Technologies, who locked out 2,200 USW members in 2014? For seven months the company waged war on its workers with security guards and scabs, trying to force a concession-filled contract. But the workers won that long struggle.

The largest steel producer in the U.S. is the Nucor Corporation, with more than 200 facilities and more than $16 billion. There is no union at Nucor, and all of its plants are in “right to work” states, which means anti-union states where the workers have the right to work for less pay. In the blast furnace steel factories, it takes some 10 human-hours to produce a ton of steel. At the electric-furnace Nucor factory, that same ton of steel can be made from recycled materials in 0.4 human-hours, that is, one worker produces the same there as 25 do in a blast-furnace plant. Most of the Nucor plants’ floors are packed with automated machines.

In a socialist society, automation and trade should be good for workers, with each advance reducing the backbreaking labor necessary to produce the commodities that the people need. But under capitalism and imperialism, the bosses use these as weapons to drive down our wages. For the last 40 years, they have waged a relentless campaign to destroy our unions.

After adjusting for inflation, wages are only 10 percent higher in 2017 than they were in 1973, with annual real wage growth just below 0.2 percent. (brookings.edu) Meanwhile, productivity grew more than 70 percent. (epi.org) Union membership for “private sector” workers is 6.5 per cent, the lowest rate since 1932.

Union leadership can and should do everything they can to save good-paying jobs and benefits. But supporting Boss Trump in blaming U.S. workers’ plight on foreign workers, while calling for tariff “protection” of the steel industry, won’t save workers’ jobs.

What will? The same things that have always worked for working people: solidarity with workers and oppressed here and abroad and struggle against the bosses.