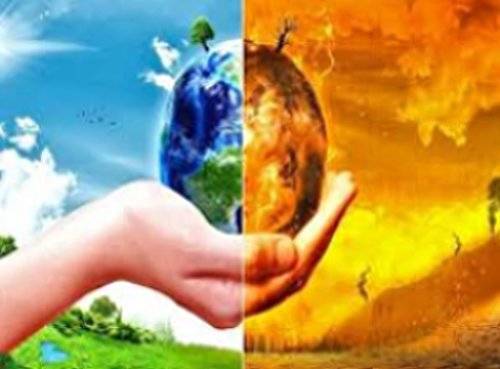 Workers and their allies throughout the world argue that it is possible to make climate, meaning the patterns of daily weather events, less violent, less dangerous, more comfortable, more human. Their bosses argue that come what may — come high heat, high water, frigid cold — workers have to get to work to make money for them and, in addition, bear most of the costs of violent weather.

That’s the nub of the argument over climate change: Making profits by ignoring risks versus making a livable environment for human life.

Global warming is one of the most significant factors in climate change. It is a major factor in events like wildfires and droughts.

But Jennifer Francis, a research professor at Rutgers University, is one of the scientists who also feel that “rapid warming and wholesale melting of the Arctic may be playing a role in causing persistent cold spells.” (www.skepticalscience.com)

The winter of 2017-18 has been marked by violent and rapid changes in the weather. According to Francis, citing four of the last five years, December and the first few weeks of 2018 in the central and eastern parts of Canada and the United States were very cold. States like Louisiana, Texas and Florida, usually snow-free, received significant amounts of snow, along with record low temperatures.

Though February in the U.S. Northeast was one of the warmest Februarys on record, most of Europe, from Madrid to Moscow, faced weeks of brutal cold, with temperatures unusually well below freezing. Snow and freezing rain made road and rail travel treacherous. Thousands of cars and trucks were trapped on highways in southern France, and snow actually coated Mediterranean beaches.

In western Europe, prosperous and highly developed, the cold was mainly dangerous for the homeless, often immigrants and refugees, and the poor, whose shelters don’t have enough heat or insulation. Many workers, especially in Great Britain, demanded to be paid for the days they couldn’t get to work, with mixed success.

In far less prosperous eastern Europe, the situation was graver. Polish authorities reported at least 58 deaths due to hypothermia in February. In Bosnia, 11,000 villagers were cut off by heavy snow and avalanches, with helicopters bringing in food and fuel. Romania, Ukraine, Macedonia and Albania all reported heavy snowfall and far-below-freezing conditions, making it hard for workers to get to jobs and threatening the poor, the homeless, the elders and the very young.

For a couple of days at the end of February, Cape Morris Jesup, the weather station at the northern tip of Greenland, was warmer than Zurich, Paris or Rome. Cape Morris Jesup is about 450 miles from the North Pole. The sun sets there in October and doesn’t rise again until the end of March.

Temperatures in the Arctic in the last week of February soared to about 35 degrees Fahrenheit, 50 degrees higher than normal. Similar temperature anomalies were noted throughout the Arctic.

Francis explained that arctic warming significantly reduces the ice cover of the Arctic Ocean. That reduces the difference in atmospheric pressure between the Arctic and mid-latitudes, weakening the jet stream, which normally keeps the most frigid cold in the Arctic, and causing lengthy cold snaps in North America and Europe.

“This is what we’ve been talking about; it couldn’t be more classic,” Francis told the Associated Press March 10. “If you look at the whole picture, the whole jet stream around the Northern Hemisphere, it’s had these very large excursions north and south and that’s led to all of the wacky weather.”

“The underlying disease that’s causing this is getting worse,” Francis said, referring to heat-trapping gases from the burning of coal, oil and gas. “These are just the symptoms.”

Trump has rolled back some regulations set up to combat climate change in the U.S. He questions the reality of climate change and promotes the fossil fuel industries, particularly coal. On June 1, 2017, he even withdrew the U.S. from the nonbinding and not really effective 2015 Paris Accords on climate change.

The major European countries have not renounced the Paris Agreement, but they have not taken any significant steps to combat global warming. They don’t want to put limits on what their companies can do to make profits.

China, the world’s second-largest economy, has installed about a third of the world’s current capacity to produce wind power, according to the Global Wind Energy Council. China already produces over half of the world’s energy by solar power and intends to achieve the goals set for it under the Paris Accords years ahead of schedule.

Tarea Vida is designed to prepare Cuba for environmental challenges for the next hundred years.

“It’s impressive,” marine scientist David Guggenheim, president of Ocean Doctor, told the magazine Science. (Jan. 10) “Cuba is an unusual country in that they actually respect their scientists, and their climate change policy is science driven.” The Cuban plan stresses resilience and adaptation, rather than massive and costly infrastructure projects.