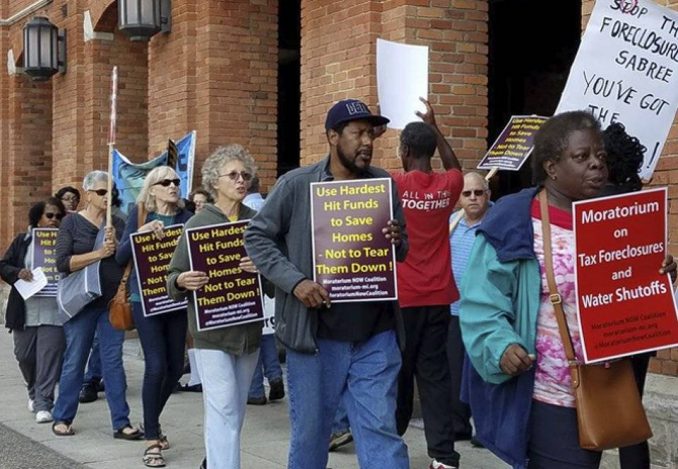 March 24 will be an important date for the Moratorium NOW! Coalition and more than 50 other organizations and individuals who have endorsed the National Conference to Defeat Austerity in Detroit. The gathering is being held at the historic St. Matthew’s-St. Joseph’s Church.

This event has its origins in several developments in the city. Hundreds of thousands of residents have seen their standard of living drop precipitously amid massive layoffs in the retail and service sectors, along with the ongoing property tax foreclosure epidemic and rising rents.

The corporate media narrative promotes the city as making significant progress after emerging from what was in actuality an illegal municipal bankruptcy during 2013-14, while simultaneously overlooking the plight of the majority African-American, working-class population, many of whom are mired in poverty.

The NCDA concept arose after the Moratorium NOW! Coalition mobilized people for the World Conference of Mayors meeting held last Oct. 23-27 at the MGM Grand Casino Hotel. The billionaire ruling class, headed by Quicken Loans and Cleveland Cavaliers owner Dan Gilbert and the Illitch Companies, sought to use the World Conference of Mayors to spread blatant misrepresentation of the social and economic situation in Detroit.

A citywide town hall meeting titled “Real Detroiters Speak Out!” was convened Oct. 27 after a week of activities, including an intervention at the World Conference of Mayors itself. At subsequent meetings in November and December, organizers decided to build a broader event that would thoroughly analyze the present crisis and develop a programmatic response to the domestic and U.S. foreign policies devastating cities and whole countries around the world.

Why the people struggle

The recently enacted first phase of federal tax legislation will result in enormous cuts to social programs and environmental safeguards under the guise of providing incentives for corporations and allegedly workers and consumers.

However, subsidizing financial institutions through a formal 14 percent corporate tax reduction means that the masses of working and poor people will be denied desperately needed housing, health care and food assistance while the Pentagon budget continues to grow.

Relating to Detroit, Moratorium NOW! has stressed over the last three years that more than $700 million has been redirected from the federal Hardest Hit Fund, initially designed to assist homeowners negatively impacted by foreclosures and evictions, to questionable projects related to so-called “blight removal.” A significant portion of these funds has been turned over to the Detroit Land Bank Authority, described as a quasi-public entity, although it is run in the interests of the banks, corporations and real estate investors. The DLBA has been under federal investigation over allegations of bid-rigging and deliberate cost overruns.

Business-friendly Mayor Mike Duggan has opposed the use of federal funds earmarked for homeowners to stabilize neighborhoods. Working on behalf of the billionaires based downtown, both Duggan and the compliant City Council have repeatedly voted in favor of the transfer of public assets such as taxes, land and infrastructure to an array of prestige projects which provide no tangible benefits to the majority of people.

From Detroit to Puerto Rico

Highlighting the NCDA program will be activists from Puerto Rico, the devastated island nation which has long been a colonial outpost for U.S. imperialism. Ricardo Santos Ramos, the former president of the Electrical Industry and Irrigation Workers Union (UTIER), will attend and address the conference.

Like Detroit, Puerto Rico was placed into an unprecedented bankruptcy, which claimed that the people owe $72 billion to the banks. Compounding this financial crisis, hurricanes Irma and Maria caused extensive physical damage, destroying homes, electrical grids and production centers.

The delay in reconnecting power, rebuilding homes and facilitating the general restoration of normalcy for the people is clearly related to the dominance of the U.S government, which has stifled the economic growth and development of Puerto Rico in order to further facilitate its exploitation of the people.

Another prominent speaker will be the Rev. Edward Pinkney, a former political prisoner who was targeted, framed, prosecuted and imprisoned on two occasions since 2006 for opposing the imposition of so-called emergency management in Benton Harbor, Mich.

Yvonne Jones, co-founder of the Detroit Active and Retired Employees Association, will discuss the character of austerity in the city. Tens of thousands of municipal retirees were subjected to cuts in their pensions and annuities during the bankruptcy in 2014. Guaranteed lifetime health care coverage was completely eliminated.

Other invited speakers include Dior Gabrielle, organizer for the event; Dante Strobino with the Southern Workers Assembly, also bringing news of the North Carolina Public Service Workers Union, United Electrical Workers Local 150; representatives of the Southern Workers Assembly; Maurice B.P. Drew of the Refund America Project, ACRES; Yexenia Vanegas, Detroit organizer for the Poor People’s Campaign; Elena Herrada of the Detroit School Board in exile; Jonathan Roberts of the Restaurant Opportunities Center of Michigan; Julia Kassem of  the U.S. Palestine Community Network in Detroit; Jesus Rodriguez Epinosa, former Counsel General in Chicago for the Bolivarian Republic of Venezuela; Jerry King of the A. Phillip Randolph Institute in Detroit; Kristy O’Connor of the Library Defense Network; S. Baxter Jones, a disabilities rights advocate and former member of the Homrich 9; and the Rev. W.J. Rideout, an organizer for the Fight for $15 Campaign and Defenders for Truth and Justice.

There will be workshops on housing, water shutoffs, the Poor People’s Campaign, education and public transit. A national town hall panel will give voice to people across the country, while another session on the international struggle against austerity will illustrate the global aspects of the crisis.

The conference will close with a community meal and cultural program in the evening. Organizers will live-stream portions of the proceedings to reach broader audiences.

This event will be both educational as well as activist. Several resolutions will be introduced calling for actions around pressing issues in Detroit and nationwide. Over the next several months various struggles against poverty and racism and for labor rights and environmental justice will intensify.

Conference organizers will seek support for demonstrations to demand a moratorium on 36,000 scheduled property tax foreclosures in Wayne County. The delegates will be asked to support anti-war demonstrations slated for April 14-15 in several cities.

Organizers hope the NCDA will serve as a partial springboard for broader participation in Michigan and around the country for the National Poor People’s Campaign. Plans will also be discussed for unified actions on May 1, International Workers’ Day. Additional resolutions and action proposals will be accepted.

To attend or support this important conference, visit its Facebook page; registration information and other resources can be found at tinyurl.com/ycx68v2s. Although conference registration is free, donations for printed materials and food will be accepted.