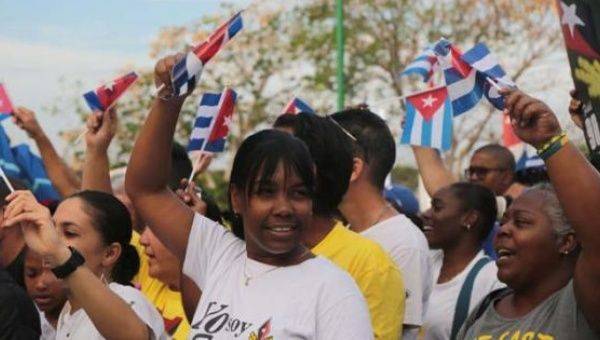 This is a slightly edited version of a talk given at a Feb. 3 forum, “Women and the Struggle for Socialism,” hosted by Workers World Party in New York City.

Good afternoon, comrades.  I’m not going to limit my remarks to women in Cuba but will include also women in the socialist camp.

The lives of women dramatically changed with the overturning of the Soviet Union and socialism in Eastern Europe.  The facts demonstrate that the lives of women there were incomparably better under socialism than under capitalism.

The New York Times has cited research that women in socialist Eastern Europe had so many more rights and privileges than women under capitalism, that women did not just enjoy generous maternity leave, guaranteed free child care, state investments in education and training, but women under socialism also enjoyed more sexual pleasure! (Aug. 12, 2017)

But that makes sense doesn’t it? Women’s lives are so difficult under capitalism that when you get home, not only are you tired from work — if you’re lucky enough to have a job — but the weight and worry of life under capitalism makes pleasure of any kind a distant dream. So it makes sense that women enjoyed more sexual pleasure under socialism.

When the material basis of society benefits the workers and the oppressed and not the corporations, when society is planned and organized for the masses and not for profit, life is qualitatively better.

But with the collapse of the socialist camp came the collapse in the quality of women’s lives. One study notes “a striking image of the changes after the fall of the Berlin Wall was that of women lining the highways offering sex for sale.” Women in Eastern Europe began to be trafficked in record numbers directly because of the collapse of socialism. (Kligman and Limoncelli, ”Trafficking Women,” Social Politics 12.1)

From bounty of rights to human bondage

This is the difference for women under capitalism, instead of under socialism. And for trans women and women of color, the horrors multiply.

Imagine the lives of women in Cuba if their revolution were to be overturned. Fortunately, we don’t have to imagine this because we have every confidence in the leadership and the people of the Cuba. They will not go back to capitalism. They will fight to the last breath to defend socialism.

Here in New York we will soon have the chance to hear directly from a Cuban woman deeply involved in the building of socialism. Griselda Aguilera was seven years old when she joined the literacy campaign in the early days of the revolution. In less than one year, as people were sent out to teach and give the masses the right to read and write, Cuba raised its literacy rate to 96 percent. This, of course, greatly benefited women.

And the Revolution founded the Federation of Cuban Women (Federación de Mujeres Cubanas). The FMC helped win paid maternity leave for six whole months, with another six months of unpaid leave. That was improved in 2003, when paid maternity leave was extended to one year for both mothers and fathers. The FMC shaped Cuba’s Family Code, which made it the legal obligation of men to share in housework and child rearing. Imagine that!

Perhaps what I love most about Cuban women is how, because they have grown up under socialism, they have a beautiful, dialectical-materialist way of explaining their world. When they describe actual life at home, they say: “Because they [men] do not have a wife at home to make dinner and take care of the house,” life is different than what the law dictates. “Women work,” Cuban women say, “but men have not learned to wash and cook. Men still don’t understand what equity means.”

A Cuban woman told us once — in heterosexual terms, but important nonetheless: “The woman a Cuban man wants no longer exists, and the man that a Cuban woman wants is yet to be born.” Isn’t that beautiful dialectics?

How important these points are when you are in the struggle! Because if we don’t learn how to deal with contradictions, how to apply the struggle with nuances and delicacies, how frustrating and demoralizing it can be.

And when we are frustrated and demoralized, we cannot go forward.

This is how I see the struggle against sexual assault and misogyny in the U.S. right now. A helpful struggle, going forward, but far from what we need.

For us, whether we speak of the women’s movement or the labor or anti-war movement, or even the Party: Neither the movement nor the party we want is yet to be formed. Not because we don’t fight or organize, but because of material conditions, because of the actual reality we live in.

Genuine socialists and communists and revolutionaries deal with the here- and-now, and also push toward what we aspire to be, passionately but also dispassionately, objectively and as wisely as we can.