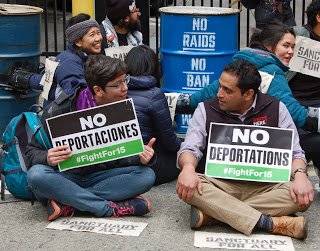 Hundreds of mostly young people shut down the San Francisco headquarters of the Immigration and Customs Enforcement department gates and blocked the intersection of Sansome and Washington streets on Feb. 28 to protest the gestapo-like roundup of alleged undocumented immigrants in the Bay Area.

Activist youths, labor union members, church-affiliated people and anyone opposing the ICE attacks that break up immigrant families and disrupt the lives of millions joined the action. They joined arms — sometimes using lengthy extensions — and chanted against ICE while blocking ICE entrances and traffic in downtown San Francisco.

One group of marchers arrived following a large banner that read, “Crush ICE.” Other protesters painted an enormous sign on the street with the message that the Bay Area was protesting ICE and demanding to “Keep families together.”

ICE’s assaults on various communities in the Bay Area from San Jose to Oakland to San Francisco had led to the arrests of 150 people. According to ICE spokespeople, another 864 people had been targeted but escaped. For this slipup, ICE officials attempted to blame local elected politicians like Oakland Mayor Libby Schaaf, who warned people of the upcoming raids. Many of the local elected officials in California oppose the blatant repression of the raids and say they won’t cooperate with ICE.

According to Indybay.org on March 1, “Some protesters — yelling, ‘Shut ICE down!’ — locked themselves together in human chains to block traffic well into the afternoon.” Others blocked ICE gates to prevent them from bringing more arrestees in.

Protester Trilce Santana said, “What we want is for the folks who have been detained in this round of raids to be set free and to be able to have due process if they are still detained.” Santana said raids “destroy families, they spread terror, they make communities unsafe because [immigrants] are not able to reach out for services out of fear.” (Indybay, March 1)

The Feb. 28 Mercury News reported Anand Singh’s comments: “We’re here to stand for justice and due process for all people.” Singh is president of UNITE HERE Local 2, a union representing thousands of workers in the service ­industry.