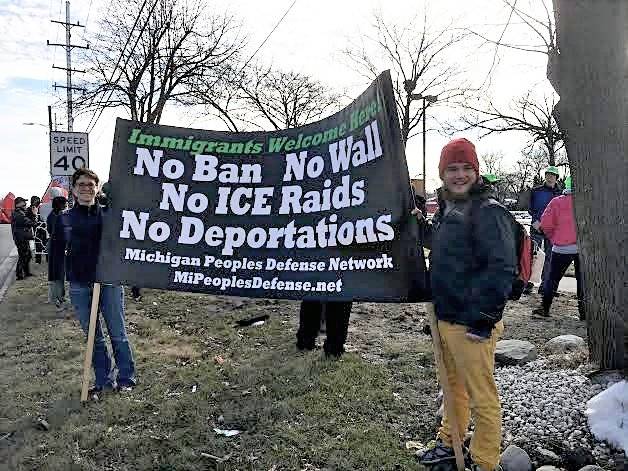 That was a remarkable turnout considering the difficulty in finding out where the conference of Spencer’s Foundation for the Marketplace of Ideas was taking place. Although the conference was announced well in advance, the location was kept secret in an effort to thwart demonstrators.

Through courageous and successful infiltration, anti-fascists determined that Spencer would be hosting a cocktail hour at a German cultural club. Then they discovered the venue had canceled Spencer’s appearance at the last minute.

The decision to change the location of the protest to the Holiday Inn Express was made after members of an anti-fascist coalition sighted Heimbach there. They and members of an ad hoc coalition formed to oppose Spencer’s visit managed to get word out to the dozens of activists who then protested outside the hotel.

Chants included “No hate in our state!,” “Cops and the Klan go hand-in-hand,” “When I’m under attack, you got my back? We got your back!” and “Warren is a union town, we don’t want this scum around.” Warren is home to a number of auto plants represented by the United Auto Workers.

Later, when it was learned that the fascists were headed to a gathering in Ann Arbor, activists followed them there and continued protesting. Between the two locations, the dedicated demonstrators were busy denouncing fascism for five to six hours.

There have been reports by anti-fascists that some of the neo-Nazis, in the process of attempting to evade anti-fascists tailing them, were arrested by the police and discovered in illegal possession of weapons. It is unclear whether Richard Spencer was among those arrested or detained.

People will confront Spencer again on March 5 in Lansing, the capital of Michigan.

Joshua Klarr contributed to this article.