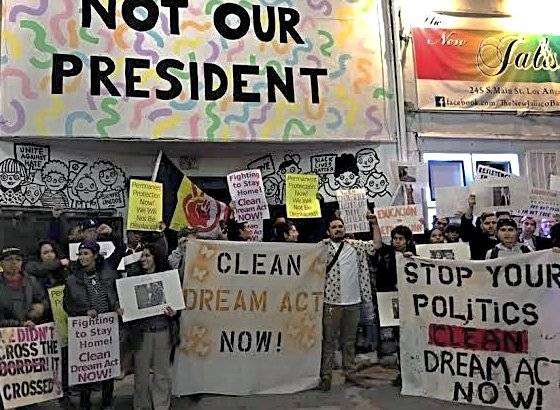 Rallying for the Dreamers in Los Angeles, Feb. 28.

Over a hundred people participated Feb. 28 in a “Fighting to Stay Home” march from McArthur Park in downtown Los Angeles to the Metropolitan Detention Center. They were marching in solidarity with the Dreamers who are marching 250 miles from New York to Washington, D.C., demanding an end to deportations and terror against migrants living in the U.S. One of their demands is for a “Clean Dream Act,” so their lives are not used to further Trump’s repressive demand for increased Mexican border security and a racist wall.

Claudia Treminio of Movimiento Consecha said: “We are demanding a Clean Dream Act to provide undocumented youth permanent protection, without pushing the rest of the immigrant community further into the shadows. We will be taking over the streets to show other immigrants that it is important to make sure our voices are heard, to organize and show up. Especially at this moment in which our communities have been terrorized by ICE” [Immigration and Customs Enforcement].