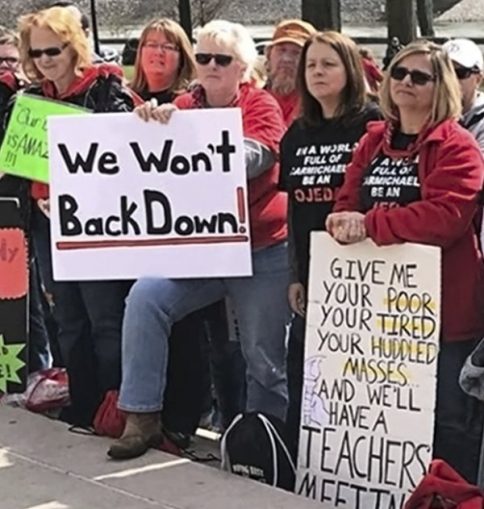 UPDATE, MARCH 6: After nine consecutive work days out on strike, West Virginia’s militant teachers and school staff faced down a right-wing governor and legislature to win a 5 percent pay raise, not just for themselves, but for all state workers. They had vowed to stay out until they won. The bill authorizing the raise passed the House and Senate and was signed by the governor this afternoon. Teachers and staff are likely to return to work March 7 but the possibility of renewed action remains, especially in relation to health insurance funding. To continue to follow workers’ struggles in the state, including Frontier workers represented by CWA, still out on strike, go to FB: WWP West Virginia – Strike Support.

March 5 — In West Virginia, famous for pitched battles between union miners and the coal barons, class war is raging. This time it’s teachers and all school employees on one side and right-wing capitalist politicians on the other. To quote the old labor song, “Which Side Are You On?” — “there are no neutrals.”

Education workers were still out on the picket lines at the end of the day, continuing their historic statewide strike for better wages, as well as blocking health care takeaways and other union-busting attacks. West Virginia ranks 48th in the U.S. for teacher wages — teachers earn less in only two other states. Starting pay is around $32,000 a year, and teachers with families must often apply for food assistance.

The strike in all 55 counties, which began Feb. 22, will continue indefinitely until the state Senate passes a bill granting state education workers a 5 percent raise.

On Feb. 28, the House approved the 5 percent pay raise, which billionaire Republican Gov. Jim Justice approved in talks with the three unions the day before. But on March 1, the right-wing Senate proposed taking away the pay raise and diverting it toward supposedly “fixing” the health insurance plan. The legislature must believe the workers will fall for this as if it’s a magic trick. This capitalist fakery only made the workers angrier.

Members of both the House and Senate are heavily influenced by the coal, oil and gas company owners of West Virginia.

For three days, including a Saturday when a special session was called, the Senate failed to pass the 5 percent raise. Then they tried to substitute a 4 percent raise under the cover of giving it to all state workers.

A joint statement from the striking unions explained why that was unacceptable: “You do not equalize pay for different groups by simply taking from one group and passing it to another. The purpose of this is clear — to divide us and to pit us against each other.”

A Senate clerical error actually endorsed the 5 percent increase briefly before pro-business senators rushed to erase the raise. One striker’s social media comment was that the legislators seemed to need a teacher to help them check their figures and their draft language.

The strikers’ impact was felt early when the governor approved, and the Republican-majority House passed, the pay hike. The governor had to back away from pushing bills that gutted seniority, promoted charter schools, prevented unions from deducting union dues from members’ paychecks, and would expand “Teach for America” — a program that hires new college graduates without teaching degrees at a lower rate of pay. These types of bills are part of a national anti-union campaign funded in part by the far-right billionaire Koch brothers.

The governor’s offer did not create a permanent fix for the Public Employees Insurance Agency, only proposing a temporary “freeze” on health care insurance premiums and a “task force” to find more funding sources. However, the worst legislative changes to PEIA, mostly various excuses to raise premiums, are paused for the time being.

The strength of what is essentially a general strike of education workers was demonstrated March 2 when 45 county school superintendents told Republican legislators that schools would stay closed until the 5 percent increase passed. Now all 55 superintendents have taken that position.

Strikers have rallied around the slogan #55Strong. The multinational, majority-women, rank and file set in motion and unsatisfied by the governor’s proposal, felt strongly they deserved a bigger say in the deal’s content. So on Wednesday, Feb. 28, workers continued to picket, with shouts of “We’re not letting anybody cross this line!” Some who voted for Trump and Republicans in the last election now point to betrayal by the rich, shouting, “Make ‘em pay in May!” when election primaries are held. (USA Today, March 1)

Under state law, public sector strikes are illegal, but West Virginia workers know labor history. The Battle of Blair Mountain in 1921 in Logan County was the largest labor uprising in U.S. history, with 10,000 armed coal miners confronting 3,000 police and strikebreakers. Throughout the 20th century the United Mine Workers was a mighty force, with wildcat strikes common, including thousands during the 1970s. Some strikers are wearing the red neckerchiefs that miners wore during the 1921 revolt.

On Thursday, March 1, the workers defiantly began their second week on strike. One union member told WW that most strikers want big businesses, especially Big Oil, taxed at a higher rate so the state can pay education workers better wages and benefits.

On March 2, 3 and 5, militant rallies drew thousands to the state capital, Charleston. On March 2, hundreds of students marched to support their teachers, holding signs and chanting, “Teachers stand for us, we stand for teachers.” They have joined teachers in occupying the Capitol building interior for multiple days.

Mond Jones, a Workers World Party organizer for the Defeat Austerity conference in Detroit on March 24, described his day in West Virginia: “On the morning of March 5 we had breakfast just inside West Virginia. The teachers at nearby tables had on strike T-shirts. They said it’s easier to organize a strike now with social media. At the Capitol there were about 10,000 people — 4,000 occupying inside and 6,000 outside. They were mostly women, all very militant. Our literature was well-received. All the unions had a strong presence, along with the Retired Teachers Association.”

Jerry Goldberg, of the Moratorium NOW! Coalition in Detroit, told the rallying strikers: “We are with you 100 percent.”

This historic struggle is not just between pro-union workers and anti-union politicians. It’s labor vs. capital. All West Virginia workers face dangers to their health and livelihoods from the predations of Big Oil and Big Banking. The state’s 2018 Executive Budget Report states: “The percentage of each citizen’s income allocated to payment of state debt to the banks and financial institutions is 2.8 percent or $1,020 per citizen.”

Fighting for the union

Unions benefit everyone. Their structure offers combat assistance, resources and organizational communication. Unions enable members to connect and build militancy from the ground up.

While worker anger has been widespread at top union leaders, who appeared ready to end the strike prematurely, strikers are reacting positively to the unions’ official announcement that the walkout would continue until the 5 percent raise becomes law. They fought to have unions and they are fighting to make them fight.

Teacher and union activist Phil, demonstrating at the Capitol building on March 1, told WW: “There’s been lots of anti-union talk from ultra-left and conservatives. Folks need to fight within their unions, to make them more progressive and class conscious. We need to radicalize and transform unions from within at the local level.

“Some believe the association leaders are negotiating directly with the governor. It’s really the legislators striking the deals and selling out the workers. These politicians have the interests of energy companies and private capital.

“The struggle of education workers and teachers is a class struggle for social justice, a social struggle against racism and capitalism and against austerity. We hope to build the idea of class consciousness through the participation of local unions. When people drop out of unions, we don’t build class consciousness. Hopefully, after this struggle, people will continue to participate and strengthen and radicalize their unions.”

Despite failings in upper-level leadership, the union is not the enemy. The enemy is the billionaire capitalist class!

Tremendous solidarity has come from other unions: Teamsters, Mine Workers, Communication Workers and even unions in other countries.

The Southern Workers Assembly issued a solidarity message: “In the days as we await the Supreme Court decision on the Janus case, which would effectively make public sector workers in all states right-to-work, we are reminded that even workers in the RTW states, concentrated in the U.S. South, can build their unions, fightback and win. The type of mass rank-n-file action displayed by WV educators is an example for us all to follow.”

The West Virginia example is already being followed. About 1,400 members of the Communication Workers in West Virginia and Ashburn, Va., walked out March 4 at midnight and are striking Frontier Communications. Many of them were learning about strikes by picketing alongside teachers. They are fighting for job security as Frontier has eliminated 500 jobs since acquiring Verizon landlines in 2010.

The world is watching the class war in West Virginia. Power to the rank-and-file union members directing their burning anger against the viciousness of the capitalist system!

Otis Grotewohl contributed to this article.