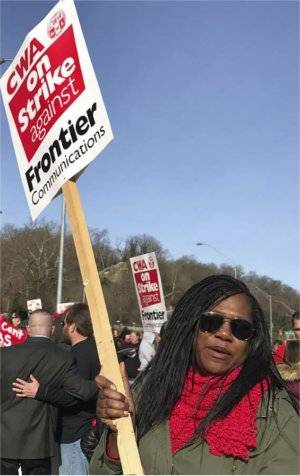 Women lead the way in workers’ rights struggles around the world. CWA worker on strike in West Virginia.

International Working Women’s Day, March 8, is a time to hail the struggles of women in the U.S. and worldwide. This special day was founded by European women socialists in 1910, who sought to honor women workers worldwide and who called for global unity and solidarity among them.

Today, it is crucial to stress the “international” essence of this day — to express solidarity with our sisters around the globe who are living under the ravages of impoverishment, workplace exploitation, racism and war caused by U.S. ­imperialism.

The call for solidarity is ever more important as the Trump administration assails with racist vitriol our sisters in Haiti and Africa, bans our Muslim sisters and their families from entering the U.S., and viciously rounds up and deports Latin American immigrants, brutally separating families.

Congress members, Republicans and Democrats, have voted another $700 billion for the Pentagon to “modernize” its weaponry and armies for expanding U.S. military operations in the Middle East, Africa, East Asia and elsewhere. The worst impact of these wars falls on women and children — a crisis which cries out for opposition and solidarity from women in the U.S.

Meanwhile, at home, the white supremacist, misogynist in the White House has declared war on the hard-won rights and gains of women, workers, oppressed communities, students, retirees, and LGBTQ people, including trans women. As a member of the super-rich capitalists, billionaire Trump has carried out their program of corporate tax cuts. He and his right-wing political cronies are determined to gut essential federal programs to further enrich their coffers and transfer billions more to the military-industrial complex. The potential harm to children, women, low-income workers, people of color, disabled individuals and seniors is enormous.

Yet, there has been active opposition to Trump’s program throughout the 404 days of his presidency. Protests have been led by women, workers, African-American and Latinx people, LGBTQ and disabled individuals, and youth.

Young “Dreamers” and other immigrants have organized against deportations. African-American mothers of slain children and their communities have opposed racist police violence. Teachers and other workers have gone on strike to demand higher wages and their rights. And people with disabilities have occupied government offices to protest cuts in vital government health care programs.

Millions of women and supporters marched in January 2017 and again this year to object to the misogyny spewed by #45 and the administration’s attacks on their reproductive and other rights.

The #MeToo Movement, initiated by African-American activist Tarana Burke, has exposed and denounced workplace sexual misconduct and inequity. Now with the Time’s Up campaign, this struggle extends from Hollywood to hotels, restaurants, fields, offices and factories.

The #MeToo Movement emboldened the young women athletes who spoke out about years of sexual abuse while training for the Olympics. But much more action is needed, especially reparations for the centuries of sexual abuse experienced by Indigenous, Latinx and African-American women due to colonization, enslavement and Jim Crow racism.

When Trump’s armed neo-Nazi and Klan supporters spewed white supremacy and anti-Semitism in Charlottesville, Va., last August, young women, people of color, workers and gender nonconforming individuals stood up to them in a strong, united counterdemonstration.

Two days after a neo-Nazi fatally mowed down 32-year-old anti-racist Heather Heyer in Charlottesville, courageous activists, led by young women of color and trans activists, toppled a Confederate statue in Durham, N.C. This act sparked similar actions in other cities.

Now a militant wildcat strike of education workers is underway in West Virginia — almost 95 percent of them women. They are defying their state government and the coal, oil and gas bosses.

This is what is needed: Bold, courageous struggles, which must deepen, grow and join forces to oppose the Trump-Wall Street-Pentagon triumvirate. Foremost in our priorities, we must show solidarity with our sisters at home, especially the most oppressed, and with our sisters abroad, who are hit hard by imperialism.

Solidarity is the essence of International Working Women’s Day.