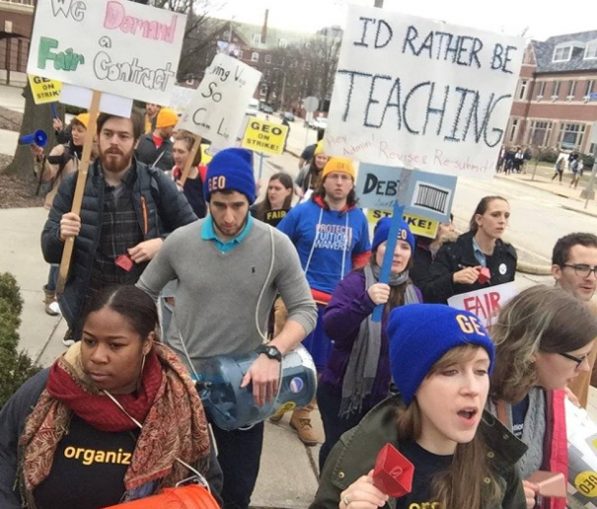 Grad workers strike at University of Illinois at Urbana-Champaign, Feb. 28.

Graduate workers at the University of Illinois at Urbana-Champaign entered their third day of striking on Feb. 28. Workers demonstrated, using empty buckets and trash cans as drums. The grad workers are represented by the Graduate Employees’ Organization (GEO).

At 8 a.m., grad workers formed five picket lines outside of each entrance to Lincoln Hall, which houses the College of Liberal Arts and Sciences. As the day progressed, the picket lines grew until they combined into one that circled the entire building. This was the third consecutive day that all classes in Lincoln Hall had to be cancelled or moved.

The GEO first secured full tuition waivers in their first collective bargaining agreement ratified in 2009. But the UIUC administration has refused to guarantee the waivers, potentially forcing graduate workers to pay $30,000 in tuition, when many live on annual stipends of $16,000.

Hundreds of graduate workers rallied with faculty and undergraduate supporters on the main quad. The UIUC administration is refusing to come to the table to bargain in good faith, so the strike will continue into March.