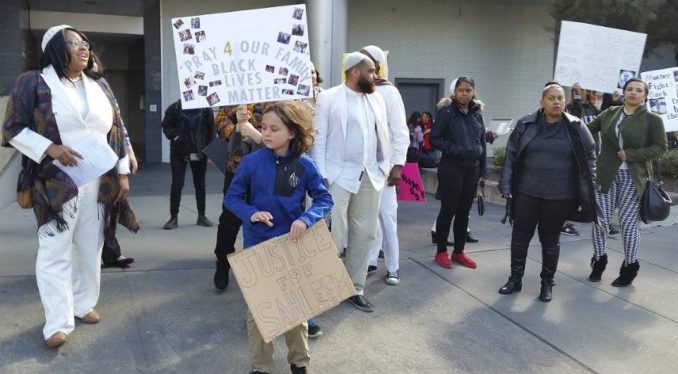 Oakland, Calif. — The family of Shaleem Tindle and other members of the community packed a board meeting of the Bay Area Rapid Transit on Feb. 22. They went to show their outrage after seeing a newly released body-camera video of a BART officer killing Tindle, a 28-year-old Black man.

BART had been forced to release the full video after it was partially leaked. The video clearly shows Tindle unarmed and rolling over with his hands up while taking three bullets in the back.

Tindle was killed by BART officer Joseph Mateu on Jan. 3, right across the street from the West Oakland BART station. The cop was back on duty only two weeks after the shooting. The family and community made their demands clear at the board meeting: Take Mateu off duty, fire him, charge and prosecute him for murder, and disarm BART police!

Family attorney John Burris said: “It’s pretty clear when I saw the video that Mr. Tindle was shot multiple times in the back at a time it was not apparent that he had a weapon of any kind.” Tindle had been in a fight with another man when Mateu ran up and fired, although he was in no physical danger himself and was not able to see any weapon in play. He never identified himself as a police officer.

KQED News reported that “Marcella Banks, grandmother to Tindle’s two children, described him as a family man. ‘I have a quiet rage,’ Banks said. ‘He’s walking down the street minding his own damn business, protecting my other daughter who had her hijab on and protecting his wife and his two children while some strange man is doing something to them.’”

Over an hour of angry and emotional testimony at the BART Board meeting by family and community included that of Cephus “Uncle Bobby” Johnson, uncle of Oscar Grant, a young Black man shot down by BART officer Johannes Mehserle in 2009. BART Board President Robert Raburn announced they would make no decisions that day. The room erupted in anger, with the family lining up in front and locking arms and everyone else chanting, “No justice! No peace!” The crowd eventually marched out and Raburn adjourned the meeting to continue in a private session.

Cat Brooks of the Anti Police-Terror Project (APTP) stated after the video was finally released: “For a month BART used the corporate media to lie to you about the murder of Shaleem Tindle. Many of you ignored the case because you thought the brother had a gun. Some of us stood up anyway, because even if he did have a gun, we are clear that all violence is state violence and losing a Black life — any Black life — matters. Even now, with the video, the state is so insidious and conniving that they are trying to convince you that you are not seeing what you are seeing in this video. Be clear — the BART PD saw this video and then cleared Joseph Mateu to go back to work.”

APTP had ended their annual Martin Luther King Day march at West Oakland BART, where Tindle was killed, to honor his memory and protest the murder.