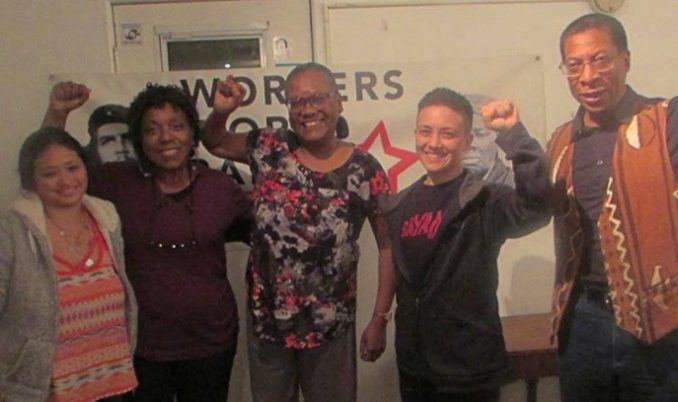 The meeting room of the Brown Building in San ­Diego’s Azalea Park neighborhood was filled to capacity. The featured speaker at the Feb. 18 Workers World Party forum was longtime leader Monica Moorehead, Secretariat member of the party and its presidential candidate in 2016.

Preceding Moorehead at the podium were Deforest R. Hancock, representing the Ordinary People Power organization and, as a formerly homeless person herself, speaking on the homeless crisis in San Diego and nationally; Dominic De Los Reyes, representing Anakbayan-San Diego and offering a detailed analysis of the struggle in the Philippines; Bree Davis, a key organizer of the 2017 San Diego Women’s March, speaking on the personal identity struggle she faced as one of thousands of Korean babies adopted by U.S. couples; and John Parker, Workers World Party leader and candidate for the U.S. Senate on the Peace & Freedom Party ticket, speaking on the revolutionary use of bourgeois election campaigns.

Moorehead’s presentation was a comprehensive and riveting overview of the history of Black struggle in the U.S., followed by a discussion with participation by audience members of some of the issues raised in the speeches. The meeting ended with everyone forming a circle, holding hands and reciting the Assata Shakur chant that begins, “It is our duty to fight for our freedom.”