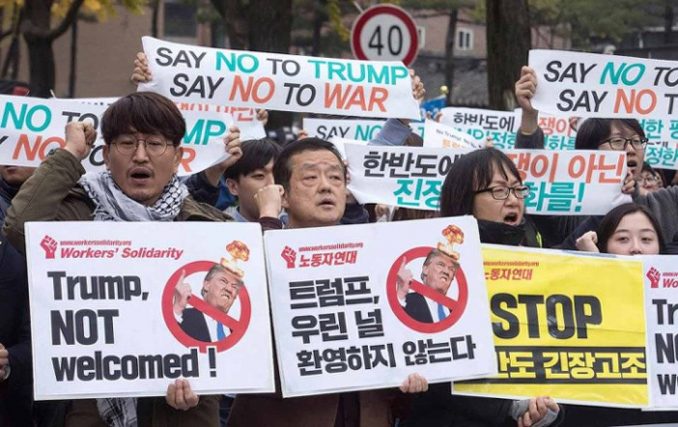 None of the major U.S. news outlets has dared to even hint at it, yet there it was, as plain as the nose on your face: the people of south Korea showing that they don’t want to be dragged into any U.S. war against their northern compatriots. They want a lessening of tensions, even as the U.S. is openly discussing carrying out an attack on the north — a course of action that could quickly escalate into a horrendous war.

This was made abundantly clear to the whole world during the opening ceremony of the Olympic Winter Games on Feb. 9, when the stadium in Pyeongchang, south Korea, rocked to the cheers of the immense crowd as, for the first time, a united north-south team of Korean athletes marched onto the field.

The one person in the bleachers not to stand for this was U.S. Vice President Mike Pence, who grimly hunkered down in his seat as everyone around him jumped for joy. Pence wouldn’t get up, not even for the national anthem of the host country.

A good part of that time, south Korea was under the draconian rule of military dictatorships. The U.S. has never signed, nor even agreed to discuss, a peace treaty with the north since the end of the brutal 1950-53 Korean War. This formal continuation of a state of war has left the U.S. in ultimate command of the south Korean armed forces. The U.S. therefore bears ultimate responsibility for the long and tortured history of repression carried out against the people of south Korea by the military.

The first general to rule over south Korea was Park Chung-hee, who took power in 1961 in a military coup and ruled until his assassination in 1979 by the head of the Korean CIA in an internal power struggle.

“At home Park maintained a policy of guided democracy, with restrictions on personal freedoms, suppression of the press and of opposition parties, and control over the judicial system and the universities. He organized and expanded the Korean Central Intelligence Agency (KCIA; now the National Intelligence Service), which became a much-feared agent of political repression. Park claimed that all his measures were necessary to fight communism. In foreign affairs, he continued the close relations his predecessors Syngman Rhee and Yun Po Sŏn had maintained with the United States. Park was responsible in large part for South Korea’s ‘economic miracle’; the programs he initiated gave his country one of the fastest-growing economies in the world.

“On Oct. 17, 1972, Park declared martial law, and one month later he installed a repressive authoritarian regime, the Yushin (‘Revitalization Reform’) order, with a new constitution that gave him sweeping powers. He grew increasingly harsh toward political dissidents. After Park’s dismissal (1979) of popular opposition leader Kim Young Sam from the National Assembly, Korea erupted with severe riots and demonstrations.”

After Park’s assassination in 1979, there was a very brief period of nominal civilian rule, but the military again openly took power in 1980. Gen. Chun Doo-hwan, who ruled until 1988, is best remembered for the 1980 massacre of an estimated 2,000 students and workers in the southern city of Gwangju, who had risen up in protest of martial law.

This writer visited Gwangju in 2000 and marched with thousands of Koreans to commemorate the anniversary of the massacre. We later went to the cemetery and placed flowers on the graves of many of the young people brutally killed in 1980. (For a detailed description of the Gwangju Massacre, see tinyurl.com/y9s3a32x.)

The military did not openly rule south Korea after 1988, but General Park’s daughter, Park Geun-hye, became president in 2013. She is now in jail for flagrant corruption. She was a darling of the notorious chaebol — the family-run corporations like Samsung and Hyundai that control much of south Korea’s economy.

Park Geun-hye was finally deposed in 2017 after a solid year of weekly demonstrations throughout all the cities of south Korea. Millions of people participated in these protests.

It is this courageous mass movement of the south Korean people that has given the present government of President Moon Jae-in the backbone to stand up to the U.S. occupiers and pursue a course of engagement with the Democratic People’s Republic of Korea in the north.