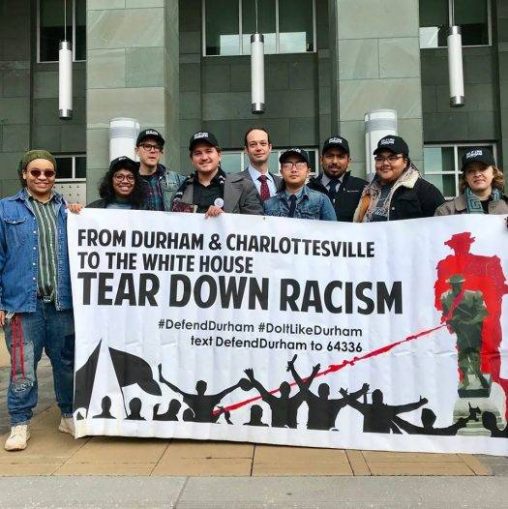 Feb. 12 — The Durham, N.C., defendants invite all those who choose to side against racism and white supremacy to come here Feb. 19-20 to pack the court and show solidarity with ongoing struggles against monuments to racism. The defendants say: “Fighting white supremacy is not a crime!”

Takiyah Thompson and seven other anti-racist activists return on Feb. 19 to Durham district court to stand trial for their actions in toppling a Confederate monument in Durham last Aug. 14.

With Thompson climbing the statue, the #DoItLikeDurham freedom fighters’ removal of the Confederate monument took place during a vigil and rally with hundreds present. This was just three days after the violent Unite the Right rally in Charlottesville, Va., on Aug. 11. Dozens of anti-racist protesters, in Charlottesville to resist the neo-Nazis and white supremacists, were injured. Heather Heyer was killed when a white supremacist member of the American Vanguard Party drove his car into a crowd.

But due to a massive outpouring of local, national and international support, those charges are all that’s left of the original outrageous felony charges against the defendants.

Support for them has been wide ranging. On Aug. 17, the day when many defendants were scheduled to turn themselves in, hundreds lined up to do the same, each one saying, “Arrest me too!” because they were also fighting white supremacy.

Thousands poured into Durham streets on Aug. 18 and kept them free of white supremacy when the Ku Klux Klan threatened to march in opposition to the freedom fighters. Caravans of activists from around the U.S. travelled to Durham on Sept. 12 to defend the felony-charged anti-racists at their first court date. Solidarity messages poured in from around the globe, with much international press and video coverage.

The result? In January, after six months of mobilizations at court hearings, dozens of solidarity actions and statements, and thousands of phone calls to city, county and state officials, the felony charges of inciting a riot and participating in a riot were dropped. It was a huge victory.

Another four activists had been arrested at the Aug. 18 action in Durham. They were charged with wearing masks or carrying weapons at a demonstration. On Feb. 18, one accepted a plea bargain deal and charges against the other three were dismissed on constitutional grounds.

All charges had previously been dropped against three other activists from the Aug. 14 toppling rally. A fourth activist accepted a plea bargain deal.

The degree of racist oppression overall in Durham is severe. During early January, a camera recorded two hooded figures posting an anti-Semitic, anti-communist flyer with Nazi slogans on the door of the Durham Solidarity Center.

In the aftermath of the statue removal, Durham Sheriff Mike Andrews raided the homes of local activists and arrested more than a dozen people. Andrews has been singled out by Durhamites, who demand accountability for nearly a dozen deaths in the county jail during his tenure, including 17-year-old Uniece “Niecey” Fennell.

Migrant rights activists have also challenged the sheriff’s ongoing collaboration with U.S. Immigration and Customs Enforcement, which has resulted in dozens of deportation orders, including for high school student Wildin Acosta, who was picked up at his bus stop in 2016.

In response to repression, comrades from Workers World Party, as well as community members, held a Jan. 13 People’s Tribunal to put white supremacy on trial. Takiyah Thompson commented to WW: “The People’s Tribunal is really meant to pull together members of the Durham community, to bring charges against the sheriff, the police, the court systems and the various systems of racist oppression in the city.”

Throughout the fall and winter, Thompson has been on a U.S. tour to build solidarity for the Feb. 19-20 trial of the Durham anti-racist defendants. Thompson has spoken to large, fiercely supportive crowds in New York, Boston, Chicago and Madison, Wis., as well as given many national and international news interviews.

The defendants continue to affirm that removing symbols of white supremacy from public spaces is no crime. They note that the North Carolina Legislature tried to preempt removal of racist monuments by passing a 2015 law prohibiting local governments from taking action to remove any “historical” monuments. The defendants assert that their alleged role in the actions should be considered a community service, necessary to the health and well-being of their community.

Fighting white supremacy is not a crime!