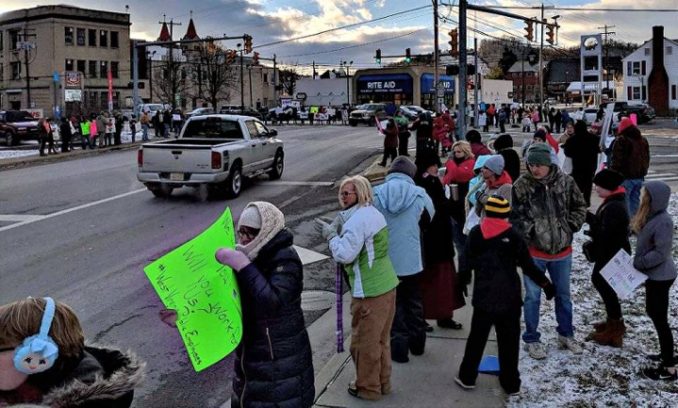 Teachers, staff, students and community rally Feb. 2 in Lewis County, W. Va., part of a wave of protests against right-wing attacks on unions and public education.

Teachers and school support staff are currently in motion in West Virginia.  On Feb. 2, roughly 2,000 teachers and service employees from Mingo, Wyoming, Logan and Raleigh counties staged a walkout and took their message to the capitol. It was visually reminiscent of the Wisconsin public employee mass protests in 2011. In other counties teachers held walk-ins or informational pickets with additional school personnel, state employees and parents that day.

The American Federation of Teachers-West Virginia and West Virginia Education Association have been working with each other in a united front across the state in response to anti-union and anti-public education attacks coming from the far-right, Republican-dominated legislature.

All state and education workers are facing unaffordable increases in health care premiums and deductibles through the Public Employees Insurance Agency (PEIA). State employees are represented by the Communication Workers and United Electrical Workers.

In addition to increases in PEIA, a bill was introduced to strip teachers of their seniority, which is the primary factor in determining reductions and transfers each year.  Eliminating seniority would permit administrators to openly practice discrimination and favoritism.

West Virginia Teachers rank 48th in the U.S. in pay. The billionaire governor did introduce a 1% increase for teachers, which the legislature passed.  Most people feel that is a slap in the face, especially considering the potential increases in insurance costs starting July 1. Carlene Rhodes, a special education teacher at Westwood Middle School, told the Morgantown Metronews, “A one percent raise doesn’t even cover the cost of the healthcare.” (Morgantown Metronews, 2/3/18). It is common for many teachers to work second or third jobs to make ends meet.

Like all of the United States, West Virginia is a state that rests on stolen Indigenous land. It is a place that has been exploited by resource extraction companies for centuries, where the politicians have always prioritized the needs of coal, timber, oil and gas bosses over the needs of the people that live and work there.

West Virginia is home to many historic class battles between coal miners and companies. Gov. Jim Justice is a coal baron himself and a personal friend of Trump.  He was elected in 2016 as a Democrat but switched parties after last year’s legislative session.  He is also the proprietor of the Greenbrier resort in White Sulphur Springs, W. Va., where the GOP recently held its congressional retreat.

The state does not have collective bargaining. The arch-reactionary legislature passed “right-to-work” (for less) legislation in 2016, which negatively affects unions in the private sector.  Education and state employees already worked under RTW conditions.

While West Virginia public workers have no collective bargaining, teachers did carry out an 11-day strike in 1990, which brought many gains, including decent pay. Once again, education workers are showing their strength. Union rallies are being held across the state and are expected to continue until the legislative session concludes on March 10. While union membership is optional, most workers belong.

As the people mobilize, legislators are introducing more archaic and barbaric bills against the working class and oppressed. There will be a statewide rally at the capitol in Charleston on February 17.  Before or around that time there may be a statewide vote on whether to walk out.

The state has already made some concessions in relation to PEIA policy proposals, but there is still a long way to go. The solidarity among union members and between different unions is showing the strength of the rank-and-file.