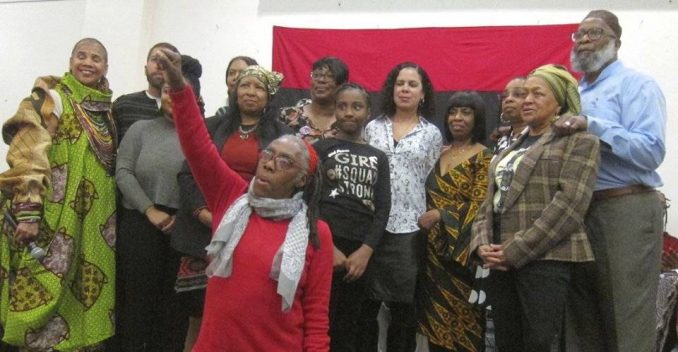 Jan. 27 — The daughters of Russell Maroon Shoatz, Jericho visitors of Jalil Muntaqim, Sundiata Acoli’s attorney, the International Concerned Friends and Families of Mumia Abu-Jamal and others filled the hall at tonight’s 22nd Annual Dinner Tribute to the Families of Our Political Prisoners/POWs at the Unitarian Church of All Souls in Manhattan. The dinner paid homage to these prisoners and their families, such as those of the MOVE 9, by collecting funds for the prisoners’ commissary accounts.

The Malcolm X Commemoration Committee and the National Alumni Association of the Black Panther Party sponsored the event. The cultural performances and tributes showed determination and unity. The group recognized, “Those who spread the word: our revolutionary griots,” referring to Black journalists and artists who are imprisoned for having gone out of their way to expose the racist injustice of U.S.-held political prisoners.

Malcolm X Commemoration Committee chairperson Dequi Kioni Sadiki honored the following people, along with the prisoners themselves: Nayaba Arinde, New York Amsterdam News; Basir Mchawi, Education at the Crossroads: Sally O’Brien, Where We Live/WBAI radio; photographer Solwazi Afi Olusola and performing artist Ngoma. Discussing Black journalist Mumia Abu-Jamal, Sadiki called for support for the “many who have now been locked down for over four decades.”