The Los Angeles Times has a long history of viciously anti-union ownership going back 136 years. What started as a campaign among journalists over workplace grievances, like gender pay inequities and a unilateral change in vacation time in 2016, evolved into broader concerns about the paper’s direction, the newsroom’s editorial independence and competence of top management. Staffers were also upset by the Tronc media company’s lavish compensation plan for executives, which increased 80 percent in 2017, while journalists were told there wasn’t money for raises.

Support for unionizing grew in August when Tronc fired top Times editorial leadership, prompting concerns over who would replace them. LA Times CEO and publisher Ross Levinsohn, known for his “frat-house” behavior, didn’t help. (Tronc announced immediately after the vote that Levinsohn was on a leave of absence; he has since been replaced.)

After the union drive was launched publicly in October, the paper’s ownership mounted what staffers called a “condescending” campaign, which, “in its oafishness and ineptitude,” included frequent emails urging workers not to unionize. Staffers told HuffPost that “management’s aggressive anti-union posture flipped more votes in favor of unionizing.” The writers “got sick of being talked down to, as if they weren’t journalists.”

When votes were tallied Jan. 19 by the National Labor Relations Board, the results were 248 to 44 for representation by the Washington, D.C.-based NewsGuild-CWA (Communication Workers). “Having a union won’t stop layoffs, but [with] a collective voice the days of the newsroom passively standing by while corporate management did whatever they wanted are over,” Times reporter Bettina Boxall told HuffPost. (Jan. 19)

School bus drivers in Seattle and now Glendale, Calif., are facing a goliath: the First Student Corporation’s global headquarters are in Britain. Teamsters Local 174 in Seattle, which represents 400 drivers in King County, held a one-day unfair labor practices strike on Nov. 29. They voted down a unilaterally imposed contract with no pension terms and a substandard health care plan, which even the company admitted does not meet minimum coverage under the Affordable Care Act. No wonder the workers call the company “the Wal-Mart of the school bus transport companies.” (teamsters174.net, Jan. 6)

In Glendale, drivers, represented by Teamsters Local 572, are entrusted to transport special needs students in three regional school districts. But these buses often lack working radios or public address systems, which are critical if a student has a seizure. When First Student refused to offer terms for better pay and health benefits, a guaranteed hourly pay rate and safer conditions — both in the bus yard and on the buses themselves — the ­local called the unfair labor practices strike Jan. 18. First Student has not come to the table since the strike began.

But solidarity is spreading. The Seattle Educators Association pledged to have a solidarity walkout, and in union spirit, the Boston School Bus Drivers, United Steelworkers Local 8751, passed a resolution and donated $500 to Teamsters Local 174. Applause to those donating, walking out and showing solidarity against this conniving company. 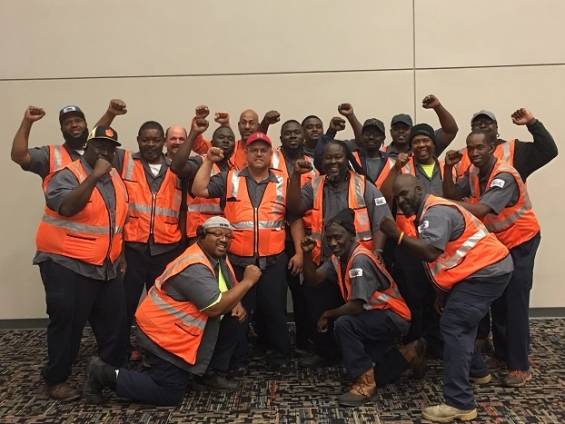 Some 53 short-haul drivers at South Carolina truck company Container Maintenance Corporation voted to join Teamsters Local 509 in mid-December. These workers haul container cargo between the Port of Charleston and the rail yard in North Charleston. Last August, the company changed workers’ pay from hourly to meritocracy-based “production”; then it cut their pay. As worker Reggie McQueen recounts, he applied for a home loan, but when the underwriter called the company, it was told he was just a “production worker” with no verifiable income. So McQueen’s loan was rejected. That motivated the workers to contact Local 509.

As Teamsters, the workers will be able to negotiate a package of pay and benefits that supports their families. And this victory “will pave the way for many others at the Charleston ports,” said Local 509 President James Todd in a Jan. 1 Teamster release. This victory is the fourth recent win by Teamsters at goods transport companies coast to coast in the past five months! Port drivers — both those misclassified as independent contractors and those who are employees — are driven down by low wages and unpredictable income. But they are fighting back against a system rigged by the capitalist bosses. (Payday Report, Dec. 15) Lesson learned: When bosses attack, the only retort is to fight back and organize!