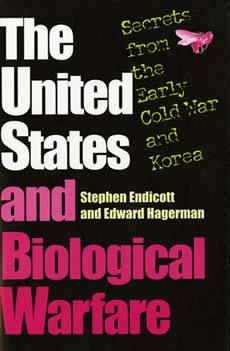 The U.S. government denies using biological warfare during the Korean War (1950-53), but mounting evidence reveals the Pentagon is lying.

Biological weapons had been used by the German Army in World War I to contaminate livestock, animal feed and humans. Given the horrific effects, this weaponry was widely condemned. However, the U.S. and Japan refused to sign treaties prohibiting this type of warfare.

The Japanese military conducted biowarfare in the 1930s and 1940s, with China their primary target. The U.S. obtained a Japanese report on such experiments in 1941 and built on this research at the U.S. Army Medical Research Institute at Fort Detrick, Md., as early as 1942. After World War II, many Japanese scientists were spared (including chief germ warfare expert Gen. Shiro Ishii), courtesy of efforts spearheaded by Gen. Douglas MacArthur.

Nicknamed “The Institute,” this facility became the nerve center for biowarfare research during World War II in a joint effort of the U.S., Canada and Britain.

After the Axis forces surrendered, the U.S. and Western allies turned to fighting socialist countries. The Korean War (the “Forgotten War”) was launched on June 25, 1950. The Democratic People’s Republic of Korea still lives with the haunting memories of crimes inflicted by the U.S. military. During the three-year invasion, the U.S. dropped over 635,000 tons of explosives on numerous villages in a massive carpet-bombing campaign, destroying farmland and demolishing infrastructure.

In February 1952, the foreign minister of the DPRK announced that the U.S. Air Force had dropped plague- and cholera-infected insects in the north, encased in bombshells. The governments of the People’s Republic of China and the Soviet Union also found evidence supporting these allegations. International investigators examined the evidence and reached conclusions that countered those of the Pentagon.

The ‘monstrous war’ against Korea

Australian correspondent Wilfred Burchett was the first Western journalist to enter Hiroshima unescorted by the U.S. Army after the dropping of the atomic bomb. His report to the London Daily Express of Sept. 5, 1945, called “The Atomic Plague,” alerted the world to the lasting effects of radiation.

Burchett later penned the book “This Monstrous War” based on his experiences during the Korean War. Australian National University professor Gavan McCormack says that the manuscript was seized by U.S. Customs “and dumped in the sea on its arrival in that country later in the same year [1953], and as a result no major American library possesses a copy to this day.”

In the book, Burchett described the use of biowarfare on the Korean peninsula in a chapter titled “The Microbe War.” During a televised interview, Burchett stood by his reporting: “Germ warfare was carried out. There’s no doubt, nothing can shake me on that.”

In March 1952, the International Association of Democratic Lawyers  published its “Report on U.S. Crimes in Korea,” including the discovery of “asphyxiating and other gases or chemical weapons” by the U.S.

The IADL report concluded: “By the deliberate dispersion of flies and other insects artificially infected with bacteria against the Korean People’s Army among the civilian population of North Korea, with the intention of spreading death and disease, a most grave and horrible crime has been perpetrated by U.S. forces in Korea, contrary to the provisions of the Hague Convention concerning the laws and customs of war on land of 1907, and to the universally accepted law prohibiting bacteriological warfare which was re-stated in the Geneva Protocol of 1925.”

Another investigation, conducted by the International Scientific Commission led by British scholar Joseph Needham, published a report on “Facts Concerning Bacterial Warfare in Korea and China” in 1952. According to the report, “The peoples of Korea and China have indeed been the objective of bacterial weapons. These have been employed by units of the U.S.A. armed forces, using a great variety of different methods for the purpose, some of which seem to be developments of those applied by the Japanese army during the second world war.”

For U.S., ‘Korea a preview for Vietnam’

Canadian historians Stephen Endicott and Edward Hagerman co-authored “The United States and Biological Warfare: Secrets from the Early Cold War and Korea” (1999). Examining the top-secret history of biological weapons during the Cold War, their research corroborated many of the conclusions made by the DPRK, including the use of contagious pathogens.

As noted in a press release for the book, “The evidence points to the conclusion that the United States government lied to both Congress and the American public when it claimed that the American biological warfare program was purely defensive and for retaliation only.”

Dr. Endicott told this writer in an email on Sept. 17, 2017: “I still stand by the judgments we made in that book. No other information has appeared to make me change my mind.”

In the book “Terrorism and War” (2002), historian Howard Zinn wrote, “Most Americans have no idea what we did in Korea, but Korea was really a preview of Vietnam, particularly in the use of napalm and the bombing of villages, which contributed to more than 2 million people dying, most of them civilians.”

The U.S. has denounced the DPRK’s current weapons program, meanwhile ignoring its own crimes. A brief track record includes using Agent Orange during the war in Vietnam (1962-75), depleted uranium munitions during the first Gulf War in Iraq (1991-92) and white phosphorus in Fallujah during the second Iraq War (2004).

The Pentagon continues to impose sanctions and threatens war against the DPRK. The unpleasant truths suppressed by the ruling class must be exposed in order to halt the grinding gears of the war machine.