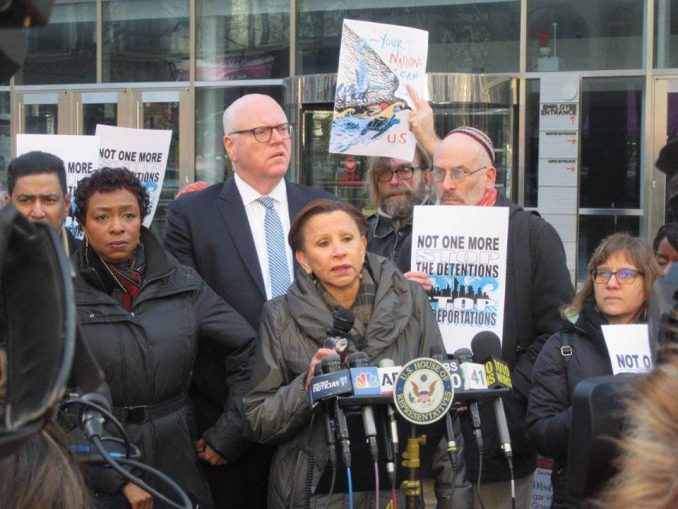 UPDATE: The New Sanctuary Movement announced Jan. 29 that “After weeks of unrelenting community mobilization, Judge Katherine Forrest ruled this morning that ICE denied Ravi Ragbir due process by detaining him in his routine check in on Jan. 11. That means Ravi will get to fight his ongoing case from home rather than from behind bars in detention. The fight is not over. This ruling only affects Ravi’s detention, not his pending deportation. …Today’s decision is proof that organizing and the power of community will ultimately set us free. That’s why we must keep up the fight for the thousands of people facing the same racist, unjust, and escalating treatment from ICE every day.”

On the morning of Jan. 27, nearly 100 people protested outside the Immigration and Customs Enforcement office at 26 Federal Plaza in New York City to support Ravi Ragbir, an immigrant rights leader from Trinidad who is head of the New Sanctuary Coalition of New York, and Jean Montrevil from Haiti. Both were arrested by ICE agents earlier in January. U.S. Reps. Nydia Velázquez and Yvette Clarke from Brooklyn spoke at the rally in support of the two prisoners.

Ragbir is being detained in the Bronx and has another hearing scheduled for Jan. 29, at which another demonstration is planned. Montrevil has already been deported to Haiti, where he is fighting for his freedom. The slogan for the demonstration was “Build bridges, not walls.”