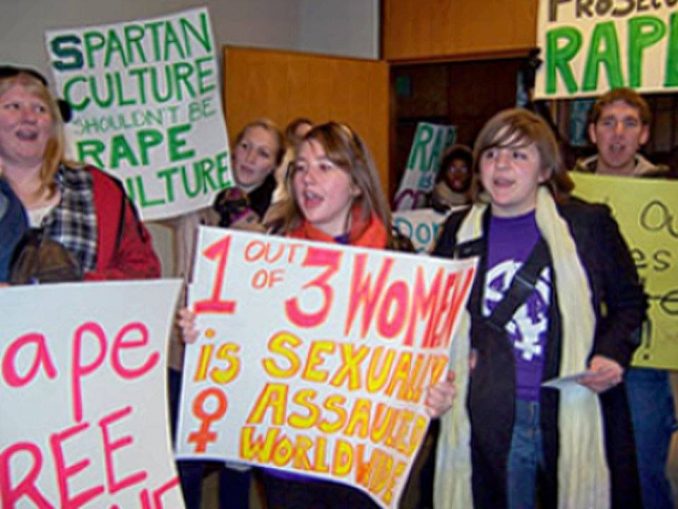 Students marched on the campus of Michigan State University in East Lansing, Mich., on Jan. 26, demanding safety and accountability from university officials in the ever-widening sexual abuse and sexual assault scandal rocking the university.

The focus is now turning from Olympic gymnastics to MSU’s iconic and monied basketball and football programs and how accusations against student-athletes have been handled or mishandled by coaches and university officials.

Ingham County (Michigan) Circuit Court Judge Rosemarie Aquilina handed Larry Nassar his “death warrant” on Jan. 24, after seven days of heart-wrenching and powerful testimony from his victims. She sentenced the serial pedophile to 40 to 175 years in prison, to be served following Nassar’s 60-year term for federal child pornography convictions.

The rising tide of the #metoo and #timesup movement across the U. S. propelled the Nassar case into the national limelight. One after another, more than 150 young women, many of them Olympic champions, entered the courtroom to courageously confront their abuser, tell their story and demand justice from a system that failed them at every turn. (See Monica Moorehead’s Jan. 23 “Gymnasts bravely expose Nassar sexual abuse” at tinyurl.com/yc27va8h.)

Nassar was a sports physician at MSU for over 25 years. There he preyed on girls and young women, especially young gymnasts who were sent to him by USA Gymnastics and the U.S. Olympic Committee. Girls as young as 6 were required to submit to physical examinations from Nassar, who used this as a way to cover up sexual abuse. Young women suffered at his hands for years, even after some had reported him to many different authorities.

He was finally exposed in 2016 after years of painstaking work and evidence collection by Rachael Denhollander, a gymnast survivor who became an attorney, coach and mother.

Following Nassar’s sentencing, Lou Anna K. Simon announced her resignation that day as MSU’s longtime president. Acceding to a demand from the USOC, the entire board of USA Gymnastics announced its resignation on Jan. 26.

Dantonio has arrogantly denied any wrongdoing or cover-up and called the allegations “completely false.” Dantonio is the winningest coach in Spartans football history and was celebrated for his team’s “comeback season” in 2017 even after several players were expelled for sexual assault.

Despite mounting pressure, members of the statewide-elected MSU Board of Trustees, the university’s governing body, have refused to step down.

Meanwhile, the National Collegiate Athletic Association and the Michigan attorney general’s office are among the official entities that have announced investigations of MSU’s handling of the rampant sexual abuse by Nassar that went unnoticed and unchecked for over 25 years.

The ESPN report includes an account of allegations brought by a student in late August 2010 that she had been raped by two members of the basketball team. The team’s coach Izzo is a Hall of Fame member who has taken the Spartans seven times to the NCAA Final Four.

At the time, Workers World covered the struggle at MSU led by the Coalition Against Sexual Violence, which fought to bring justice to the victim and create a safer environment on campus.

“The university administration has failed to suspend or expel the players from MSU, and has not even released a statement condemning the assault. In addition, Residence Life, the department in charge of on-campus housing, has failed to remove the players from their dorm room, further endangering women at MSU. Neither the director of MSU’s Athletic Department, Mark Hollis, nor men’s basketball coach Tom Izzo has commented publicly on the assault.

“By failing to take action, punish the assailants or respond to this act of violence, MSU’s administration, Residence Life and the Athletic Department send the message that students can commit acts of sexual violence against other students without consequence. It also sends the message to survivors of sexual assault that their experiences are not significant to administrators, prosecutors and others with authority, thus discouraging future survivors from reporting assaults.”

Coalition members were harassed and threatened at the time for daring to expose what was going on with the distinguished men’s basketball team. A Spartans player yelled “F**k you, b**ch!” at the activists as they protested at an athletic parade. A banner drop (“Rape is a Crime”) inside the Breslin Center resulted in students being manhandled, cursed at and ejected from the premises. (See WW articles at tinyurl.com/ycnoro9w and tinyurl.com/y8ur27wd.)

If MSU had acted properly in response to the coalition’s charges, years of additional harassment and assaults could have been prevented.