In December, the Department of Homeland Security ended temporary protected status (TPS) for 59,000 Haitians.  On Jan. 8, it announced ending TPS for 200,000 immigrants from El Salvador.  TPS is granted to immigrants from countries suffering from natural disasters or civil wars.

Sam Ordóñez: How is the decision to end TPS affecting the Haitian community? 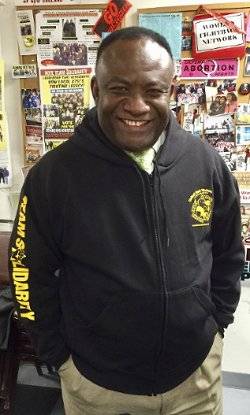 André François: It’s really alarming. A group of Haitians, after the earthquake, came here and got TPS, the temporary protective status, to stay here and since that time some of them went on to have children and build some kind of life for themselves. Some of them even bought houses and then have babies born here. If you tell them that you’re not gonna renew TPS for them, it’s devastating. It puts them at a big setback, let alone talking about deporting them, sending them home and breaking families.

You’re having people who are selling their belongings at a lower price just to liquidate them. Everybody is worried about what is what, what are they gonna do?

And home is not that good still. It’s even worse than after the earthquake. I’ve heard the president saying, “They no longer have hardship down there.” They have more hardship than ever!

Even with the new [Haitian] president in place and things seem to be going somewhat in order, you still have the famine, you still have a country with no work, with no infrastructure, with nothing. Some of the people actually would rather go to jail, because in jail they would have a meal, they would be safe.

We are good people, everybody knows that. We work hard. We have the greatest doctors, surgeons, just about in every state. If you go down to Boston Medical Center right now you’ll find a doctor named Doctor Larrieux, from Haiti. He’s one of the top surgeons in the country, graduated from Harvard, teaching the other doctors. He speaks the same Creole I speak. He came in here already old and with his knowledge.

I was a Dreamer without a green card. And I was given a chance and now I have become the president of a fairly large local union.

SO: How will this decision affect the bus drivers? Why is this a union issue?

They’re not going to come out and tell you what they have. But as president of the union, I know a few that came to me confidentially and told me that they have this issue. And that’s going to be a problem for the city of Boston that has good, decent bus drivers picking up their kids, dropping off their kids, having a family, already situated.

The workforce is gonna lose that driver. They’re already short on drivers. It will be a sort of job action without us doing a job action as a union.

I think all this stems from the racism of the government, from the very top, like Donald Trump for example and his clan, the people around him, who surround him. Even recently the attacks on Haitian workers, right after he says that Haiti is a shithole country he came out with some more hatred, talking about banning, dismantling or disregarding all the programs that used to bring farmers and low-skill workers from Haiti. So this vendetta is not only racist, it’s inhuman.

[Author’s note: the Trump administration recently decided to remove Haiti from the list of countries eligible for H-2A and H-2B visas used for seasonal agricultural and low-skill work.]

SO: What is the union doing to build solidarity and to fight back against these decisions?

AF: Well, I personally went to a lot of rallies and a lot of protests, and demanded meetings. I was at the Statehouse not too long ago talking about DACA [Deferred Action for Childhood Arrivals] and TPS. So we fight against it, and we send some messages to the powers that be, down to Beacon Hill and down to the Statehouse. We write resolutions and we participate in all the meetings.

SO: How are workers in the bus yards and at the union meetings talking about these decisions? What kind of discussions are happening?

AF: We heard the rules, we heard what some of the lawyers are saying. We talked about how we can fight it in solidarity with other unions that have a significant amount of TPS workers as well and then do everything that we can do to correct that, to make this president think differently, to bring in some new laws or pass some resolutions that will permit these people to become permanent so they can continue to live in the society in this country in peace. That TPS actually breaks families, leaves people in fear, all kinds of problems.

SO: How can the broader community in Boston and the rest of the U.S. help win this fight? What can those of us who are citizens do to help fight against these attacks?

AF: It has to be some grassroot work, some grassroots where everybody, whether you’re a TPS holder, or a citizen or whatever, you come out and be involved. We need more networks, we need more outreach. Spread the word until everybody has that, y’know, old school stuff. Come out in full [support] in every demonstration and voice their opinion about how important it is for the government to extend TPS. Give the people not only an extension but permanent residency to stay in the country.

SO: The last thing I wanted to ask you about is the significance of the 1804 Movement that’s going on right now in New York.

AF: 1804 is the year of our independence. It was why you notice that every 1st of January that Haitian people are celebrating with squash soup, which was a delicacy for the slaves. The white folks would have the slaves cook the soup for them and then the slaves would not be able to eat or drink from that soup.

In 1804, Haiti was the poorest place and the only one that took its independence and that was effective. The only mis effectiveness that was in it was that [the colonizers] left us with no resources, and instead of helping, they exploited the country, by getting all the mines and all the gold and all the resources the country had under the ground, above the ground, and then they didn’t help. They want to leave the country instead of repairing it. So it’s that demand for reparations that would be doing something for Haiti.

So 1804 can come back again, and we’ll let them know that it will come back again. There’s some more of the same 1804 folks still around and we’ve got a lot more where that came from. So Trump better know that we’re not gonna lay down and take his attacks like that.

The other day, I was in a meeting with the CEO of Boston Public Schools. I told him, given the number of Haitians we have in the city driving school buses, I already alerted all the parents that we’re not happy about what Trump’s talking about, and Trump’s decision on TPS, and a whole bunch of other issues, particularly that thing that Trump talks about the “shithole countries.”

Trump might create, in essence, his own work action, his own strike, because if everybody is doing something to respond to him, and to go after him about TPS, we’re going to be participating. We’re gonna participate real big.