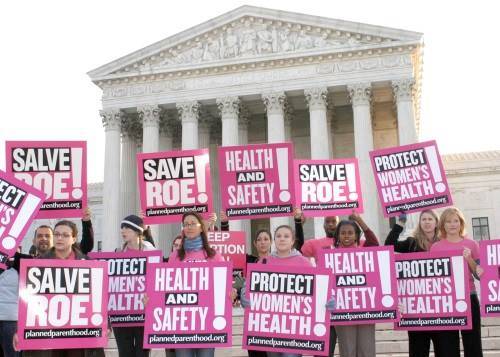 The notoriously women-hating, blatantly white supremacist, anti-abortion Donald Trump administration timed a draconian law and hostile new federal rulings to precede the 45th anniversary of Roe v. Wade, the Supreme Court decision legalizing abortion, on Jan. 22. These were rolled out as fodder for his base at the annual anti-abortion march in Washington, D.C., on Jan 19.

That day, the House of Representatives passed the so-called “Born-Alive Abortion Survivors Protection Act.” Based on junk science and scare tactics, the law promotes the myth that babies are “born alive” during second-trimester abortions (up to 24 weeks) and are routinely murdered by clinicians. Viability of a fetus — its ability to live outside the womb — is generally viewed as between 25 and 26 weeks.

The “Born Alive” bill, modeled on cynical Americans United for Life legislation, spells out criminal penalties for abortion providers with fines, up to five years in prison and possible prosecution for murder.

One practitioner described the bill as written by someone who “has no idea of what an abortion procedure actually is.” According to a 2017 fact sheet from the Guttmacher Institute, the reproductive rights research group, 89 percent of all abortions occur within the first trimester (the first 12 weeks), with 66 percent in the first eight weeks. The bill was denounced by the head of the leading U.S. group of obstetricians and gynecologists as yet another attempt to deny women access to “evidence-based” abortion care. (Rewire, Jan. 19)

The Trump-controlled Department of Health and Human Services launched on Jan. 18 the Conscience and Religious Freedom Division in its Office of Civil Rights. It offers so-called “conscience protections” for health care providers who don’t want to treat LGBTQ patients or provide reproductive health care for them, thus promoting discrimination. However, as Rewire points out, LGBTQ people routinely face “discrimination and mistreatment” from providers. (Jan. 18) Litigation by LGBTQ and other legal groups is planned.

According to the Kaiser Foundation, Medicaid covered nearly four in 10 low-income women of reproductive age (15 to 44) in 2015. That means when Trump attacks Medicaid he is waging war on women are disproportionately low-wage working women of color, often single mothers, young women, those with disabilities, those living in rural areas and women who have been subject to domestic violence.

In 2015 Medicaid was the leading source of public funding for family planning, accounting for 75 percent of all public funds spent on contraceptive services and supplies. However, because of the Hyde Amendment, passed in 1976, no federal or state funding goes to poor women for abortions except for a tiny percentage of cases of rape, incest or conditions that threaten the life of the woman.

According to Destiny Lopez, co-director of All Above All*, a coalition of 130 reproductive rights and justice groups mobilizing to overturn Hyde, “It’s important to understand that the Trump/Pence administration and our anti-abortion Congress are using the Hyde Amendment as their weapon of choice to stop women from getting abortions. We see the tentacles of the Hyde Amendment everywhere.”

Now that’s in the spirit of Roe v. Wade.