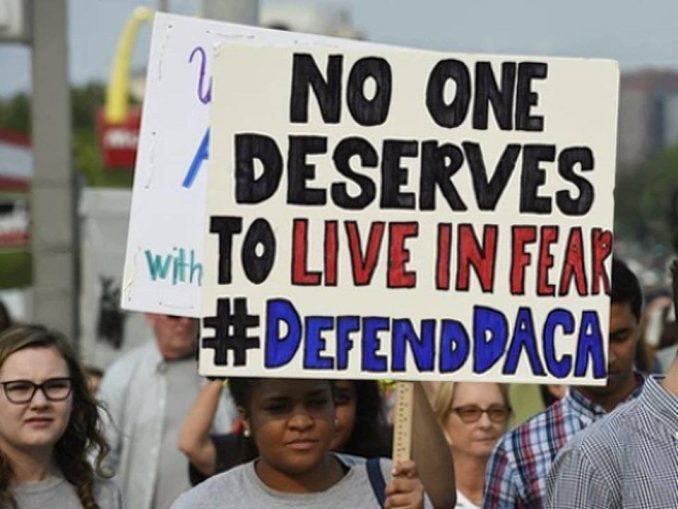 The working-class movement and the oppressed here must answer Trump and the entire racist, anti-immigrant establishment with cross-border solidarity, with class solidarity toward all workers, no matter where they come from, in a common struggle against the exploiters.

UPDATE: Jan 23 — The Democratic Party leadership has agreed to end the government shutdown in return for a pledge by Republican Senate leader Mitch McConnell to “be fair” in taking up immigration. The lives of 800,000 dreamers are in the hands of the Senate and House Republican anti-immigration racists.

Jan. 22 — The present government shutdown crisis is essentially about immigration and Deferred Action for Childhood Arrivals (DACA). There could be a surprise deal at any time that would put an end to the shutdown. But this crisis has already revealed much.

In this struggle, the basic characteristics of the primary players have come to the fore. The relentless, brutal, racist cruelty of Donald Trump and the Republican Party has stood out. On the other hand, the cowardice and opportunism of the Democratic Party leadership has been laid bare.

The cynics of the Republican Party tried to force the Democratic Party into a deal to stop the shutdown by holding out a six-year extension of the Children’s Health Insurance Program (CHIP). The Republicans don’t care one whit about CHIP. Funding for CHIP was passed in the House on Nov. 3, 2017, and has been sitting in the Senate ever since. The health care of 9 million children has been held hostage by the Republicans as a wedge against the Democrats.

At the same time, the Democratic Party leadership, in the person of Sen. Chuck Schumer, got on his knees before Trump, offering $20 billion for a border wall along the Mexican border as part of an attempt to get a last-minute deal and avoid a government shutdown.

This craven concession to the racism, repression and massive militarization of the border is aiding Trump’s hard line on immigration. As such, it is unconscionable opportunism. It should be noted as well that the Democrats, led by Schumer and Rep. Nancy Pelosi, are motivating an end to the shutdown by citing the need for military preparedness and planning.

And beneath it all, it is clear that while there is a “shutdown” of many vital social services, with tens of thousands of government workers facing unpaid furloughs, the repressive apparatus of the state — the military, ICE, the FBI, courts, etc. — will continue to function.

DACA at core of shutdown struggle

At the core of the shutdown is the struggle over continuation of the DACA program set up by former President Barack Obama. It allowed more than 800,000 immigrants, who were brought here by their parents when they were children, to stay, provided they went to school, joined the military or otherwise conformed to government guidelines.

These Dreamers came out of the shadows of living without papers, revealed themselves to the immigration authorities and registered for Dreamer status. They all now have work permits and have been living here for years. Most of them have no connection to or are completely unfamiliar with their countries of origin.

This present government shutdown crisis was set off when Trump cancelled the DACA program last Sept. 5 and destroyed the protected status of DACA immigrants. Trump gave Congress until March 5 to “fix” DACA. This was Trump’s way of ducking immediate responsibility for the mass deportation of 800,000-plus Dreamers while appealing to the right-wing base of the Republican Party and his own base by being tough on immigration.

In the shutdown struggle, Trump has been guided by his military handler, John Kelly — a Marine general and his chief of staff. Kelly and Stephen Miller, a right-wing Trump adviser, have blocked the way for any deal on allowing DACA to resume. Kelly represents the direct intervention of the military brass into White House politics.

Kelly, the military and Trump

As former head of the Southern Command, Kelly was an enforcer of the repressive political, social and economic conditions in Mexico, Central America, the Caribbean and Latin American countries in general. He and the Pentagon, along with the corporate exploiters of Latin America, are prime movers of the immigration crisis.

Kelly has been at Trump’s side during crucial points in negotiations on DACA. According to numerous reports, Kelly was with Trump in the hours before he met with Sens. Dick Durbin, a Democrat, and Lindsey Graham, a Republican, about a compromise resolution. It would have offered full status for Dreamers in return for a downpayment on funding for Trump’s wall on the southern border with Mexico.

While Trump was reportedly friendly to the proposal, Kelly thought it too moderate. He called on Republicans to attend a meeting to sink the potential deal.

Graham is a hardcore militarist, allied with Sen. John McCain, and a hawk for war against the Democratic People’s Republic of Korea.  But Graham wants to stop Trump from ruining the reputation of U.S. imperialism at home and abroad by preventing him from expelling 800,000 Dreamers. After Trump invited him to come to the White House with Durbin following a friendly phone call, the two showed up to find that immigration hawks were in the room along with Trump. That was when Trump went into his racist rage about “shithole countries,” referring to African nations, Haiti and El Salvador, and blew up the chance for any deal.

According to media reports, Kelly got on the phone before the meeting and encouraged Sens. Tom Cotton of Arkansas and David Perdue of Georgia, two anti-immigration fanatics, to come to the meeting. It was an ambush.

Afterwards, Graham spoke to the press to complain. According to an article by Jonathan Blitzer, someone “close to the White House” told him that “Miller and Kelly are to the right of the president on immigration. The two of them were with the president just before the Oval Office meeting with Graham and Durbin, and the president got really worked up.” (New Yorker, Jan. 17)

A similar event took place when Sen. Chuck Schumer went to meet with Trump. The only person in the room, besides Trump, Schumer and a Schumer aide, was Gen. Kelly. After the meeting, Kelly phoned Republicans to tell them that the deal was too liberal, even though Schumer reportedly offered Trump $20 billion for the wall.

According to another report, “Kelly, the retired four-star Marine who’d sat aside Trump during lunch … called Schumer. The outline discussed earlier in the day was too liberal, Kelly said, even with a discussion of Trump’s full border request. It wasn’t enough to keep the president negotiating.” (CNN, Jan. 20)

Having been in such a high position in the military hierarchy, Kelly has deep connections to the brass, both active duty and retired. Kelly does not function as an individual or in a political vacuum. In fact, he functions side-by-side on a daily basis with Secretary of Defense James “Mad Dog” Mattis, a retired Marine general who in 2004 infamously led the destruction of Fallujah in Iraq.

The ‘grownups in the room’

The capitalist press has praised Kelly, Mattis and National Security Advisor Lt. Gen. H.R. McMaster (active duty). The mainstream capitalist media and political establishment that have been fearful of Trump used to express sighs of relief about the military “grownups in the room” who would supposedly supervise or exercise a restraining influence on Trump.

One look at Kelly and it is clear who needs restraining.

There is another lesson inherent in the “government shutdown.” The  “essential services” that remain operational and fully functional are the hard core of the repressive forces of the capitalist state. To the ruling class, even a government shutdown must not interfere with the repression and persecution of the masses.

For example, the Border Patrol, ICE, FBI, military, courts and U.S. marshals largely remain open and fully functional. They continue to carry out raids, round up immigrants, prepare for military aggression, and spy on and hound progressives, the poor and the oppressed.

Meanwhile, according to the New York Times of Jan. 20, the lion’s share of the layoffs would take place in the social service agencies:

From a trade union point of view, this shutdown can be viewed as a government lockout of hundreds of thousands of workers, many of whom are under union contract and represented by the American Federation of Government Employees.

From a broader social point of view, it represents a lockout of millions of people who rely on government services that were to be shut down.

Fight back against criminalization of immigrants

The DACA fight is part of a larger assault by the Trump administration to criminalize immigrants. The Department of Homeland Security declared that basically all 11 million undocumented immigrants are “criminals” subject to deportation at any time. Their crime? Crossing the border to flee poverty and repression brought about by U.S. imperialism’s ransacking of their countries.

A further part of this attempt to criminalize the immigrant population was Trump’s cancellation of temporary protected status (TPS) for almost 262,000 Salvadorians, 86,000 Hondurans, 58,000 Haitians and 5,300 Nicaraguans.

TPS was granted by Washington in 1990 to immigrants fleeing war, the aftermath of natural disasters and other dangerous conditions in their home countries. Of course, these conditions were caused by forced underdevelopment, exploitation and death-squad governments created by U.S. imperialism in the first place.

Many of those with TPS have lived here for years. They have set down roots here. Have built families here, own homes, have children who are in schools, etc. That is because their status has been renewed at regular intervals.

The Mexican border was created by U.S. capitalism when it stole half of Mexico in 1848 and ran roughshod over Native lands. It has become a racist political barrier dictated by Washington and the bosses and bankers in the U.S. It has become the basis for endless repression and discrimination. And it has led to superexploitation of immigrant workers in the U.S.

The working-class movement and the oppressed here must answer Trump and the entire racist, anti-immigrant establishment with cross-border solidarity, with class solidarity toward all workers, no matter where they come from, in a common struggle against the exploiters.