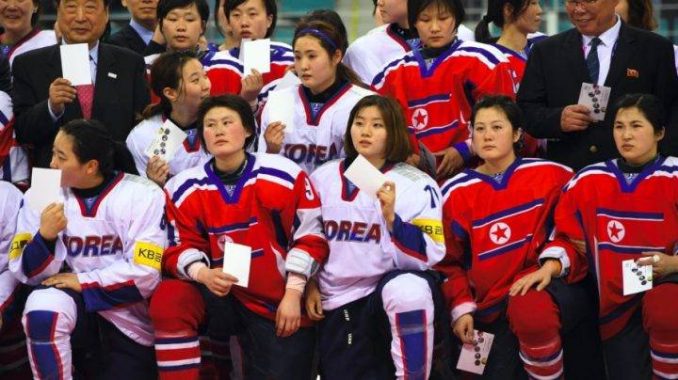 Typically Olympic Games are spectacles designed to fill the coffers of hotel chains, media moguls, sports equipment and clothing companies, and construction contractors. The cost of these extravaganzas is borne by the workers and poor in the cities and countries that host them.

But sometimes through the corporate buzz of flag waving and medal counts, a message of struggle appears. In the Mexico City games of 1968, two champions, Tommie Smith and John Carlos, mounted the winners’ platform, bowed their heads and raised their gloved fists in the iconic Black Power salute while the band played the U.S. national anthem. This symbolic act inspired millions of Black youth, many of whom had just faced thousands of cops, National Guard and federal troops when they rebelled in hundreds of cities against the government that was complicit in the brutal murder of the Rev. Dr. Martin Luther King Jr.

That powerful gesture earned these heroes the spiteful and racist wrath of columnists, commentators and politicians, which has echoed through the years to this very day, with bigot in chief Trump attacking kneeling Colin Kaepernick and his brave cohorts from many sports teams.

Usually the winter games are held in resort areas where the well-to-do frolic on the ski slopes. Very few athletes are invited to come from Africa, Latin America or the Caribbean, so nothing but the corporate message is likely to be expressed.

But already the 2018 Winter Olympics, to be held in Pyeongchang, south Korea, between Feb. 9 and 25, shows a marked difference. On Jan. 1, Kim Jong Un, chair of the Workers’ Party of Korea and leader of the Democratic People’s Republic of Korea, called for direct talks with the Republic of Korea — without the presence of U.S officials, whose troops have occupied south Korea for nearly seven decades. The talks, Kim proposed, would discuss joint Korean participation in the Olympic Games.

The south Korean leadership accepted the offer. The provocative joint U.S.-south Korean military exercises that were going to be held during the games were postponed.

Trump of course declared that this move was due to his increased brutal sanctions against the DPRK. At the same time he continues to threaten a nuclear first strike against that small country, which has recently fortified its defenses with a small number of nuclear weapons and missiles as a deterrent against the vast arsenal of U.S. imperialism.

Talks were held on Jan. 17 at the Demilitarized Zone separating the two states of Korea. They were then concluded at the International Olympic Committee headquarters in Lausanne, Switzerland, on Jan. 20. At the opening ceremony, athletes from both teams will march together under the Korean Unification Flag, which depicts the Korean peninsula in blue on a white background.

The women’s hockey team will be made up of members from both north and south Korea. According to a report in the Jan. 20 USA Today: “North Koreans will also compete in figure skating, short track speed skating, Alpine skiing and cross-country skiing after being given exceptional late entries by the International Olympic Committee.

“The North Korean delegation will also include 24 coaches and officials, plus 21 media representatives at the Feb. 9-25 Winter Games.

“The governments of North and South Korea were offered ‘sincere thanks’ by IOC President Thomas Bach announcing the agreement. ‘Such an agreement would have seemed impossible only a few weeks ago,’ said Bach.”

Also, two north Korean skiers with disabilities will compete in the Paralympics, held in March in Pyeongchang.

Obviously shocked by this successful diplomatic move by the DPRK, Trump and the Pentagon dispatched six nuclear-capable B-52 bombers to Guam. Secretary of State Rex Tillerson presided over a hastily convened meeting with 19 “allies” in Vancouver, Canada, on Jan. 16. He told the press that “we have to recognize that that threat is growing, and if North Korea does not choose the pathway of engagement, discussion, negotiation, then they themselves will trigger an (military) option.” (cnn.com, Jan. 16, CNN clarification)

China and Russia, both neighbors of the DPRK, were not invited to this meeting, and both countries condemned it as provocative when the north Korean government was making these Olympic overtures.

Meanwhile, mysterious missile “false alarms” were triggered, first in Hawaii on Jan. 13 and then in Japan on Jan. 16. Both are thinly veiled threats to north Korea that the Pentagon is still in “hair-trigger” nuclear attack mode, despite the peace initiative.

No matter what the sports outcome is at these Olympic Games, it is clear that the real obstacle to peace on the Korean peninsula is not the brave people of the DPRK, but rather the never-ending threats from the Pentagon and the Trump regime.