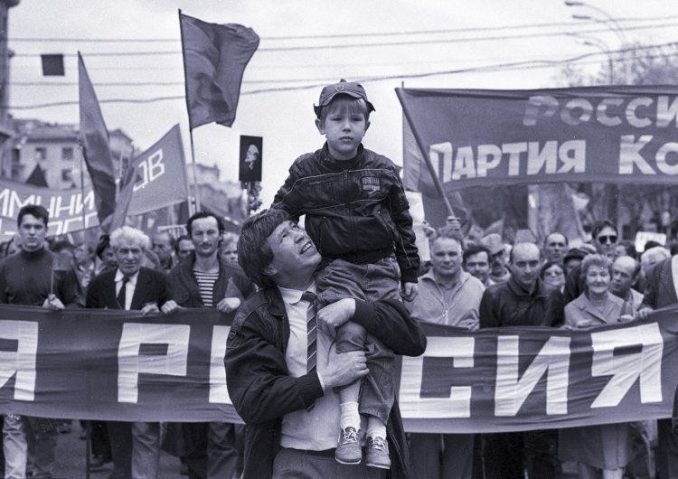 Victor Anpilov, carrying his son Sergey, at a demonstration in 1993. 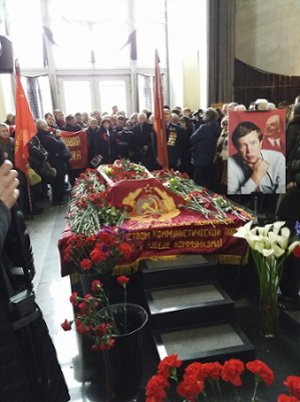 Anpilov, who stood at the forefront of the struggle against capitalist restoration in the USSR during the early 1990s, died Jan. 15 at the age of 72. Two days earlier he suffered a major stroke en route to a meeting to discuss which candidate leftists should back in the upcoming Russian presidential election.

Victor Ivanovich Anpilov was born in 1945 to a peasant family in the Krasnodar region of Russia. His father was a veteran of the Great Patriotic War — the Soviet resistance to German fascist occupation in World War II.

His early life reflected the opportunities that existed for urban and rural working-class youth in the Soviet Union.

As a child, Anpilov suffered the privations that affected many following a devastating war that cost more than 20 million Soviet lives. But the country rapidly rebuilt thanks to socialist planning.

After doing his military service in a Red Army detachment in socialist Cuba, Anpilov attended Moscow State University and became a prominent international journalist. He covered struggles in Latin America, spending several years in Nicaragua during the 1980s when the Sandinista government was fighting the U.S.-backed Contras.

His time in Latin America — studying the Cuban Revolution and other movements for socialism and national liberation — was a turning point for him as a communist.

Anpilov learned the importance of revolutionary engagement with the masses, of militant fightback and street struggles. This was a keystone of the Bolshevik Party that led the 1917 Russian Revolution, but had been lost under the bureaucracy that guided the Soviet workers’ state after Lenin’s death.

These lessons served him well upon his return to the Soviet Union, where a dangerous effort to restore capitalism was under way, headed by the likes of Communist Party Secretary General Mikhail Gorbachev and U.S. imperialist favorite Boris Yeltsin. Anpilov saw that parades and resolutions were not enough — militant, mass action by the working class was needed to confront the powerful enemies of socialism.

In 1990 Anpilov was elected to the Moscow Soviet. The following year, he helped found the Movement of the Communist Initiative, which criticized Gorbachev’s appeasement of imperialism abroad and moves toward capitalist restoration at home.

Anpilov published the first communist, anti-Gorbachev newspaper, Molynia (Lighting), distributed during the 1991 May Day celebration on Red Square. After a failed coup against Gorbachev in August by forces in the Soviet government, Anpilov organized “human chains” to protect Lenin’s mausoleum from pro-capitalist elements. And on Nov. 7, the anniversary of the Bolshevik Revolution, he was one of the initiators of an unauthorized demonstration of communist forces in the capital.

At the end of that year he founded the Labor Moscow mass movement, which later became Labor Russia, and was also a founder of the Russian Communist Workers’ Party.

Workers World correspondent Bill Dores recalled: “I met Victor in the grim days of 1992, when Workers World Party sent me to Moscow to make contact with communists resisting the restoration of capitalism. I found him outside the gates of the Kremlin, where he was leading protests against the Yeltsin regime.

“Victor’s confident words brought hope to revolutionaries the world over who were reeling from the overthrow of Soviet power in the land of the October Revolution. They cut like a knife through the bravado of the capitalist media gloating over the destruction of the USSR.

“I still remember his vivid message to our 1993 May Day rally in New York: ‘The working class never betrayed socialism. Once again this May 1st, we will see the columns of workers marching to Red Square. Their flags will be red, their slogan eternal — Workers of the world unite!’”

Dores recounted how “we watched with bated breath that May Day as Labor Russia defied Yeltsin’s police to march in the streets of Moscow. A week later the regime kidnapped Anpilov in revenge.” He was tortured by Yeltsin’s goons.

Bloody October and after

Anpilov was freed in time to play a leading role in the popular uprising of September-October 1993, when tens of thousands of workers took to the streets of Moscow to defend the House of Soviets and the Soviet Constitution. Armed workers and youth took up positions around the so-called “Russian White House” to defend what remained of Soviet power.

With the full backing of the U.S. government — headed by Democrat Bill Clinton — Yeltsin’s tanks shelled the House of Soviets and his fascist OMON (special forces) troops slaughtered the Soviet defenders. Hundreds were rounded up and murdered in a Moscow stadium in scenes reminiscent of dictator Augusto Pinochet’s coup in Chile. Anpilov and other leaders were jailed.

“Here in the U.S., we marched outside the Russian Embassy to demand freedom for Victor Anpilov and the Moscow anti-fascist fighters,” recalled Dores, who coordinated the Campaign in Solidarity with Labor in Russia. “And we were thrilled when the prison gates opened in the amnesty of February 1994.”

Following the defeat of the 1993 uprising, the floodgates were opened to untrammeled privatization. Much of Russia’s vast industrial capacity and natural resources were sold off at cut-rate prices to Wall Street and other imperialist powers. Thousands of factories and other workplaces shut down, never to reopen. Hunger and homelessness soared. Life expectancy plummeted.

During these painful years, Anpilov and Labor Russia led several mass marches of workers from Russia’s industrial centers to the capital. He also led protests against Russian military cooperation with NATO and the Pentagon.

The situation became more complicated with the election of Vladimir Putin to the presidency in 1999. Putin’s rise signaled a shift in power toward more nationalist elements of the new capitalist oligarchy, away from the bootlicking Yeltsin’s cabal. Although there have been several outbreaks of popular resistance in the 2000s, nothing has yet rivaled the mass fight-back movement of the 1990s.

Anpilov’s later years reflected the difficulties of being a revolutionary who lives through a great defeat. He struggled to find ways to reach the masses that he knew were so crucial to the struggle for socialism, and this sometimes set him at odds with other sections of the left. But he never surrendered his vision of humanity’s communist future, nor his determination to fight oppression and injustice at every opportunity.

Today, as Russia’s communists work to find unity and build a new revolutionary movement, Anpilov’s example is key — especially his historic contribution of “bringing home” the importance of militant mass struggle with an engaged working class.

This could be seen at the Jan. 20 memorial in Moscow, where speakers included several Anpilov protégés who are today key figures in the Russian left – including Left Front coordinator Sergey Udaltsov, United Communist Party International Secretary Darya Mitina, and Stanislav Ruzanov, who succeeded Anpilov as head of Labor Russian in 2012.

Another Anpilov protege, Maria Donchenko of the Vanguard of Red Youth of Labor Russia (AKM-TR), wrote: “Our relationship was not always simple, but I want to say the main thing — he [Anpilov] was the one who raised the banner in the fall of 1991, the day after the Communist Party of the Soviet Union was banned, when everyone was hiding in corners, he came out and raised the banner. History demanded that such a person appear, and Victor Ivanovich was that person.”

A message from Workers World Party to Anpilov’s memorial said: “Today, on the cusp of new challenges and opportunities for communists in Russia and around the world, we reflect on Victor Ivanovich’s courage, his selfless sacrifices, and most of all, his role as a tribune of the people — a leader who came from the masses, who always listened to them and learned from them, while also teaching a Marxist-Leninist understanding of the class struggle.

“Comrade Victor Anpilov’s work, unfinished, remains to us. The seeds he planted will grow and flower in new revolutionary generations that lift up the red banner, as he did, and carry it forward to new victories.”

The writer was an organizer of the Campaign in Solidarity with Labor Russia. Biographical information for this article came from statements by the United Communist Party, Russian Communist Workers’ Party and Labor Russia.