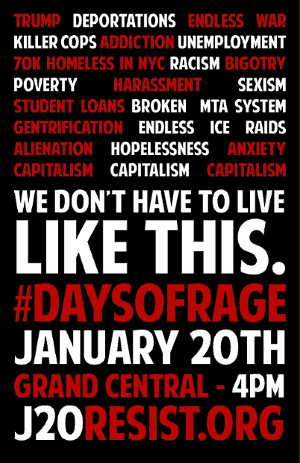 Despite a brutal year of attacks on the working class, especially on the most oppressed, the spirit of rebellion cannot be crushed. One year after the inauguration of Donald Trump, militants will hit the streets to show the ruling class that we refuse to bow down to racism and fascist terror.

Taking its cue from our comrades in Palestine, #J20Resist, a coalition of forces formed in the months leading up to the 2017 inauguration, is calling on activists across the U.S. to participate Jan. 15-20 in “Days of Rage against Trump and Capitalism” preceding the one-year anniversary.

The coalition calls on all U.S. militants, wherever they are in the belly of the imperialist beast, to raise in their community the banner of a better world. Now more than ever, it’s important that we do so. Not only to strike fear in the hearts of the ruling class, but to show members of our class that they are not alone, that we are not defeated, and that, despite exhaustion, pain and sorrow, revolutionary optimism lives on.

Despite virulent attacks, the last year has not been without its heroic moments from which we draw energy and inspiration.

We saw hundreds of fellow activists arrested at the inauguration, made to stand in the cold for hours while they were kettled, assaulted by the Washington, D.C., cops and others, and then dragged through a year-long prosecution process while the state attempted to outlaw dissent.

We’ve seen white supremacist terror in Charlottesville, Va., that ended the life of Heather Heyer and hospitalized dozens of other anti-racist activists. We’ve seen an escalation in raids by Immigration and Customs Enforcement agents who have ripped apart the immigrant community. We’ve seen police brutality continue unfettered, while the U.S. rattles its saber louder and louder at the oppressed of the world.

And how does our class respond? After announcing a ban on immigration from seven countries, many with a majority Muslim population and all of them under attack by U.S. imperialism, thousands of people occupied airports around the country.

Two days after the attack in Charlottesville, activists in Durham, N.C., took matters into their own hands and tore down a racist Confederate statue, sending waves of hope to all who had been demoralized in the wake of white supremacist terror. After a year of solidarity inside and outside the courts, the first six #J20 defendants were found not guilty of all charges.

These are just three notable moments. The vast, multinational working class continues to show, on a daily and weekly basis, that it will not back down to racism and repression. Activists are chaining themselves to ICE vans, taking the streets against police brutality and war, and breaking the silence on sexual assault.

From Jan. 15-20, let us show the world that we are still here, united, fighting for justice. That we cannot be stopped. That we believe we will win.

Appropriately, the Days of Rage will begin on Martin Luther King Jr. Day, where we will rally in true remembrance of a leader of the Black freedom struggle who stood in solidarity with striking workers, spoke out against the U.S. war in Vietnam and had his life cut short by the Trumpists of yesteryear.

Many different issues will be raised during the Days of Rage, including union busting, racism, police terror, sexual assault, violence against trans people, U.S. imperialism and its unending war drive, and state repression of activists like the #J20 defendants.

The week also corresponds with a court hearing Jan. 17 in Philadelphia for Mumia Abu-Jamal, the former Black Panther and one of the world’s most famous political prisoners, who may finally, after more than 36 years of persistent struggle, be up for a retrial.