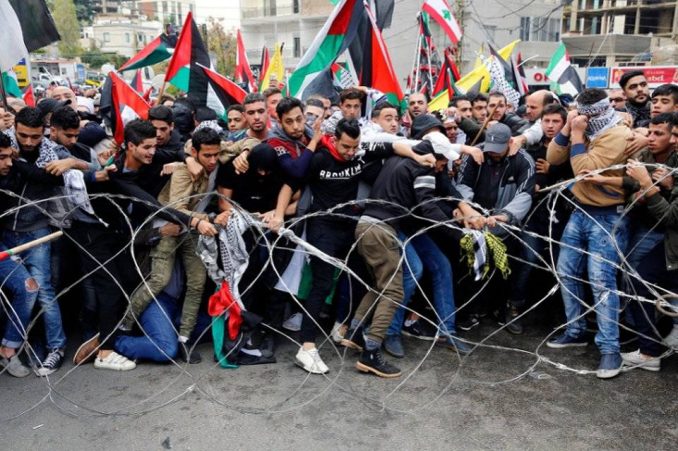 Worldwide protests by Palestinians and those in solidarity with Palestine gave a strong answer to the Trump administration’s provocation that it would move the U.S. Embassy to Jerusalem and drop all pretense of being an “honest broker” between Israel and Palestine. Around the world the people picked up the challenge hurled by the hated U.S. president.

In Palestine itself, including the West Bank, Gaza and within the Israeli state’s pre-1967 borders, Palestinians challenged the repressive Israeli authorities, clashing with police and military. In Beirut, Lebanon, police erected a two-mile circle of barricades and barbed wire and then employed tear gas and water cannon to block people from reaching the U.S. Embassy. In the far-away Indonesian capital of Jakarta, 10,000 people besieged the embassy there.

On the same Dec. 9-10 weekend, in Turkey’s major city, Istanbul, thousands of demonstrators took the streets two days in a row. Al-Jazeera of Dec. 11 quoted demonstrator Ananda Sereka: “I feel like I should defend Palestine because I don’t know any other way to defend them. … This is the least I can do.”

Al-Jazeera also reported demonstrations in Rabat, Morocco, where protesters “yelled slurs against Trump and carried banners saying Jerusalem belonged to Palestine.” In Srinagar, Kashmir, a city of 1.1 million people, residents closed their shops and stayed home in protest. In Karachi, Pakistan, “hundreds of protesters marched towards the U.S. Consulate” before riot police turned them back.

Three thousand gathered in Dhaka, Bangladesh, while other protests took place in Cairo, Egypt; Tehran, Iran; and Kuala Lumpur, capital of Malaysia. There, thousands gathered before the U.S. Embassy, including Palestinians from the diaspora and Malaysians of all origins.

Solidarity actions also took place in the imperialist countries: in London, Brussels, Paris, Rome and Berlin in Western Europe, in Canada and in cities all over the United States.

In Beirut, along with the siege at the U.S. Embassy, the Hezbollah organization held a rally of thousands in the city’s southern suburbs to mobilize its supporters against the U.S. move. In 2006, Hezbollah had stunned the world by holding off an Israeli invasion of Lebanon.

Hezbollah leader Hassan Nasrallah called Trump’s decision yet another aggression against the Palestinian cause. He said his group and its allies would renew their focus on the Palestinian cause after the victories in Syria and elsewhere, and called for a united front “in the field.” He said he hoped the “foolish decision” meant the “beginning of the end” of Israel. (AFP, Dec. 11)