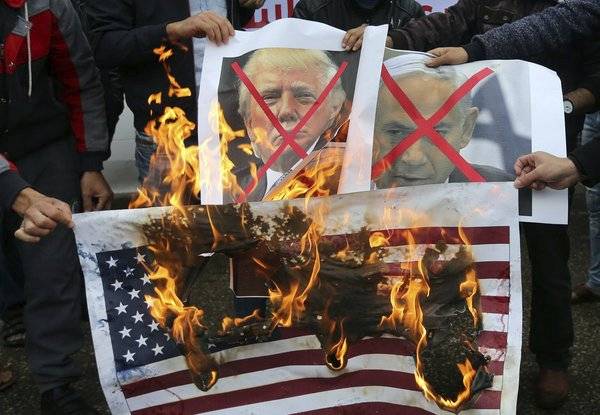 Trump’s recognition of Jerusalem as the capital of Israel puts an end to the decades-long deceit that Washington has cultivated of being a so-called “honest broker” between the Palestinians and the Israelis.

This decision tramples on the sovereignty of the Palestinian people and their right to self-determination as an occupied people under the boot of the Zionist apartheid regime in Tel Aviv.

Trump has openly and squarely put Washington on the side of the butchers of Gaza. Instead of endlessly stalling the Palestinians with U.S.-brokered negotiations, Trump has unabashedly sided with the oppressors in Tel Aviv.

‘A bullet of mercy’

The Popular Front for the Liberation of Palestine, a Marxist organization with a long record of struggle against Tel Aviv and its U.S. sponsors, had this to say:

“Further, the Front considered that Trump also launched a ‘bullet of mercy’ on the so-called two-state solution, the settlement project and the delusions of the peace process. It called upon the Palestinian leadership to learn the necessary lessons from the devastating experience of reliance on negotiations and U.S. domination.” (pflp.ps, Dec. 6)

The Democratic Front for the Liberation of Palestine had a similar reaction: “The American aggressive step … saves the capital of the State of Palestine from the Israeli-American robbery by returning to the Palestinian national program and abandoning the illusion of a political solution sponsored by the United States.” (dflp-palestine.net, Dec. 7)

The decision to recognize Jerusalem as the Israeli capital and its aftermath also illustrates the agony of the U.S. ruling class and its delicate dance with Donald Trump.

On the one hand, the bosses and bankers are in love with Trump’s tax giveaways to the corporations and the rich. They thrive on his deregulation of business rules and environmental degradation. They wholeheartedly support his appointment of right-wing judges and heads of agencies who want to destroy what limited protections these agencies were charged with enforcing.

On the other hand, the mainstream capitalist class, and especially their braintrust in the universities, think tanks, media and the political establishment, are virtually apoplectic over his reckless, mindless destruction of their cunning and deceitful diplomatic and political methods carefully built up over many years.

Almost the entire U.S. establishment, as well as the European Union and NATO, are in an uproar. The British and French imperialists, the Russians and others actually called for a United Nations Security Council meeting to condemn Washington’s recognition of Jerusalem as the Israeli capital.

The imperialists are upset because for decades they have been dangling the prospect of East Jerusalem as the Palestinian capital as a carrot to continue the “peace process.” The status of East Jerusalem was supposed to be settled in a “final status” agreement some time in the future.

The Trump move on Jerusalem has sparked imperialist moaning about the danger to the so-called two-state solution and fueled speculation about a one-state solution whereby the Palestinians would be absorbed into the racist Israeli state. For the imperialists to speculate on restructuring  Palestinian statehood is a gross violation of self-determination. This is a matter strictly for the Palestinians to decide through their popular organizations.

Of course the “opposition” to the Trump proposal by the rulers of Saudi Arabia, Egypt, Jordan, etc., is not in the least serious. While they cannot publicly collaborate with Trump on this matter, they will deal with the State Department and the Pentagon freely under the table and continue to collect military and CIA aid.

The anger and disapproval of the imperialists have nothing to do with sympathy for the cause of the Palestinian people. First, it comes from their fear of rebellion in Palestine and the Middle East. But equally important, it comes from what they fear will be the end of Washington’s role as a so-called “honest broker” in the region.

It is this role that has allowed diplomatic deception for over four decades. This “honest broker” reputation, carefully cultivated, has given cover to  U.S. clients and puppets in the region, from Cairo to Riyadh, to Amman and Beirut, as well as to the other imperialist jackals, to participate in continued support for Tel Aviv’s oppression of the Palestinians. This has been done under cover of the so-called “peace process.” Now, Trump has ripped the mask off the phony impartiality of Washington, and all the imperialists and their stooges are horrified.

To show the total lack of strategic thinking by Trump — which is what bothers the ruling-class establishment — he is in the midst of trying to cement an anti-Iran coalition, centered around Saudi Arabia, Cairo and the Gulf States. But his recognition of Jerusalem as the Israeli capital is going to make it more difficult for Trump’s allies to openly embrace him in this maneuver.

Under cover of this so-called “peace process,” the Pentagon has given $3 billion a year in lethal military supplies to the Israeli Defense Forces. Washington has supplied well over $100 billion in jet fighters, killer helicopters, missiles, missile defense batteries, tanks, armored personnel carriers, bulldozers, tear gas, stun grenades, anti-personnel weapons, etc., to use against the masses. Under the U.S.-supported occupation, the Palestinians have had to fight mainly with stones and slingshots against the occupiers.

During the decades of the U.S.-sponsored “peace process,” Tel Aviv has continued to expand settlements in the West Bank. There are now 200,000 settlers in East Jerusalem, compared to 350,000 Palestinians. Thousands of Palestinian homes throughout the West Bank have been destroyed over the decades. Olive groves have been ripped out. Checkpoints have been established where Palestinians have to wait hours to go to work or visit relatives while being scrutinized by racist Israeli soldiers.

This is an example of what the “peace process” has brought to Palestine: “When the Israelis and Palestinians first began peace talks after a 1993 interim agreement, the West Bank settlers numbered a little over 100,000. Today they total around 400,000 and live in about 130 separate settlements.” (National Public Radio, Dec. 29, 2016)

Trump took this unilateral imperialist measure in response to the call of some of his Zionist billionaire backers, such as Sheldon Adelson, a fellow casino mogul who was a major donor to his campaign.

Trump also timed the recognition of Jerusalem to coincide with the Roy Moore senatorial campaign in Alabama. Moore is backed by Christian Zionists in evangelical churches, which have a large constituency in Alabama.

The recognition of Jerusalem has also served to draw attention away from the numerous charges of sexual harassment of teenagers lodged against Moore. And it also helped Trump fire up his reactionary base among the bosses, the petty bourgeoisie and sections of the workers.

By embracing Roy Moore, Trump and his former chief aide Steve Bannon have aligned with an open fascist in the mold of former Gov. George Wallace of Alabama. Moore has praised the era of slavery “when families were together.” He says that the U.S. is the center of evil because it recognizes same-sex marriage. He is a theocrat who was twice removed as a judge in Alabama — once for refusing to remove a monument to the Ten Commandments he had installed in the lobby of the state judicial building in Montgomery and once for refusing to recognize same-sex marriage.

Trump has gone so far to the right that even reactionaries are worried about his discrediting the capitalist system, especially among the younger generation. The Mueller investigation, carried out under the diversionary premise about Trump-Russian connections, is closing in on him. The ruling class has begun a whispering campaign about his mental health and fitness for office. The New York Times ran a major piece looking into Trump’s daily behavior, including his egoism, self-centeredness, disregard of reality, reliance on television, etc.

Their reaction to Trump’s recognition of Jerusalem must be put in the context of the inner struggle within the ruling class over their own chief executive.

Palestine and right to self-determination

The Jerusalem question has unleashed a torrent of speculation about the dimming prospect for a “two-state solution.” When the bosses call for a two-state solution, they are calling for something that will preserve both the security of their Israeli clients and the subjection of the Palestinian people.

In addition, the Zionists under Israeli Prime Minister Benjamin Netanyahu and a whole series of his predecessors have never given any serious consideration to a sovereign Palestinian state. The constitution of Netanyahu’s party, the Likud party, calls for a single state under Zionist rule, including all of the West Bank.

Be that as it may, the Leninist position on the right of self-determination calls for the Palestinian people to determine how they want to structure their own sovereign state in their homeland, including the right to return to lands stolen from them, beginning in 1948 through 1967 and up to today.

The structure of the Palestinian state must be decided by the Palestinians themselves, not by false leaders manipulated by imperialism, but by the popular masses through their genuine grass-roots organizations and leaders.

Because of the ironclad support for Tel Aviv by the Pentagon and U.S. imperialism in general, plus the retreat of the bourgeois Arab leaders, the relationship of forces at the moment is not favorable to the Palestinian struggle. Under these conditions, if the Palestinians themselves — not false leaders — feel the need to compromise, revolutionaries must recognize their right to make tactical concessions as they see fit.

But under no circumstances can there be any compromise by revolutionary supporters of the Palestinians on their right to self-determination, including the absolute right of return and the right to set up a genuinely sovereign state as they see fit.