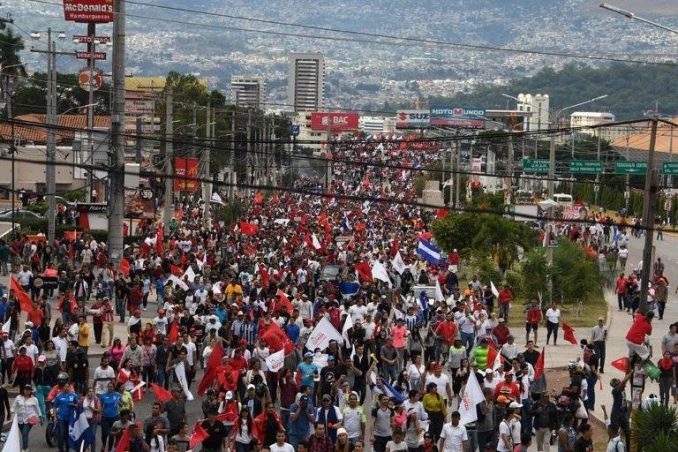 Dec. 4 — Amid substantial allegations of mass electoral fraud, the Honduran government is moving to impose the dictatorship of Juan Orlando Hernández on the people for another four years, using its U.S.-backed Honduran military forces.

Tens of thousands of people defied the army-police takeover of the capital of Tegucigalpa in a mass march and rally. People around the country are erecting roadblocks and flaming barricades, blocking toll booths and occupying strategic bridges in the port city of La Ceiba.

Salvador Nasralla Salum, candidate of the Opposition Alliance Against the Dictatorship (the Alianza), called for a general strike on Dec. 5 and called on “all members of the armed forces to revolt against your bosses. You all over there, you shouldn’t be there, you should be part of the people.” (CBC News, Dec. 4)

Washington and Honduras’ wealthy oligarchs back the current president and right-wing National Party candidate Hernández, referred to as JOH. Washington, under President Barack Obama and now under Donald Trump, has given tens of millions of dollars to the heavily militarized Honduran state.

Soon after the Nov. 26 election, Nasralla appeared to be the clear winner.

The Supreme Electoral Tribunal (TSE) announced that, with 57 percent of the ballots counted, Nasralla had 45.7 percent of the vote, with 40.2 percent to Hernández and the rest to other candidates. Records of the Alianza, which had its own poll workers at every polling place, also show Nasralla winning by 5 percentage points.

Yet, after some suspicious technical problems lasting as long as 10 hours, only after four days did the TSE claim that, as the rural votes were tallied, JOH retook a tiny lead. JOH had appointed all TSE members. The Alianza refuses to accept the TSE’s offer to recount only around 1,000 ballot boxes.

In 2013, the TSE declared Hernández the victor over Xiomara Castro Zelaya, candidate of the LIBRE (Liberty and Refoundation) Party.

International human rights observers, including this writer, witnessed and heard firsthand testimony of widespread fraud, voter obstruction, bribery of the extremely poor and intimidation that included physical assaults and assassinations of LIBRE candidates and campaign workers.

Xiomara Castro Zelaya is the spouse of former President Mel Zelaya, who was ousted in a 2009 U.S.-backed coup. The people resisted the 2009 coup and took to the streets en masse after the 2013 stolen election.

Under JOH’s rule, the Honduran police and army increased their repression over that of the illegitimate coup regime of 2009-13. Rights activists, Indigenous communities, Afro-Hondurans, women, teachers, journalists, LGBT people, children and youth, and trade unionists have been terrorized and murdered by police, military and right-wing paramilitaries. Murders included those of environmental activist Berta Cáceres and human-rights leader Margarita Murillo.

This year, the people again challenged the dictatorship. Formed earlier this year, the Alianza consists of three opposition parties: LIBRE, the Anti-Corruption Party and the Party of Innovation and Unity.

Nasralla was the presidential candidate of the Anti-Corruption Party in 2013. Xiomara Zelaya was his running mate this time. The Alianza is essentially a center-left bloc against the dictatorship.

Protests demanding “¡Fuera JOH!” (JOH out!) have rocked the country since this repeat of the 2013 stolen election.

JOH’s regime responded by suspending the Constitution for 10 days, imposing a 6 p.m. to 6 a.m. curfew and threatening to enforce an “anti-terrorism” law that could impose a 6- to 12-year prison sentence for protesting. It allows prosecutors to charge journalists for incitement to “psychological terrorism.”

Police and the military have fired on protesters with water cannons and paint guns — using the paint to later identify demonstrators. Scores have been wounded and detained. Government forces have reportedly killed at least eight people.

Told that the TSE forwarded its records on the election to the U.S. Embassy, Juan Barahona, coordinator of the National Front of Popular Resistance, said: “Yes, I do understand why. … It’s because we are a country dependent on the [U.S.] American Empire.”

Barahona said the U.S. interest in Honduras involved its central location in the Americas. Over decades, the Pentagon has launched military interventions against Cuba, Nicaragua, Guatemala, El Salvador and the Dominican Republic. With the Pentagon’s sights trained on Venezuela, Palmerola Air Base in Honduras is the military facility with the longest airplane runway in Central America.

The Dole and Chiquita agribusiness monopolies have huge plantations in Honduras. Honduran company Dinant, whose shareholders include major world finance capitalists, is a big producer of African palm oil.

Since the 2009 coup, the reactionary regimes have handed over large tracts of land and waterways to foreign mining interests, areas formerly held communally by Afrodescendente and Indigenous communities.

On Nov. 29, the Platform of Social and Popular Movements of Honduras (PMSPH) issued a five-point communique declaring its “absolute and categorical rejection of the fraudulent electoral process that legitimizes the continuity of the model of repression and death, directed by Juan Orlando Hernández.”

The platform called for “a permanent mobilization” of the people, exhorted communities to organize their own protection from the military, held the JOH government responsible for human rights violations and charged the U.S. government and its servants such as the Organization of American States with complicity. The communique concluded with a call for international solidarity.

Solidarity is growing. The Venezuelan government has unequivocally condemned the electoral coup. Within the U.S., organizations around the country have signed a letter of protest circulated by the Honduras Solidarity Network and held protest demonstrations. Parties of the revolutionary left in the Dominican Republic came together to issue a joint statement demanding “sovereignty, democracy and justice for Honduras.”

Grevatt was a member of the International Action Center observer delegation to Honduras during the 2013 stolen election.