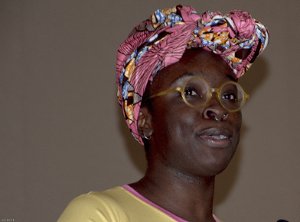 In the wake of Harvey Weinstein’s exposure as Hollywood cisgender scum who has sexually assaulted women for decades, victims have been speaking out about their experiences of sexual harassment and assault, noting the culture of silence and victim-blaming that forces many survivors to live in the shame of their trauma. This social media campaign has been seen as a rallying cry for feminists and the continuous work that must be done to fight toxic masculinity. But the unfortunate reality of the movement is that it has been a space for white women only.

The #metoo campaign was started 10 years ago as a nonprofit by Tarana Burke, a Black woman wanting to support young women of color facing sexual trauma and harassment. As Burke noted once in an interview: “Sexual violence doesn’t see race or class, but the response to it does.” (vox.com, Oct. 28)

What this current surge of mass disclosure has proven once again is that our society only cares about victims if they are rich and white. White privilege means that they can take a campaign created by a Black woman, whitewash the fuck out of it, and throw the voices of Black women and femmes away without remorse.

Because what is continuously and intentionally left out, not only from this campaign, but all conversations around victimization, are the stories of Black and Brown, queer and trans, and the violence from white men, white women and white supremacy, and how all of this is inherently tied to capitalism. It is why these mainstream feminist movements are of no benefit to us. At its core, mainstream feminism is anti-Black, anti-queer and anti-trans because it relies on the same oppressive principles under capitalism in order to remain valid.

We know this to be true when we look at the history of the “women’s movement.” The 1890s in the U.S. has been dubbed “the era of woman” and seen as a key time in defining the onset of the women’s movement. It was a time when middle-class white women were increasing their visibility in the public sphere to prove themselves capable of engaging in male-dominated spaces. They stood against social evolutionist theorists who maintained (straight, white, cisgender) manhood as superior.

Those who supported the struggles of these white women (such as the women’s suffrage movement) often linked that work to an evolutionary progress that posited the colonial capitalist U.S. as superior to the “primitive” cultures of Asia and Africa. These feminists appealed to the white male ruling class in a way that necessarily rejected Blackness and queerness, through adhering to traditional gender norms as a way to “preserve the white race,” and through emphasizing white women’s differences from women of color in order to align themselves with white men.

The placing of Black queer and trans femmes as everything that is “not white” is an ongoing product of slavery and colonialism we see to this day. As Black feminist thinker Patricia Hill Collins has said: “White women’s sexuality could not be constructed as it is without corresponding controlling images applied to U.S. Black women.” (“Black Feminist Thought,” 2002)

I would add that this also applies to Black women in Africa and globally. We are, ultimately, not part of the category of “woman/ womanhood” and therefore unable to claim palpable narratives of women’s oppression because “woman” was never meant to include us. And so mainstream conversations and work around gender and sexual oppression are limited to the experiences of cisgender white women.

For the past month and a half, Black and dark-skinned New York City strippers have been organizing a strike, speaking out against racism and colorism in the industry. Discrimination means dark-skinned Black women have had consistent difficulty getting or keeping jobs because of the systemic preference to hire white and Latinx dancers. Dark-skinned strippers are either not allowed to dance on high-earning nights, or barred from the VIP sections. Celebrity bartenders (often white or light-skinned and with body types not only unrealistic, but rooted in anti-Blackness) are brought into the clubs, earning their money on the backs of Black femmes and our labor.

I just want to re-emphasize that this strike is not just an issue of stripper rights, or the conditions that sex workers face. It is specifically dark-skinned Black women and femmes fighting against the manifestations of

anti-Blackness in sex work. Our voices and our struggles are not part of mainstream feminist “the future is female” bullshit because at the same time that white women are speaking out against cisgender-hetero-patriarchal violence, they are benefitting from the oppression of Black femmes (especially those of us that are dark-skinned, trans and/or fat).

What we need is a revolutionary socialist and revolutionary feminist movement that recognizes that the capitalist system encourages and benefits from every oppressive system. We must recognize that any form of work or activism that concedes to capitalist ideals, no matter how well-intentioned, “intersectional” or “radical” its claims, is fundamentally flawed.

Liberation will never be allowed to flourish under this system because the survival of the capitalist patriarchy is dependent upon our oppression. Under revolutionary feminism and socialism, the future will be queer, trans and Black.