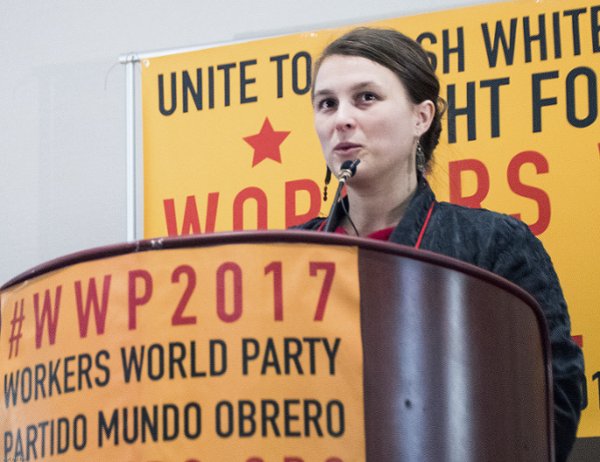 This talk introduced the First Plenary of the Workers World Party national conference in Newark, N.J., on Nov. 18.

It’s been a wild year for everyone. We started off seeing thousands in the streets for Jan. 20, when Trump was sworn in as president of the United States. What has followed is a year of historic fightback.

Starting with J20, when protesters militantly raised the banner of anti-racism, anti-imperialism and anti-capitalism, we have seen our class take the streets again and again to try and push back whatever avalanche of terror this regime sends our way.

The JFK and Hands off Syria mobilizations are good examples. Charlottesville, Va., is a good example. Durham, N.C., is a great example. And while our presence in the streets has been militant, immediate and vanguard-like in its formation, it has not stopped the response of the state, which has likewise been forceful.

More than 200 protesters were kettled and arrested on J20. They are facing up to 80 years in jail on felony riot charges. Our comrades and friends from Jacksonville to New York were beaten and arrested for insisting that the U.S. must keep its filthy hands off Syria.

We watched bricks thrown, hammers literally falling on us, gas and a murder happen in Charlottesville.

I remember sitting on the B38 bus crying as I watched my comrades arrested in Durham. I remember hearing them chant as they were led away in handcuffs, my heart heavy with pride and love.

Now, in the news, I see that the ruling class wants to accuse me and my people of being puppets of some foreign government. They are reviving the old red-baiting tactics of the 1950s, insisting that nobody has anything to complain about in a white-settler nation founded on genocide and slavery — it must be bankrolled by Russia.

Our class struggles against gentrification, poverty, addiction, incarceration, the racist police — and things seem to get harder and harder. So, in the depth of this despair, so deep in the belly of the beast, what gives us hope?

But when we stand in the streets and chant, “I believe that we will win,” we are chanting with hope in our hearts. It’s a feeling in your chest, that dizzy love for our class.

So, in spite of all this pain, what makes someone viewing 2017 feel a sense of deep pride and love in the revolution that took place in Russia 100 years ago? It was not the first revolution where oppressed people threw off their chains. It was certainly not the last.

The challenges we face seem gargantuan. But our class has faced all this and more and achieved real victories. They have shown us the way. Their battles won and incredible odds surmounted give us hope. We have no choice but to succeed. It’s not socialism or barbarism, it’s socialism or death to my comrades.

When we talk about the Russian Revolution, or the Haitian Revolution, the incredible Vietnamese victory over U.S. imperialism, Mao winning decades of struggle, Fidel arriving in Havana victorious, the Soviet flag hoisted over the Reichstag during the liberation of Berlin, we are talking about family history.

In Russia, the peasantry and working class were hardly literate, and lived in the most squalid of conditions. They were in the middle of what was then the bloodiest war in all of European history, with youth after youth being sent to the front to die the most undignified and useless of deaths. There were no laws to protect people’s right to assemble, their right to free speech, etc. How then, did our forces win the sweetest of victories in 1917?

It was because they were organized. They were a tightly disciplined and yet totally adaptive organization, a Leninist party — the first — led by the best and brightest of the working class and oppressed. They smashed through whatever the ruling class put in their path because the Soviet Union was a revolution whose time had come. The people had no choice but to get organized.

Moreover, they understood the dire necessity for the vanguard to win the trust of the working class and oppressed. By raising the banner of peace, land and bread, through tireless militant effort and organizing, through an untold body count, the Bolsheviks helped deliver a power to the world that would defeat Nazi Germany and, by its very nature, enforce a balance of power that resulted in peaceful development and progressive gains throughout the world.

It’s only through organization, through the party form, that we can accomplish our history’s most necessary task: smashing white supremacy, abolishing capitalism and the immediate implementation of socialism. The stakes are too high to discount organization. I’m not overstating our situation to say that humanity stands at the brink of destruction.

It’s our job, those of us who are revolutionaries, to band together and slay this beast. No one else will do this. It really is up to us.

I remember what Comrade Larry Holmes said at our open house in New York a few weeks ago — a party like ours is able to accomplish so much with small numbers because we are organized. We strategize. We tirelessly have each other’s backs.

They’ve been telling me that socialism is dead since the collapse of the Soviet Union, but we see quite clearly in 2017 that the very idea of socialism still invigorates our class and strikes terror into the hearts of our enemies.

We must take ourselves and our task seriously. The incredible growth of this party in this phase is a vindication and affirmation of our line on the national question and special oppression, our analysis of capitalism at a dead end and our culture of consultation. Every new candidate, every new friend, every new subscriber or reader of our newspaper is a vote of confidence from our class.

I look at the incredible caliber of my comrades who have been in this struggle for decades or just a few months and I feel confidence. We are an educated, dedicated, loving, contemplative and militant cadre. I look at the hundreds of thousands who have taken to the streets against white supremacy with love and hope. On the anniversary of the centennial of the Russian Revolution, looking at their conditions and ours, I believe we are again coming up on a turning point in history.

As Comrade Larry said at the last conference, this Trump presidency has really ripped the mask off capitalism. The youth is at a record with its distrust and hatred of this death machine. We may indeed have the opportunity to avenge Fred Hampton, but only if we organize to build a revolutionary, combat-ready party. The future is ours to win.