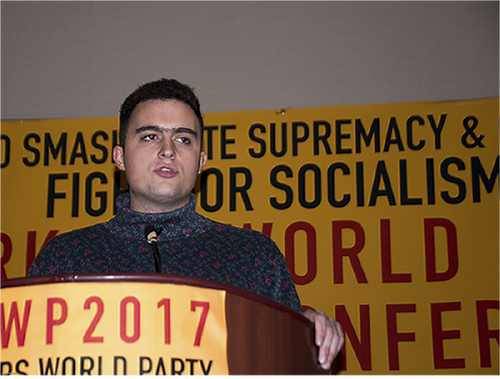 To reduce the legacy of the October Revolution to a victory of labor over capital, to peasant over landlord, is to overlook one of its greatest achievements. Perhaps even more important than those magnificent triumphs was the triumph of colonized over colonizer. The Bolshevik Revolution was the greatest anti-colonial revolution up to that point in history, in terms of both scale and accomplishments.

The revolution transformed the “prison house of nations,” an empire where the oppressed nations were flagrantly denied fundamental rights, into a union of equals where every people could develop and prosper along their own path. Pivotal to this development was the Soviet of Nationalities, a wing of the Soviet Union’s bicameral legislature that granted equal representation to every nation. Imagine the progress this kind of tool could unleash on a country such as ours, where we still live under the yoke of a slave masters’ constitution? The first leader of the Soviet Union following Lenin’s death, Josef Stalin, was formerly People’s Commissar for Nationalities. This put him in charge of ensuring the right of oppressed nations to self-determination within the new revolutionary society. Stalin was a Georgian from a very poor background. Georgia was one of the oppressed nations within the Russian empire. One month after the revolution, Stalin wrote the “Appeal to the Moslems of Russia and the East,” calling on Muslim people to find common cause with the revolution and unite against European colonialism. Many other leaders of the revolution came from oppressed nationalities, such as the founder of the Red Army Leon Trotsky, who was Jewish.

The tremendous battle against colonialism waged by the revolution spread far beyond the borders of the Soviet Union. In one of the first acts of the revolution, the Bolsheviks called for a just and democratic peace to end the first world war. They addressed this statement primarily to the people of the warring countries, calling on all sides to respect the self-determination of all peoples. The revolution continued to expose the imperialists by publicizing secret treaties they had written. This included the Sykes-Picot agreement, a conspiracy between the French and British empires to divide West Asia between them.

The Soviet Union grew into a center of organizing and support for people fighting colonialism around the planet. Through offering solidarity with education, diplomacy, trade, training and arms, the USSR became the midwife to an era of national liberation. This solidarity and the geopolitical counterbalance offered by the USSR benefited many struggles that weren’t Marxist-Leninist or were even opposed to the USSR. The movements, states and victories of this era were just as much gains of the October Revolution as the progress made within the territory of the USSR. Their fates were inextricably linked, something we saw clearly after the counterrevolution in the Soviet Union.

On the heels of the counterrevolution, the imperialist bourgeoisie led by the United States began the most genocidal colonial campaign since the 19th century. No corner of the Earth was spared its wrath. Under the ridiculous pretexts of such utter nonsense as a “war on terrorism,” “humanitarian intervention” and “regime change,” the imperialists marched forward on a scorched-earth offensive. Entire regions were stocked with occupation forces and whole states were liquidated. New bourgeois terminology such as “failed states” came into being as means of explaining away the massive destruction.

In West Asia a new Sykes-Picot was in development. Contrary to the popular notion that the war against Iraq, the destruction of Libya and the war on terror were failures, these wars and their so-called failed states were a long-contrived means to redivide the region. Each war fed into another; counterrevolution against the remnants of national liberation was consciously fomented within the destruction.

This strategy culminated in the completely genocidal war against Syria. Syria is and was the most powerful bastion against imperialism in the Arab world. It was a long-time ally of the Soviet Union and the very foundations of its society are pluralism, secularism, pan-Arabism, Arab socialism and independence. Syria consistently defended Palestine with diplomatic and material support. Part of its land has been occupied by Zionists for over 40 years, but it has never made peace with them. It was key to facilitating the axis of resistance, an alliance among anti-imperialist forces in West Asia. All these factors made Syria the biggest obstacle to imperialist plans for a new Sykes-Picot.

The imperialists invaded Syria utilizing counterrevolutionaries they had been fostering for decades. Forces such as al-Qaida and the so-called Islamic State were directly created, funded, supported and directed by U.S. imperialism to liquidate Syrian society. The U.S. and its allies hoped they could weaken Syria enough to come to the aid of counterrevolutionaries, as they had in Libya. Pressure from the masses and other world powers, such as Russia, was great enough to avoid this disaster. The imperialists increased their support for the various death squads in the country and used them as a pretext, as they have in many other places, to begin bombing and sending soldiers. Their bombing campaign worked in tandem with the contra forces, destroying more of Syria every day.

Did the Syrian people or the state they labored so hard to maintain make any concessions in vain hopes of easing the pressure? No, they did the opposite. The new constitution of 2012 doubled down on their core principles. Part of the preamble reads: “Syria has occupied an important political position as it is the beating heart of Arabism, the forefront of confrontation with the Zionist enemy and the bedrock of resistance against colonial hegemony on the Arab world and its capabilities and wealth.”

This understanding lives in the hearts of the Syrian people. They fought for decades against imperialist-sponsored reaction to maintain the culture, unity and prosperity of their people and the peoples of the Arab world. That is why Syria today stands near complete victory over counterrevolutionary forces. That isn’t to say Syria’s allies weren’t instrumental. The solidarity of the axis of resistance, Hezbollah and the Islamic Republic of Iran has been imperative. We can’t deny the importance of Russia’s support either.

Russia’s support has a dual character, the most obvious being that Syria is Russia’s only direct access to the Mediterranean Sea. The other is the fact that the success of a new Sykes-Picot and the transformation of Syria into a breeding ground of reaction would have catastrophic consequences even the imperialists can’t foresee. Imperialism is in a struggle to the death against contraction and that is why it must expand. This expansion is becoming so destructive and volatile that even capitalist countries like Russia must begrudgingly confront it or be consumed.

The near victory of Syria over imperialism is the greatest victory of the oppressed in decades. The foundation of modern imperialism is a momentum built through destruction. The Syrian people and their allies halted this momentum in a region at the core of their strategy.

You can see the imperialists’ devastation and bewilderment in their orientation toward the region. Ceaseless threats pour over Iran every day. The landmark nuclear deal they negotiated against genocidal sanctions imposed on them is being threatened by a furious United States. In the midst of unprecedented internal chaos, Saudi Arabia kidnapped the Prime Minister of Lebanon and has declared war on the entire country. This effectively pushes the Lebanese  state apparatus and society to further embrace the resistance axis. At the same time, Riyadh is threatened by missiles from the revolutionaries in Yemen they have failed to crush.

Imperialism isn’t only being hindered by armed struggle. Socialist China has fought imperialism by building infrastructure and investing in oppressed nations. Nearly all continents have benefited from the development offered by socialism with Chinese characteristics. China’s policies contradict the underdevelopment, austerity, dependence and destruction imperialism sows to maintain profit.

Imperialism is on the ropes. For the first time since the socialist bloc was destroyed, the correlation of forces is shifting and the imperialist superstructure is losing coherence. This isn’t to say the struggle will be easy from here or that it will collapse in on itself. An enemy that feels like it has nothing to lose is an extremely volatile and dangerous one. This is illustrated clearly by the countless threats pouring from Washington this year. Nearly every day a different country is threatened with annihilation in the most crass way. The loss of strategic conflicts and its own internal contradictions leave the future uncertain. We must be prepared for the desperate measures that will be taken in a vain attempt to recoup losses in West Asia and elsewhere.

We have to capitalize on the victories our comrades around the world have won for us. We may be at different barricades but we are all in the same struggle to the death against imperialism. We must be prepared to defend our allies around the world at all costs. The battle cry of Lenin lives on in our struggle today: “Workers and oppressed people of the world unite!”