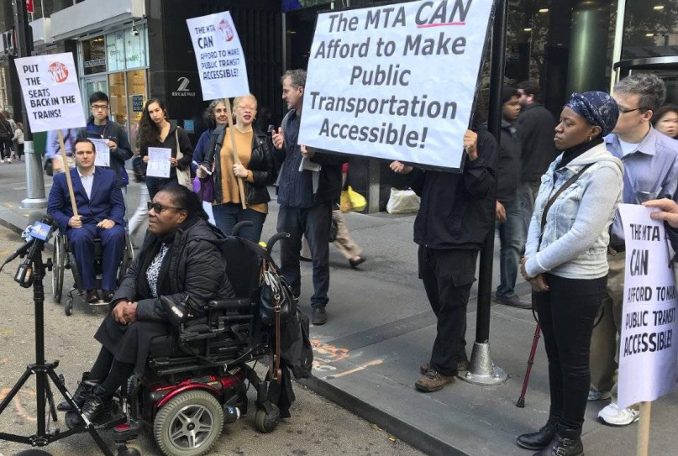 New York — The state comptroller announced Nov. 9 that the Metropolitan Transportation Authority’s expenditures would soon require it to raise fares in addition to the usual fare hikes every two years.

Riders are being squeezed while the 113-year-old system crumbles and remains out of compliance with the Americans with Disabilities Act of 1990.

Transit advocates who spoke to the MTA board on Nov. 15 said they knew where the money was being spent. “It’s going to Wall Street. It’s putting cops in the subways, arresting Black and Brown people,” said Christian Cobb, member of the People’s MTA. The PMTA advocates for 100 percent accessibility, an end to racist policing in the subways, more buses and trains, free fare, and justice and union rights for all transit workers and Transit Workers Union Local 100.

“I’m not here to speak to these people [on the board] because as we said before, they don’t give a damn. They don’t represent the people. These are the people,” Cobb said, pointing to members of the public who responded with applause.

From January to March, more than 26,000 people were arrested for “theft of service.” More than 91 percent of those arrested for fare evasion were people of color. (NY Daily News, June 16) The Community Service Society reports “young Black men (ages 16-36) made up half of all fare evasion arrests, but represent only 13.1 percent of poor adults” in Brooklyn. (tinyurl.com/ycc2uwpm)

Three of every four people stopped for fare evasion are simply given a summons, like a parking ticket. But they must pay a $100 fine.

“Wall Street is looting public transportation — that’s the real theft of service,” said Tony Murphy of PMTA, who only addressed members of the public.

Mary Kaessinger, a member of Disability Pride and PMTA, asked the board to provide more buses.

Disability rights advocate Edward Yood said the MTA should add portable metal ramps in the subway system, as used by New Jersey Transit. Those ramps allow people in mobility devices to comfortably roll between platforms and trains, which are often not at the same level. Yood also asked for more litter baskets and more workers to get rid of the rats in the subway system, as well as inclusion of wheelchair users on the MTA board. The lack of inclusion places the MTA in violation of the ADA, he noted.

“The MTA should be a service, not a business,” Yood repeated four times to the board.

The People’s MTA will participate in the Dec. 3 action at noon in Herald Square for International Day of People with Disabilities. The group will also convene on Dec. 13 in front of MTA headquarters at 2 Broadway in lower Manhattan for a rally and news conference at 9 a.m. It will then move to the 20th floor for the 10 a.m. public comments portion of the board meeting.