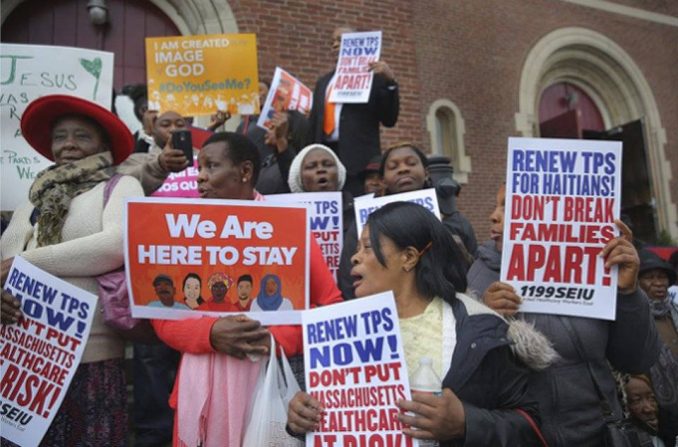 Acting Secretary of the Department of Homeland Security Elaine Duke announced on Nov. 20 that 59,000 Haitians would lose their Temporary Protective Status next July 22 and would have to then return to Haiti.

Beyond all the human emotional losses, disrupted families and lost jobs, Haiti faces a serious economic loss: remittances from the 59,000 Haitians living under TPS in the United States make up 15 percent of Haiti’s gross domestic product.

If this denial of TPS is upheld, Haiti faces a disaster imposed by U.S. imperialism.

TPS allows foreign nationals from countries where there have been political, economic or physical catastrophes, like earthquakes or hurricanes, to live and work legally in the U.S.

Some unions, with the assistance of the national AFL-CIO, had already opened up a campaign to preserve TPS.  On Nov. 16, UNITE HERE, Painters and Allied Trades, Bricklayers, UFCW and the Iron Workers publicly launched Working Families United, an immigrant worker advocacy coalition that plans a major campaign to extend TPS.

The Service Employees Union, which represents a large number of Haitian workers in health care, has sponsored or participated in protests to preserve TPS in Boston, New York and Florida.

Trump and his entourage were due in Mar-a-Lago, Trump’s luxury resort, on Nov. 21. UNITE Here paid for buses from all over south Florida to bring workers in the tourism and hospitality sectors as close as the Secret Service would permit. They chanted “Shut it down,” played drums and cymbals and made their militant presence known.

Hundreds of articles, statements and editorials in the corporate media — even an editorial in the New York Times — challenged the reasoning of DHS. The Institute for Justice & Democracy in Haiti stated, “DHS could not overcome the mountain of evidence establishing that Haiti has recently endured precisely the extraordinary blows contemplated by the TPS statute, specifically an unchecked cholera epidemic and October 2016’s Hurricane Matthew.” The DHS ignored facts on the ground to attempt to justify its anti-immigrant agenda.

During Trump’s presidential campaign meeting at Miami’s Little Haiti Cultural Center on Sept. 16, 2016, he said that conditions in Haiti were still terrible six years after the earthquake of 2010. He then promised, “I really want to be your greatest champion, and I will be your champion.”

Like most of his promises, it hasn’t been and won’t be kept.

‘Down with the army!’

In Cap-Haïtien, Haiti’s second largest city, teachers haven’t been paid for two months. When students took to the streets, piling up desks and chairs to block the main routes leading north and south out of the city, cops opened fire and used tear gas to drive demonstrators off the streets.

Students chanted, “Down with the army, long live education, long live schools!” (Vant Bèf, Nov. 15). Cap Haïtien administrators plan to fire all teachers who aren’t working because they haven’t been paid and replace them with members of the Bald-Headed Haitian Party (PHTK), which is currently running the government.

Haitian President Jovenel Moïse used the commemoration of the battle of Vertières to mark the re-establishment of the Haitian army, which was disbanded in 1995, by holding a parade.

The battle of Vertières was the concluding battle of the Haitian revolution in November 1803, when its revolutionary army seized the hills around Cap Haïtian, forcing the French occupiers to surrender to a British fleet blockading the port.

François Duvalier, a dictator who ruled Haiti as president between 1957 and 1971, was the first to use this commemoration to glorify Haiti’s bourgeois army. This army’s origins go back to the armed forces set up under the 1915-1934 U.S. occupation.

Opposition to the re-establishment of the repressive army was a major issue raised in the massive demonstrations that shook Port-au-Prince and other large Haitian cities in November.

Another sign of the volatile state of Haitian life is the massacre of at least 12 residents of the Gran Ravin neighborhood of southern Port-au-Prince by the police in mid-November.  Two cops lost their lives in the gun fight and many people’s property was destroyed. (Haïti-Liberté, Nov. 22).