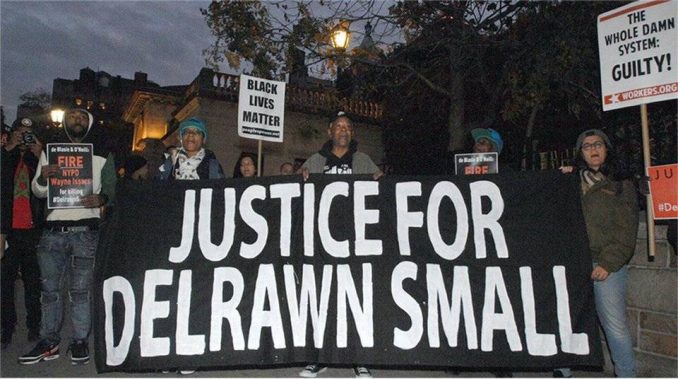 In Manhattan, more than 100 people protested yet another cop being acquitted in the death of an unarmed person.

A Brooklyn, New York, family devastated by the acquittal of an off-duty Black officer in the shooting death of their relative, who was also Black, said that the only race that mattered in this killing was that of their loved one, yet another victim of unrelenting police violence toward people of color.

In a video Small was seen falling to the ground after being shot three times on July 4, 2016, in Brooklyn, after his car had been cut off on the road by Isaac. Zaquanna Albert, Small’s partner, says she was in the car with two children when she witnessed Isaacs pull out a gun to shoot Small.

The New York Times reported Attorney General Eric Schneiderman brought charges against Isaacs under an order from Gov. Andrew Cuomo to investigate when police kill unarmed civilians. “It is the first prosecution under the directive,” according to the paper. (Oct. 25)

That Isaacs is Black has raised questions about how racist the NYPD really is.

But Small’s family was clear: “I don’t give a flying f—k what color Wayne Isaacs is because my black-ass brother isn’t here,” said Small’s sister, Victoria, to a multinational crowd of more than 100 at a Union Square rally on Nov. 9. Speakers demanded the NYPD fire Isaacs.

Relatives called the rally to draw attention to the unjust, racist system that lets police officers kill on camera with impunity. To drive home the point, the crowd marched around Union Square, the site of many demonstrations against injustice. Organizations and activists who showed up to support the family included retired state Assemblyman Charles Barron, who asked the crowd to “organize for a revolution.”

Small’s brother, Victor, said the “not guilty” verdict emphasized that Small’s life — like many Black lives — didn’t matter. Family members described sleepless nights and nightmares since the verdict. They also said they suffered lost wages because they sat through the two-week trial.

“[The cop] should be in jail right now, but he’s at home with his family and we’re out here in the cold,” Victor said.

Imani Henry, Workers World Party member and activist working against gentrification and policing, said the Black community doesn’t win justice through elections, including the most recent one where Mayor Bill de Blasio was re-elected.

During his first term, de Blasio asked the family of murdered Staten Island resident Eric Garner to wait for the U.S. Department of Justice to finish its investigation before any NYPD internal investigation of Officer Daniel Pantaleo. Pantaleo, who has a history of substantiated complaints against him, was seen on video using a banned chokehold that killed Garner. Garner’s final plea, “I can’t breathe,” became a rallying cry for justice among Black Lives Matter activists.

Henry called for the abolition of the police. He pointed out that policing started as slave patrols in this country to protect wealthy white landowners’ “property.” That included African people bound into involuntary servitude until the abolition of slavery and the end of the U.S. Civil War.

“Police do nothing but murder our people, drive people out of their homes,” Henry said. “They don’t do anything but serve Wall Street.”

Video evidence has so far counted for nothing as families across the country mourn loved ones who have died at the hands of racist police forces.

The Smalls said they’ll continue their fight against the racist system and for justice for Delrawn Small.